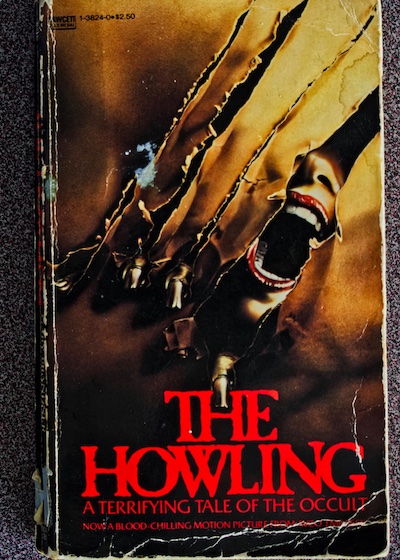 When I travel, I take the train. A few days before Halloween, I found myself at an Amtrak Depot that offered a book exchange. Leave a book; take a book. They had a jar for donations to the staff’s holiday party. Though the selection wasn’t large, it included Gary Brandner’s The Howling. This werewolf novel sounded like the perfect read for Halloween. I didn’t have a book to leave, but I dropped a couple bucks into the jar. The train came. During the daylight hours, I watched the passing scenery. When night fell, when all I saw in the window was my own reflection, I opened The Howling and began to read.

Published in 1977, The Howling inspired the 1981 movie of the same name. Gary Brandner (1930-2013) was a back-burner writer who specialized in horror fiction, but he’s best remembered for his Howling trilogy. Years ago, I saw the movie, but I remember very little about it. I do remember, that I found it an okay movie, nothing great, but it entertained me for its duration. Now that I read the novel, I know this passable quality originated from it. The novel, like the movie, was okay, but it left me with no desire to read the sequels.

It failed to age.

That thought ran through my mind several times during the reading. As it was published in the 1970s, it was also set in the 1970s. It felt set in the shadow of the disco movement, where everyone was young, beautiful, and prone to wear tight polyester slacks. The characters were engrained in this youthful, materialistic, and superficial culture. That alone is not a fault. No doubt several novels, short stories, and movies created and set at the same time are still relevant, but they offer themes that transcends their time. The Howling never presented such themes. Maybe we can forgive that, since it makes no pretense of being great literature, but I believe even mindless, supermarket novels need something more than plot and characters to engage the mind.

The novel’s worst sin lies in the characterization of Karyn, the protagonist. She’s a damsel in distress. She began the novel as a victim; she ended the novel as a victim. She spent much of the time between waiting for someone to come rescue her. It’s reassuring–perhaps progressive for 1977–that some of the people she turned to for rescue were women, but that doesn’t excuse that Karyn herself was a wimp. She cried for help really well. Perhaps better than any other female protagonist I’ve met in years. But I need something more from my protagonists–male or female–than a loud scream. True, in the climax, she combated the werewolves, but that was only in the shadow of the man who came to save her.

I don’t read werewolf novels often. When I read horror fiction, which I like, I prefer ghost stories and vampires. Werewolves have never invoked my imagination. Perhaps that explains why The Howling failed to thrill me, but I believe the fault lies in the weak protagonist. I like the premise behind The Howling, but its execution was horrible. If you’re into werewolves, I’m sure there are better novels to read than The Howling.