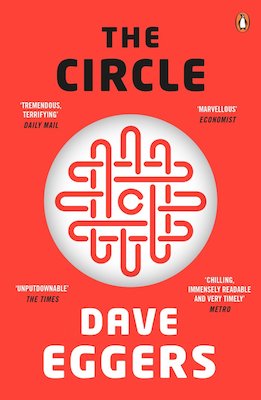 About halfway through The Circle, Mae Holland’s exboyfriend, Mercer, called her boring. Yes, she is boring, but having another character point it out did little to save this novel from itself. Mae is the protagonist; she’s not supposed to be boring. Her goal is to have a successful career at the Circle, the hot new tech company that’s reinventing the world. Once she’s hired on, to achieve this goal, she becomes the world’s biggest yes man. (Yes woman? Yes person?) She says yes a lot. I don’t believe there’s a perfect formula for creating an exciting protagonist, but in Mae Holland’s case, the occasional no would’ve done wonders.

Since he’s been writing since the 90s, had worked as an editor of a literary magazine, and had several novels and nonfiction books published, including the Pulitzer nominated memoir, A Heartbreaking Work of Staggering Genius, Dave Eggers should’ve known better. He has the experience and knowledge to know what makes good fiction. So what happened in The Circle? He chose an important theme: technology, social media, and the lost of privacy. It’s the theme that could’ve made The Circle this generation’s Nineteen Eighty-Four. But Eggers is no George Orwell, and more to the point, Mae Holland is no Winston Smith.

When I love a novel, I often have a hard time explaining why I loved it, but when I hate one, the reasons stampede through the mind. Let me begin with a minor point, the phase the Circle. Eggers repeated this phrase throughout the novel, on nearly every page, if not several times on each page. Though I’m not a grammar purist, the phase bothered me every time I read it. Since Circle is the name of the fictional company, saying or writing the Circle is akin to saying or writing the Facebook or the Google. It’s a proper noun, and we don’t put articles in front of proper nouns. Since neither Eggers nor his editors took the time to remember this simple grammar rule, it hints that the book was rushed into publication. Perhaps he needed to meet a deadline. Or perhaps Eggers felt the need to get his name in print again. For whatever reason, The Circle felt rushed. It felt unpolished.

A symptom of this is how uninteresting Mae is as a main character. I didn’t like her. That’s not a problem, because I didn’t like Holden Caulfield or Jay Gatsby either. It’s not necessary for me to like Mae, but it is essential that I relate to her, understand her concerns, and sympathize with her conflict. Mae inspires no sympathies; nor does she require any. She’s content. Since her goal is a successful career at Circle, which she started on page 1, and nothing in the novel threatened that, she’s arguably the happiest protagonist I’ve never encountered. She has some frustrations, of course, like we all do, but no continuous conflict. The real conflict, of course, is Circle and its agenda of total surveillance against society. That’s the important conflict, the conflict that I wanted to read about, but Mae was ill-chosen as the viewpoint character for that conflict. She lacked both the broad vision to care about what was happening in society and the motivation to fight it.

The driving force for total surveillance was Eamon Bailey, one of the Three Wise Men who ran the company. He believes that “privacy is theft.” He believes in a world where cameras and other high tech devices would witness any wrong doing, crime and corruption would cease. A credible argument since people stopped robbing banks once we put cameras in them. (Oh, wait!) It’s a fallacy, and it’s okay, even desirable, for literary characters to have some delusions. But it’s the job of the protagonist to push back against this delusion, to create conflict, but Mae never pushed back. So the conflict never materialized. There was a dramatic scene towards the end of the novel, which proves Eggers knows how to write, but it was too little and too late. Long before we reached the climax, I gave up on enjoying The Circle.

So why did I bother reading it? A movie adaptation starring Tom Hanks and Emma Watson will be released in 2017, and I read it in anticipation of this release. I’m hoping that Hanks and Watson and the filmmakers can find the drama and conflict that the subject matter deserves. I have a theory that good novels make bad movies but bad novels makes good movies. So I’m hopeful that the movie will be good, especially since Hanks tend to do an excellent job with whatever role he’s playing. As for the novel, I think you can skip it and wait for the movie.