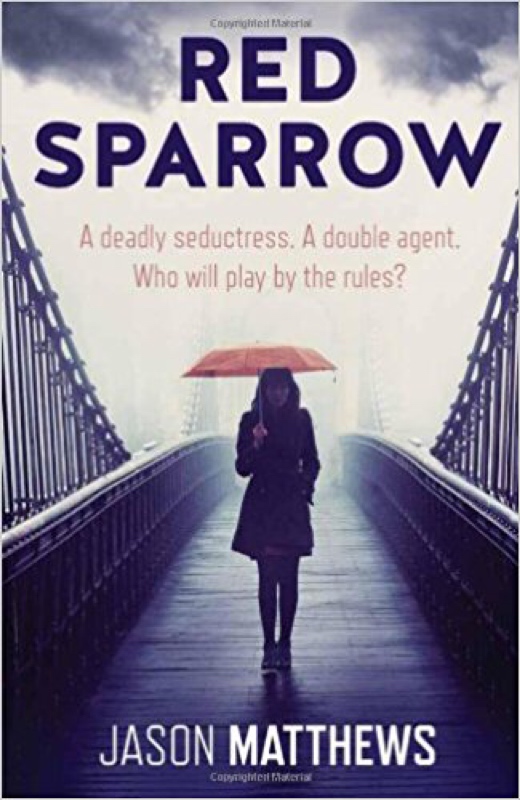 Though set in modern times, when Putin is president of Russia, Red Sparrow reads like a Cold War spy thriller. As Jason Matthews, the novelist who wrote it, tells us in the narration, although the geopolitics had changed, the game remains the same. Nations keep secrets; their rivals struggle to learn them. This is a spy-versus-spy thriller that kept me on the edge of my seat, kept me turning the pages, and kept me in suspense to learn what’s next. Though it has its weaknesses, they never undermined the novel’s strengths.

Jason Matthews worked for the CIA for thirty-three years. This background gives his writing authority and realism. Along with character development, especially of the titular Red Sparrow, Dominika Egorova, that authority and realism are the novel’s best strengths. Its main weakness, however, is a plot that is at time slow paced and other times unfocused. It was never dull or confusing, but after I laid down the novel and began contemplating it, I found myself struggling with the most basic literary question: Who is the protagonist?

The title, her character development, and her dramatic–even traumatic–character arc tell me that Dominika is the protagonist, but there were long stretches in Red Sparrow where she was absent. She wasn’t just off-stage; she was so far removed from some events in this novel that it’s doubtful that she ever knew of them or that they ever impacted her life. In terms of presence, Nate Nash feels like the protagonist. He’s a CIA agent who suffered failure early in the novel and needed “something big” to get his career back on track. Sounds like the protagonist to me. But though his character development was as complete as Dominika’s, his character arc was less dramatic, even nonexistent. He survives the novel unchanged. Though that doesn’t disqualifies him as the protagonist, he’s always a less interesting character than Dominika. In the end, I concluded that they are both protagonist, dual protagonists, following two plots that intersect and entwine like grapevines. Both storylines are essential in order to understand the events of Red Sparrow, but I think Matthews should’ve done a better job of weaving them together.

When she wasn’t on page, I missed Dominika. She’s a young Russian woman, a ballerina by training, who suffered an injury that ended her dancing career. Needing a new career to support herself and her mother, she lets her Uncle Vanya, a high official in Russian espionage, recruit her into service. Patriotic, she strives to serve Russia and to become the best spy she can be. Since her male colleagues saw her as a beautiful woman, they didn’t take her seriously, so there’s a feminist theme in Red Sparrow, as she struggles to prove herself as competent, if not more competent, as them despite her gender. She’s a proud woman, bitter over the lost of her ballet career, as well as other events, but she is also brave and intelligent.

In the context of the novel, a sparrow is a female spy trained to use sex as a weapon to manipulate and compromise targets. When her uncle insists she trains as a sparrow, she feels disgusted and disrespected, but since he holds her financial security in his hands, she has no choose. This training and the expectations she would use it made Red Sparrow erotic. There was a lot of kissing scenes in it, but few of them were sexy. Most of them were the wrong type of sex, the type of sex that reminds us how messed up the world is. It’s the sex of manipulation and abuse, even rape. These scenes were essential for understanding Dominika’s mindset throughout the novel, her motivations, her reasons for making some of the decisions she made, but there were so many that they started to feel redundant. Matthews gave us a few scenes of lovemaking to balance these abusive scenes, but there were too few to really balance them, and they came with their own troublesome dilemma. During one scene, I laughed. Not Matthews’ intention, I’m sure, but he was waxing poetry, and it didn’t work for me.

As important as the sparrow training was in the novel and in Dominika’s characterization, I found myself uninterested in it. Far more interesting was the contest between Dominika and Nate, her CIA counterpart and the target she’s sent to Helsinki to compromise. Though it was clear within the first few chapters that they were on a collision course, they met late in the novel–almost halfway through. By then we had two characters, professional spies, equal in intelligence, dedication, and skill, and equal in our–the readers’–sympathies. Anything could happen. What did happen surprised me and turned the novel into a far more dangerous contest. It’s that contest that kept me turning the pages. It’s what I best remember about the story. Once the novel past it’s midpoint, the sparrow subplot felt more like a very long prologue than an essential part of the story. So much so that I wonder about the title. Red Sparrow is a good title, a title to sell books, but it exaggerates the significance of her being a “sparrow” has to the greater plot. Not once in the book, at least not once that I remember, was she referred to as Red Sparrow. Not even, as I expected when I started to read, as a codename.

I wish Matthews had gone through the novel a couple more times to smooth out the plot. I think he could’ve cut pages and made it a much stronger story. Despite that criticism, I enjoyed this novel. It has its flaws, yes, but it tells a thrilling story about a fascinating character. It’s a spy novel, but you don’t have to be a fan of espionage fiction to enjoy Red Sparrow. It’s far from a must read, but if you’re looking for a novel with grip, Red Sparrow is it.