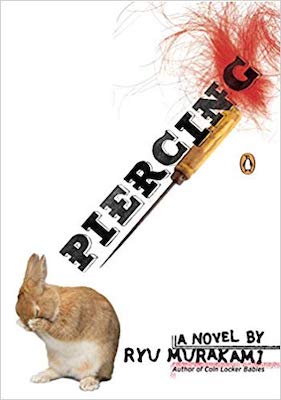 Piercing begins with a chilling scene and intensifies from there. It’s an unrelenting, violent novel that refuses to turn a blind eye to its characters’ deranged compulsions. It’s a novel about compulsions, but not the run-of-the-mill compulsions that cause most of us to overeat, drink too much, or binge out with Netflix for seven hours. The compulsion Kawashima Masayuki feels is to commit murder. Ryu Murakami places us in Kawashima’s mind and in the mind of his intended victim, Sanada Chiaki, who suffers her own unhealthy compulsions. Piercing tells the brutal conflict between the killer and his victim.

At 192 pages, Piercing is the latest short novel I’m reading in my survey of novellas. This project began in late February, but my heart attack in March delayed its execution. Now, as May begins, the project is back on track, somewhat reduced from its original conception, but still fulfilling its goal of improving my reading discipline. Piercing is the penultimate novel in this survey. The final book, which I’m currently reading, is Cinnamon by Syrian writer Samar Yazbek. I’m looking forward to sharing my opinion of it with you, but I’m also looking forward to returning to the longer novels that are my usual preference to read.

Published in 1994 and translated into English in 2008, Piercing was writing by Ryu Murakami. Born on February 19, 1952, he grew up in Nagasaki, but in 1972, he moved to Tokyo. He wrote his first novel, Almost Transparent Blue in 1976, while still in college. Since finishing college, he has worked in several art forms, including music, film, and fiction writing. In 1999, he founded the e-magazine JMM, and he’s still its chief editor. His other novels include Coin Locker Babies (1980), 69 (1987) and In the Miso Soup (1997).

A small living creature asleep in its crib. Like a laboratory animal in a cage, thought Kawashima Masayuki. He used the palm of his hand to shade the penlight so that it illuminated only the baby’s form, leaving the rest of the bedroom in darkness. Leaning in closer, he silently mouth the words Fast alseep. As Yoko’s pregnancy had progressed and the fact that he was actually going to be a father began to sink in, he’d worried that the baby might have difficulty sleeping. Kawashima had suffered from insomnia since elementary school, and, after all, his blood would run in the child’s veins. He’d heard it was normal for newborns to sleep virtually around the clock; in fact, he seemed to recall some child-rearing expert describing sleep as an infant’s ‘job’. What could be more tragic, then, than a baby insomniac?

Though looking forward to returning to longer narrations, the survey of novellas reminded me how powerful concise writing is in the hands of a master. Murakami is a master. From the opening paragraph, quoted above, to the final line, I couldn’t wait to get to the next page. His powers lie in his ability to describe complex scenes with few words. Who doesn’t see Kawashima bending over the crib and looking at his baby? Who doesn’t recognize this scene? Even I, who had never been a father, relate to it. But after reading a few more paragraphs, we realize that Kawashima isn’t a typical father and this isn’t an innocent scene of a father’s loving gaze on his newborn.

That’s the second, more relevant and telling of Murakami’s skill–his willingness to invite us into a mind we would rather not visit. It’s like witnessing a fatal traffic accident. As we stand on the sidelines and watch, we don’t want to see the blood on the tarmac, but we find ourselves unable to look away. We know it’s horrible to be fascinated by what we’re seeing, but a part of us thrills at the experience. We take in every sight, sound, smell! We crank our heads to see more–even as we dread what our eyes might see. That’s the experience Murakami creates inside Kawashima’s point-of-view. Though we don’t want to know how a killer thinks, we keep reading, because we need to know! Our curiosity refuses to let us put the book down. Our compulsion keeps us turning those pages.

Yes, I said compulsion. I told you before that this is a novel of compulsion. Of course, I was referring to the characters’ compulsions, but it also applies to the reader’s compulsion to keep reading. You know those novels you can’t put down? The ones we call page turners? It’s late, your eyes are heavy, and you must get some sleep before that big presentation in the morning. But you finish a chapter. Just one more chapter, you tell yourself. And after that chapter, Just one more!– As it was for me, I bet Piercing will be for you.

She rolled on to her side and reached for the CD player remote. She hit POWER, saw the little green light come on, and pressed PLAY. It wasn’t the CD she was expecting. She liked to listen to strings first thing on awaking and could have sworn she’d put in a Mozart disc before going to sleep, but oozing out of the speakers now was the theme song from Wild at Heart, with a tenor sax that dripped like molasses over her nerve endings. It was music she liked to listen to when masturbating. It’s weird I don’t remember, she thought as she turned off the music–and what if it’s not just because of the sleeping pills? The thought triggered a wave of anxiety, and she decided to try to recall exactly what she’d done before going to sleep. According to the clock it was Friday, which meant she’d been asleep for about fifty hours straight. She’d taken the Halcion late Wednesday morning, after an all-night job for which she’d received 150,000 yen. She hadn’t taken the money to the office yet, either, which explained why the manager was so insistent about her calling in.

Piercing places you in the point-of-view of both the killer and his intended victim. In concise language, it describes the confrontation between them. It’s a gripping novel, chilling to read, but also honest and realistic. Such people exist. Let’s hope we meet them only in the pages of Piercing.