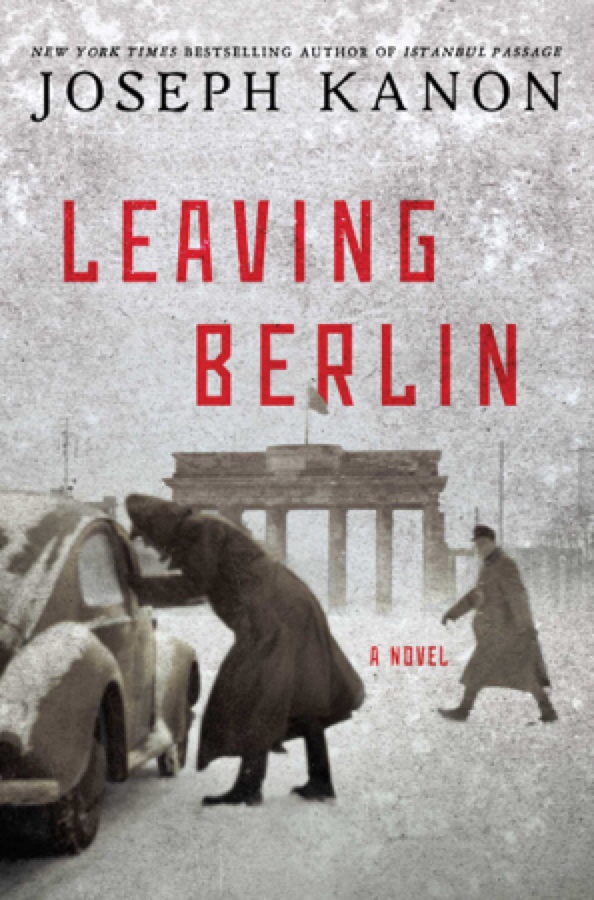 The Nook, Barnes and Noble e-reader, lacks the same cachet as Amazon’s Kindle, but it has at least one noteworthy feature that makes it the right reader in a specific situation. That situation is when you’re visiting a Barnes and Noble store. While at the store, you can connect to their WiFi and read any book free of charge for one hour. The Barnes and Noble near my home has a Starbucks coffee shop inside it. One day, having time to kill, I went into the store, purchased an ice tea, and set down to read. I decided to take advantage of the free hour. Wanting a spy novel, I browsed the possibilities, until I decided on Joseph Kanon’s Leaving Berlin. From the synopsis, it sounded like an old-fashioned, Cold War spy thriller, complete with trench coats, wide-brim fedoras, and bad guys hiding in the shadows. I didn’t need the full hour to decide to buy the novel. I loved the opening passage, that described the Berlin Airlift in such a poetic way that NOT BUYING the book became unthinkable.

Leaving Berlin (2014) tells the story of Alex Meier, a German Jew who had fled to the United States prior to the Nazi round-up. As a writer, he had made a name for himself, both in Germany and the United States, and as an exile, he created a cherish life for himself in America. But after the war, the House Un-American Activities Committees summoned him. He refused to give up names of other writers he knew to be Communist or Communist Sympathizers. As a result, the government revoked his right to remain in the country. He had to return to Germany. But the CIA saw this as an opportunity to recruit him as a spy. With the promised return to the States after his tour as an agent, he headed to Berlin to gather what information he could. They wanted him to spy on Irene, an old girlfriend who was now the mistress of a powerful Russian general. Through that contact, they hoped to gain access to Russian secrets. If the mission went according the plan, Leaving Berlin would’ve been a boring novel, but the plan fell apart the first day, and Alex found himself struggling to survive the power plays between two superpowers who saw him as expendable.

I wanted a spine-tingling spy novel, but Leaving Berlin reads less like a spy novel and more like a historical novel with a spy as its protagonist. Its biggest strength is local color. Kanon does an excellent job at creating post-war Berlin, a city destroyed by war and divided by its conquerors. He describes gutted houses, rumble-lined streets, and the constant buzz of the Airlift planes. But he doesn’t limit his descriptions to the physical environment. He also describes the social and political cloud that existed at the time. With the city divided in American, British, and Russian sections, what remained for the Germans?

The answer to that question fell to the Kulturbund that sponsored Alex repatriation. Represented by a man named Martin, the Kulturbund saw Alex’s return, and the return of other writers, playwrights, architects, and artists, as an opportunity to re-invent German society. It needed to be a society with the dichotomous challenge of being uniquely German without offending or threading the Russian overlords. To reintroduce Alex to German society, the Kulturbund hosted a party in his honor, and this event led to the weakest element in the novel–the number of characters!

One challenges writers have is introducing the cast of characters in their work. The general wisdom is that you need to space out these introduction to give readers an opportunity to absorb each one, but Kanon failed to do this. He used the cocktail party as a device for introducing several characters–both major and minor–and since he gave equally weight to the descriptions of all of them, this passage grew wearisome and confusing. Though I pride myself on being a focused reader, I lost focus several times during the cocktail party. Several times I had to stop and ask myself: Who’s this person again? What relationship does he have with Alex? Why is he important? Since many of these characters played a minor role, or even no role, in the events of the novel, I feel this scene could’ve and should’ve been more condensed.

Because of the cocktail party, I think of the middle of the book as slow and confusing, but that is unfair. Once we past that scene, once we return to the plot, and once the roles of the major characters become better defined and advanced, the pace quickened and the drama became more tense and dramatic. The cornerstone of fiction is conflict. Leaving Berlin is loaded with it. You know those baked potatoes that are flavored not only with butter and sour cream but also with bacon bits, chives, and cedar cheese? Leaving Berlin is so loaded. There is the political conflict between the East and the West, the beginning of the Cold War, and there’s the conflict of Germany seeking its own identity in the wake of its ruin. And then there’s the conflict between Irene’s many lovers–past, present, and maybe future. There’s violent conflict, balanced with dramatic conflict, and conflict in the subtext. And then there’s the conflict Alex faces as he navigates through the labyrinth of traps that surrounds him.

Leaving Berlin strikes me of the type of novel that not only inspires a second reading but also demands it. There’s so much here that you know you didn’t get it all with the first reading. It’s a short novel, only 264 pages on my Nook, but its packed to capacity. Kanon had trouble transitioning into and out of backstory passages, and as I mentioned earlier, he had trouble pacing character introductions, but once the backstory was established and we met all the characters, the novel read like the page-turning I wanted.

Along with Leaving Berlin, Joseph Kanon had written several spy novels, including Los Alamos (1997), The Good German (2001), and Istanbul Passage (2012). Born in 1946, he made a career as a book publisher, before he decided to become a writer in 1995. Leaving Berlin is the first novel of his I read, but I know it will not be my last. And as I said above, I intend to read this novel a second time. If you enjoy Cold War spy thrillers, I suspect you’ll enjoy reading Leaving Berlin.