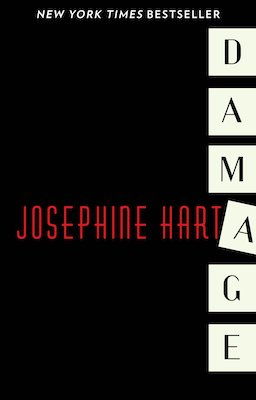 Earlier this year, to fulfill a goal to up my reading game, I devise what will no doubt go down as one of the greatest literary plans in history. I will read twenty novellas or short novels before April 30th. Since I developed this plan ten weeks from that date, it meant reading two novellas a week. Though the plan was sound, it failed to account for a couple unexpected family medical emergencies, including my second heart attack. Since I’m now in recovery from that heart attack, I’m returning to this plan to salvage what I can from it. I’m still reading the novellas–though I probably won’t achieve twenty of them before April 30–but it’s time to share with you my opinion about what I’ve read in this survey. In fact, I began this last month, with my review of Woman at Point Zero. And now onto my second novella–Damage by Josephine Hart.

Published in 1991, Damage was the source of the 1992 film of the same title, starring Jeromy Irons and Juliette Binoche. When I saw the movie on video tape–circa 1995–it inspired me to read the novel. This is one occasion where I had seen the movie prior to reading the novel. As returning readers know, I prefer the other way around, but often, as in this case, I learn about the novel from watching its movie adaptation. I enjoyed both, but as usual, I felt the novel was better than the film. Since Damage comes in at under 200 pages, it was the perfect length for this survey. I was excited to read it again, and now that I have read it the second time, I’m glad I added it to my project.

Josephine Hart (1942-2011) was born in Ireland. During the 1960s, she moved to London, where became a theater producer and she founded the West Side Poetry Hour. She wanted to bring her love of poetry to the general population. She married Maurice Saatchi, a member of the House of Lords and the founder of two advertising firms. This marriage made her Lady Saatchi. After friends encouraged her to write, she wrote Damage. It’s her first of six novels that included Sin and Oblivion. In 2008, she also edited Catching Life by the Throat: Poems from Eight Great Poets. Her final novel, The Truth About Love was published in 2009. She died of cancer in 2011.

They say that childhood forms us, that those early influences are the key to everything. Is the peace of the soul so easily won? Simply the inevitable result of a happy childhood. What makes childhood happy? Parental harmony? Good health? Security? Might not a happy childhood be the worst possible preparation for life?

Damage tells about the affair between a Member of Parliament (MP) and his son’s girlfriend, Anna. It’s a first person narration, in the point-of-view of the MP, who never tells us his name. Despite that, he gives us a good idea of what type of person he is–a successful doctor and politician, a member of British society, a man of good judgement and moral reputation–in short, the opposite type of man who’s supposed to engage in such foolishness. Yet once he met Anna, a relationship with her was all he valued, and since she, for her own reason, not only accepted his advances but also encouraged them, that relationship happened. Horrible consequences, as you can image, ensued.

The best element in this story is the character arcs for both the unnamed narrator and Anna. Particularly his. There’s a theory or formula in fiction that I have mentioned before: Give a man everything he wants to show he has nothing! It’s the narrative strategy between such novels as The Great Gatsby by F. Scott Fitzgerald and Bright Lights, Big City by Jay McInerney. Whether these writers thought about the formula in the simple way I have phrased it is not known, but I believe they knew they were writing about the fall of man. Hart also wrote about the fall of man. She gave him everything he wants only to show us that he has nothing. His fall is an emotional event that passes through several psychological phases–from rational to guilt.

Guilt is the theme I pulled from Damage. In the novel, guilt is both a psychological condition and a moral judgement. Guilt motivates Anna. Though it doesn’t justify her participation in the affair, it explains it. She’s emotionally and morally damaged–hence the title–and she thinks that gives her permission to break rules. Since it’s told in the first person from the father’s POV, we know her inner world only by what she tells him, and we have to wonder how truthful she was with him. First person narration, by nature, involves an unreliable narrator. In Damage, what makes the MP unreliable is that he has to trust what Anna tells him, even though we can’t be sure she told him the whole truth. In the end, trusting her cost him. What guilt she had felt she transferred to him. He alone must face the consequences of their affair.

Though it may arrive with shocking suddenness, horror devours its prey slowly. Through hours of days and years, it spreads its sullen darkness into every corner of the being it has conquered. As hope drains like blood from a fatal wound, a heavy weakness descends. The victim slips into the underworld where he must search for new paths in what he now knows will be a permanent darkness. Horror claimed me.

Novels tend to be expansive. Even scene inspires follow-up scenes; even conflict requires its own backstory; every setting requires a description. I love this about long novels, the way they worm through the plot and character and setting. But novellas can’t afford this. They lack the pages for subplots and complex backstories. Writers of novellas have to masters of selection. What stays? What gets cut? Hart did a great job in this selection. One of Damage best strengths is its succinct style that still feels fully descriptive.

The other advantage of novellas is that they are quick reads. Almost everyone I know–including myself–believe they do not read enough. Modern technology–I’m looking at you Internet and streaming movies and computer games–is wonderful for allowing us to achieve what we want, but it can also be distracting. There’s something wonderful about turning everything off and opening a book. If you fear you don’t have the time or the attention span for Moby Dick or War and Peace, then maybe Damage is the right fit for your schedule. It’s a perfect book to read poolside or over a relaxing weekend. I believe you will enjoy it.