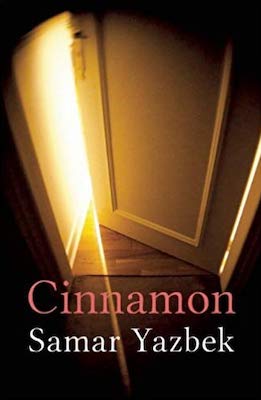 “Poetry,” one of my literature professors had said long ago in class, “is about mixed emotions.”

She was talking about Theodore Roethke’s “My Papa’s Waltz,” a short poem loaded with both positive and negative imagery and invoking both happy and frightening emotions. But she could’ve been talking about any great poem, and not just poems but also novels and short stories. Indeed, the line should’ve been: Literature is about mixed feelings. As I read Samar Yazbek’s Cinnamon, I found myself remembering that lesson. This short novel–only 124 pages–like “My Papa’s Waltz,” is loaded with both beautiful and frightening imagery, and it invokes strong, dichotomous emotions.

One night in her luxurious villa, Hanan al-Hashimi found her husband in bed with their maid, Aliyah. Angry, feeling betrayed, she kicked the girl out. The rest of the novel follows Hanan and Aliyah, as they suffered the thoughts, emotions, and consequences of this rift that had developed between them. Hanan moped in her bedroom, as Aliyah began the long walk through the affluent neighborhood back to the slum where she grew up. That is the frame of the real story, which is the stories of these women’s lives and the relationship they shared.

From this load which weighed her down, it was the tattered photograph that Aliyah wanted to hold onto more than anything else. The photograph was the only material evidence she had to prove that she was not born from nothing, that once upon a time she had belonged to a family, even if she had stubbornly lived her life in her imagination.

This is a novel told in flashbacks. In her flashbacks, Hanan recalled how lost she had felt in her loveless and childless marriage, before Aliyah’s arrival in her service. In Aliyah flashbacks, she recalled how life had been in al-Raml, the slum where she grew up. She remembered life with her violent father and the sexual assaults she and her sister suffered from the neighborhood boys. It becomes clear that these two women needed each other, both emotionally and physically. Flashbacks are hard to control, and it’s always challenging writing a novel told in flashbacks, but Yazbek manages it beautifully.

Cinnamon is a novel about opposites. Reading it, I was aware of that motif running throughout its pages. It begins with Hanan looking in the mirror, and what is the image in the mirror but the opposite of its viewer? But there are more apparent opposites: Hanan’s wealth contrasted with Aliyah’s poverty; Hanan’s pale complexion and Aliyah’s black skin; the luxurious al-Hashimi villa compared to the crowded al-Raml slum. Emotions are often opposite in Cinnamon. I began this review with a vignette about mixed emotions. Both Hanan and Aliyah suffered them. These two women both loved and hated each other, and that seemed to be in equal measure.

I suppose a novel written by a woman about women is inherently a feminist novel. Feminism does run throughout Cinnamon, with its exploration of sexual assault, the societal role of women, and their abusive relationships with men, but it’s not the only theme in the novel. I was surprised by how erotic Cinnamon was. It’s a sensual novel, constantly reminding us of the physical environment where the story takes place. From the plush mansion to the crowded slums–the sights, sounds, touches, and smells of their world is fulling developed. Especially the scent of cinnamon. It’s in their tea and on their bedding. Cinnamon is a strange spice, helping us sweeten our food while giving it a bite. As such, it’s the perfect symbol for the dysfunctional relation Hanan and Aliyah shared and for the rift that ended it.

‘There’s something more beautiful, more sensitive about women, something that makes you shine. It’s different with men–you get all sorts. Some you want to shut in your room for days and screw to exhaustion, but then outside the bedroom they don’t mean a thing to you. Then there are the ones you dream about spending your whole life just talking and flirting with; here the pleasure is in staying just within the limits. There are the men who make you want to cry in their arms, and others you sit with and discuss the ways of the world, inside-out. But with women, love is different. When passion takes hold of you and you’re completely absorbed in your lover’s kiss, she is all of those men in one: a lover, a friend and an everlasting object of desire…’

Samar Yazbek was born in 1970, in Jableh, Syria. She studied literature at Tishreen University in Latakia. (Wikipedia called it Latakia University, but my research suggested it was renamed Tishreen before her attendance.) Her first writings were collections of short stories: Automn Flowers (1999) and Words of Women (2000). Cinnamon, published in 2008, became her first novel translated into English (2013). Other novels include Clay (2002), In Her Mirrors (2010), and The Blue Pen (2017).

When the Syrian Civil War erupted in 2011, she became a critic of Assad. She fled Syria and now lives in Paris. Much of her writing these days deal with the war and its effect on the Syrian people. She wrote A Woman in the Crossfires in 2012 and The Crossing: My Journey to the Shattered Heart of Syria in 2014. Crossfires won her the PEN Pinter International Writer of Courage Prize. She used the money to found Women NOW for Development, an organization to help women in Syria.

Written before the war, Cinnamon is not a political novel. There’s social commentary in it, especially in the contrast between the rich and the poor, but its main focus is on the relationship between Hanan and Aliyah. It’s a short, beautiful, sensual novel, loaded with mixed emotions.