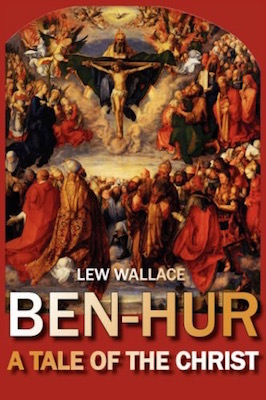 Chances are, if you live on Earth, particularly in the United States, when I say Ben-Hur, you think Charlton Heston. He starred in the 1959 movie that might’ve been the favorite of your grandmother. It might even had been a favorite of your parents. Perchance even you consider it a favorite Classic. Since the novel’s publication in 1880, Ben-Hur had been adapted to film five times, with a sixth adaptation due to hit the theaters this month. The first adaptation was in 1907, and it was only fifteen minutes long. It dealt with only one aspect of the book–the chariot race. Heston’s movie is the most famous and popular, but he also gave voice to the animated version released in 2003. In 2010, ABC offered us a miniseries, starring Joseph Morgan as the title character. Jack Huston stars in the current remake. Chances are, at some point in your life, you had seen one of these movies. But have you ever read the novel?

Until this month, I haven’t. That might not be a faux pas in your world, but in my mind, it represents a great neglect. I always want to read the novel before seeing the movie. In this day-and-age, with Hollywood adapting novels before I ever hear of them, much less read them, its impossible to always obey that rule. But for a story that’s been important to American popular culture since 1880, it’s shocking that I’ve never read the novel. I decided I wanted to read it prior to seeing the remake, so I bought the Kindle version and read it. Should you follow this lead? Or is knowing the story from the movies good enough?

Lew Wallace (April 10, 1827-February 15, 1905) was one of those multi-talented individuals who enjoyed several careers in his life. The first was as a military man, where he served in the U.S. Army in both the Mexican-American War and the Civil War. Trained as a lawyer, he sat in judgement of the conspirators behind Lincoln’s assassination. Later he served as governor of the New Mexico Territory and as the U.S. ambassador to the Ottoman Empire. Though he wrote throughout his life, as a break from studying law, it was after retiring from government that he dedicated his life to it. His first novel, The Fair God, concerned Cortez’s conquest of Mexico. But it was his second novel, Ben-Hur: A Tale of Christ, that made him a famous and wealthy writer.

Judah Ben-Hur, a wealthy Jewish prince, lives in Jerusalem with his mother and his younger sister. One day as he watched the arrival of the new perfect of Judaea, Valerius Gratus, from his roof terrace, Ben-Hur leaned on a ceiling tile that broke free and landed on Gratus’ head. Though an accident, this incited a riot. And the Romans viewed it as an assassination attempt. Led by Ben-Hur’s childhood friend, Messala, the Romans arrested him and his family. Without the benefit of a trail, they condemned him to slavery as a rower on a war ship. What fate did his mother and sister face? Ben-Hur’s goal is to overcome this injustice, revenge it, and restore his family to grace. We follow him on the path to this redemption.

As Wallace’s subtitle–A Tale of Christ–suggests, this is a Christian novel. The life and tribulations of Jesus Christ play an important role in this novel. It begins with birth of Jesus, King of the Jews, and ends with the crucification. Though Jesus is never a major character, he appears several times in the novel, and he plays an instrumental role in restoring Ben-Hur with his mother and sister. This was a literal deus ex machina, and as such a weakness in the novel. But I suppose that was a relevant scene in a novel that takes as a theme that Jesus Christ was the son of God and the savior of man. Since Wallace believed in a historical Jesus, he intended the novel to be a historical novel, and in respect to that, I will judge it as such.

As a historical novel, it is interesting, but it suffers structural problems. Too often the novel fell into Platonic dialogues about the nature of Jesus, the king who will be. Will his kingdom be a secular kingdom, like that of Herod’s, or will it be a Kingdom of Heaven? Balthasar, one of the Three Wisemen and a major character in this novel, argues for the latter, but Sheik Ilderim, Ben-Hur’s ally and benefactor, believes Jesus will create a secular kingdom that will liberate the land from Roman rule. Ben-Hur struggles with that question to the last chapter. In another major problem with the narration, Messala, though the novel’s antagonist, disappears after the chariot race. For the last half of the novel, he’s a nonentity. He’s mentioned a couple times by other characters, but he never appears again.

The strength of Ben-Hur is not in plot nor characters. It is in descriptions. Wallace never visited the Holy Land prior to writing this novel, so he invested hours of research in the Library of Congress. Because of that, I suspect his descriptions lacked accuracy, but they sound true. They pulled me into the story, allowing me to see places like Antioch, Jerusalem, the Grove of Daphne, and the Garden of Gethsemane. In believing in the setting, I found myself believing in Ben-Hur and Messala, in Balthasar and Ilderim, and in Iras and Esther (the two women who rival for Ben-Hur’s affection).

In his own description of writing Ben-Hur, Wallace claimed to not to be moved by religious convictions when beginning the novel. He felt intrigued by the story of the Three Wisemen. But as he performed more research for the novel, and wrote more, he found his faith. I think his writing reviews this dynamic. The first half of the novel is a historical adventure, filled with sea battles and chariot races. The second half focuses on the coming of the Christ. As such, even Ben-Hur seems to become a secondary character in the novel that bears his name. The biggest weakness of the novel is that Ben-Hur, the protagonist, the hero, doesn’t achieve his own goal. Jesus achieves it for him. That is a Christian message, but it doesn’t make for compelling fiction.

As this review is mixed, so is my recommendation. If you crave a historical novel about the Roman empire, there are far better novels than this one to choose from. I recommend Colleen McCullough’s Roman novels like The First Man in Rome. If you carve a Christian novel, you might find The Last Temptation of Christ by Nikos Kazantzakis a more interesting novel about Jesus’ life and tribulations. But there are entertaining scenes and beautiful descriptions in Ben-Hur: A Tale of Christ, and for that reason, it’s worth a look.

1 comment on “Book Review: Ben-Hur: A Tale of Christ”