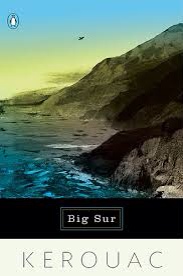 Jack Duluoz, Jack Kerouac's fictional alter-ego in Big Sur, felt the need to get away from it all for a few weeks of solitude. A successful writer, whose book The Road had inspired the Beaknik movement, Jack found himself hounded by fans who both misunderstand his writing and envision him to be the persona of his novel's narrator. He arranged with his friend and fellow writer, Lorenzo Monsanto, to stay at Monsanto's cabin in Big Sur for six weeks. What was meant to be a soul-searching getaway melted away into an acholol-and-drug-fueled binge, filled with social conflict, sexual complications, and personal misery.

Jack Kerouac (March 12, 1922-October 21, 1969) was one of the founding members of the Beat Generation. In the purest definition, the Beat Generation is Kerouac, Allen Ginsberg, William S. Burroughs, Neal Cassady, and Herbert Huncle, but in a looser definition, it includes other writers, like the poet Lawerence Ferlinghetti. Ferlinghetti is in this novel; he's Monsanto. Ginsberg and Cassady are also in this novel, as Irin Garden and Cody Pomeray, respectively. Kerouac wrote about his life. He wrote so closely about his life that those fans who personified him as his narrators were not so wrong to do so.

Where does autobiography end and fiction begin? How much of this novel was based on real events and how much of it was created for dramatic effect and to intensify conflict? Kerouac makes it easy to assume that “only the names have been changed,” that the events in the story happened, more or less, as he described them. Since Jack had spent most of the novel drunk or high or a combination of the two, how much can we trust his memory?

Literary scholars talk about “unreliable narrators,” which is any narrator telling his own story. People lie, they conceal, they forget vital details, and they never know the full story, the antagonist's point-of-view. The novelist creates an unreliable character anytime he writes a story in the first person. Jack, the first-person narrator of Big Sur, feels more unreliable than most. Though, since on one level the novel reads as a confessional, his narration feels candid and honest, we are always aware that he was drunk, stoned, and confused. He suffered from faulty memory, and even after allowing for that, we find ourself not quite believing what he does remember. We believe the gist, the essence, but some details feel false. He's confessing, but only to himself, and he's asking for forgiveness, but only self-forgiveness.

This is my prejudice for grammar, for clarity, but Big Sur isn't a novel about clarity. It is a novel about confusion. It is a novel about a guy who wanted to simplify his life for a few weeks, but when left alone, he realized he was not pleasant company. He returned to San Francisco to spend time with his friends and to find a lover, and en masse, they return to Big Sur, to the cabin beneath the bridge, to party, to make love, to simplify life. What is it they hope to achieve?

There seems to be a rekindled interest in the Beat Generation in America now. Two of Kerouac's novels, On the Road and Big Sur, had been filmed in the last two years, and Kill Your Darlings, starring Daniel Radcliffe as Allen Ginsberg, concerns the young Beats and their connection to the murder of David Krammerer. What is it about the Beat Generation, writing in the 1950s and 60s, that make their writing speak to us in the 2010s? What is it about our time that relates us back to theirs? I don't have the answers, but in seeking them, I find myself turning to Jack Kerouac and his novels.

Understanding The American Novel, a major theme in this blog, means reading the signature novels of every era and every literary movement. For the Beat Generation, most critics believe Kerouac's On the Road is the must-read novel, but I suspect the true essence of the Beat Generation lies in some of his lesser known and read works like Big Sur. It is an older, more self-aware, and less certain Jack Kerouac we meet in its pages. If On the Road was the Beat Generations manifesto, then Big Sur is a list of its regrets. I would recommend it to anyone interested in the Beat Generation, but I don't believe it is a novel suited for the casual reader.