As I Lay Dying by William Faulkner

Home / Classic Literature • The American Novel / As I Lay Dying by William Faul ... 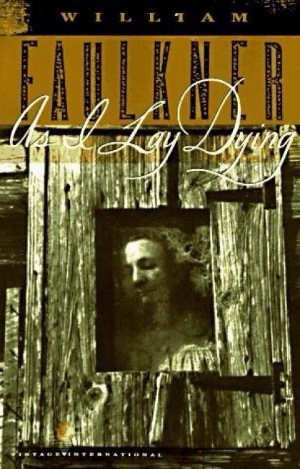 After her death, her family—her husband, four sons, and one daughter—must transport her body forty miles to Jefferson to bury her. In this day of high-speed automobiles and paved highways, this tragic but mundane duty sounds easy and quick. It could be done in an hour. But As I Lay Dying is set in a time when horse and wagon dominated travel, when the roads, where they existed, were dirt tracks, and when bridges were made from rotting wood. And the family, Anse Bundren and children, are further handicapped by heavy rains, local prejudice, and their own self-defeating nature. William Faulkner named them Bundren, but it is easy to imagine he toyed with naming them Burden—they’re a burden onto themselves.

William Faulkner (1897-1962) is one of the great novelists of the 20th Century. In the study of literature, there are few undebatable statements, but that is one of them. Who would argue? Not the Nobel Commission, who granted him the Nobel Prize in 1949, and not the organizers of the PEN-Faulkner Award, who considered him so important they named their prize after him. Even readers who disliked his work grant him the prestige of being one of the great writers of his time. Known for his experimental, stream-of-consciousness prose, Faulkner wrote about a South that had lost the Civil War, a South impoverished by that defeat, a South robbed by Carpetbaggers, greedy businessmen, and corrupt politicians. With a few exceptions, his novels are not easy to read. I usually tell readers new to Faulkner: “Reading him is work, but like any job well done, there is a payoff.”

As I Lay Dying, for a Faulkner novel, is fairly easy to read. The prose is accessible, the chapters are short, and the plot is simple. The Bundrens are on a simple quest to bury their matriarch, Addie Bundren. The cause of her death is never mentioned—not even by Peabody, the doctor—but in reading these pages, one suspects she died in order to quit the family. Stubborn and selfish were Bundren family traits. To them her death is less a tragedy and more an opportunity to travel to Jefferson, where each have their own selfish agenda. These unsympathetic characters somehow inspire sympathy, not just from the readers—who follow this journey from farm to town, through fire and flood—but also from those they meet en route—farmers, doctors, and clergymen who resent the very aid they give the Bundrens, but still feel the need to protect the Bundrens from their own stubborn stupidity.

Narrated from fifteen points of view, As I Lay Dying is an experimental novel. Some of the narrators are members of the family, while others are outside the family. Each narrator conveys the part of the story that he or she knows and has witnessed. Imagine a dramatic event, like a bank robbery, and afterwards, the news reporter interviewing the various witnesses. Each witness will tell the story in his own voice, and since no witness saw everything, each will have different information to add. It is the job of the reporter to weave these statements together to forge a coherent story. Such is the construction of As I Lay Dying. The success of this novel lies in the way these voices collaborate to tell us about this mythic journey.

Mythic, I say, because I have a theory about American literature, and more specifically, American fiction, and what distinguishes it from literature from other nations. As writers in other countries draw from the mythology of their land, the American writer must seek, even create, American mythology. In this task, perhaps Native American writers, like James Welch or Louise Erdrich, have a head start, since they can draw from their tribal traditions. But what of those of us who came later? Europeans, Africans, Asians, Pacific Islanders, Hispanics, and others—what mythology unites us? Ties us to this land? One job of American literature is to create this mythology. Of course, not every novel succeeds at this, or even tries to, but it is hard to read As I Lay Dying without suspecting that Faulkner was consciously creating an American legend. Is the struggle of the Bundrens to bury their matriarch much different than Jason’s voyage to find the Golden Fleece or Gilgamesh’s visit to the underworld?

Since the multiple point-of-view makes this novel a favorite of literature professors, I had to read As I Lay Dying twice in college. This was my third reading, my first since finishing college a decade ago. I believe the absence of course work always makes a book more entertaining. Without the stress of needing to write an essay or take a test or discuss the book in class removed, I was better able to enjoy the story. It is a fascinating tale that I recommend.