A Clash of Kings by George R. R. Martin

Home / A Clash of Kings by George R. R. Martin 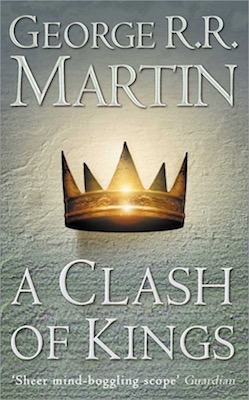 There’s trouble in Westeros. Following King Robert Baratheon’s death, his son Joffrey Baratheon takes the throne. But when a rumor surfaces that casts doubts of Joffrey’s legitimacy, his uncles, Renly and Stannis, each claim the throne and prepare for war. Meantime, Robb Stark fights a war of independence for the North, while his half brother and the Night’s Watch march above the wall in search of a rogue king named Mance Rayder. Lord Balon Greyjoy of the Iron Islands proclaims himself a king and plots his own war of conquest. Across the Narrow Sea, Daenerys Targaryen searches for her path. Though forgotten by the turmoil in Westeros, she has not forgotten about the kingdom she believes is her birthright to rule.

Published in 1998, A Clash of Kings is the second novel of George R. R. Martin’s Song of Ice and Fire series. It picks up where A Game of Thrones left off. Since it has nine point-of-view characters, each with his or her own main plot, and several subplots, it is a long, complicated novel. But it is an entertaining and compelling read that tells the story of what happens when a land falls into factional civil war. It furthers Martin’s theme about power, how it’s obtained and used and misused. It also explores the theme of war and its consequences for the country and for the individuals who live in it.

After her father’s execution, Arya Stark becomes a refugee. Knowing that Joffrey and his men want to capture her, perhaps kill her, she must keep her identity a secret. Her older sister, Sansa, remains a hostage in Joffrey’s court; she remains his fiancée, though she had fallen out of love with him. She must plot her survival and escape. Along with his brothers of the Night’s Watch, Jon Snow marches north in search of Rayder and to discover what intentions he has. They fear it’s war. Following the birth of her dragons, Daenerys Targaryen becomes the Khaleesi of her own tribe, but uncertain of what that means, she leads them on a long quest of self-discovery. Those are only three of the major plots that Martin weaves together to create a narrative tapestry that is beautiful, rich, and textured.

With so many characters given equal attention, with so many plots and story goals, it’s not easy to determine who is the main protagonist and which plot is the main plot. I answered these questions in a backwards way, by asking myself what was the novel’s climax. That was the Battle of Blackwater Bay where Stannis tried to capture the capital and throne from Joffrey who held it. That makes the war against Stannis the main plot, and Tyrion Lannister, the acting hand of the king, who must arrange the defenses of the city, the main protagonist.

The dwarf son of Lord Tywin, and uncle to the king, Tyrion is one of the most intriguing characters in a novel that presented us with many intriguing characters. In The Game of Thrones, his character arc involved winning his father’s respect. Born a dwarf, that respect was hard to come by, but once he achieved it, Lord Tywin Lannister sent him to King’s Landing to act as the Hand of the King in his absence. Tyrion is a classic antihero, a rogue who likes his wine and his women, who practices deceit and enjoys palace intrigues. But he is loyal to his family, his friends, and his current mistress, Shae. He also has a keen sense of responsibility and a strong intellect. Though he plans on fighting this war with that intellect, during the Battle of Blackwater Bay, he realized he must don armor, raise sword, and face his enemies.

In his Song of Ice and Fire series, George R. R. Martin created an ambitious project, as he tells the fictional history of Westeros and the people it contains. So far there are five novels, with a sixth one expected soon, and a seventh planned. As I’m sure you know, these are the literary sources of the HBO series Game of Thrones, which has finished its sixth season. Though the genre is fantasy, the series is grounded in real-world political realities, which allows us to read it also as historical fiction. The historical War of the Roses acts as an inspiration for the Song of Ice and Fire series.

Like the other novels of the series, A Clash of Kings is a long novel, complex in plot, themes, and characters, but it’s well-paced and entertaining. I enjoyed reading it, but it took me three months, because it was my “bus book.” As the term suggested, it’s the book I read on the bus and during other empty times. Though that reading strategy risks losing the thread of the story, the way Martin broke up the chapters and interwove the various point-of-view characters prevented that from happening. A Clash of Kings requires commitment from its readers, but it rewards that commitment with a fascinating tale filled with sympathetic characters.