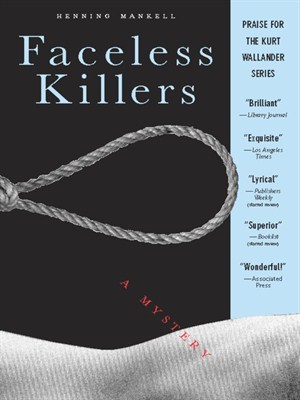 Early one winter morning, an elderly farmer woke up to an eerie silence. Though he had no idea what woke him, looking through the window, he realized there was something amiss at his neighbor’s house. At his wife’s insistence, he donned his clothing and went to investigate. When he looked through his neighbor’s window, the gruesome sight he saw sent him running back to his own farm to call the police. The neighbor, Johannes Lövgren, was dead, and his wife, Maria, was dying. Kurt Wallander, the acting chief of the Ystad Police, answered the call. As he entered the Lövgren’s bedroom, the viciousness of the attack struck him cold. Maria, still living, was tied to a chair with a noose around her throat. Her dying words gave the only clue to the identity of the murderers: “Foreigners.”

Henning Mankell (1948-2015) was a Swedish writer who specialized in crime novels. Faceless Killers is the first of eleven novels featuring his most famouse character, Kurt Wallander, a detective in the Ystad Police Department. I first learned of Wallander when I watched a series based on him on Netflix, starring Kenneth Branagh. I watched four or five episodes, before I realized the character was based on detective novels. I stopped watching the show and picked up Faceless Killers. As always to my nature, I prefer to read books before viewing film and television adaptations, and I prefer to read them in the order they appeared in print. First published in Sweden in 1991, Faceless Killers was translated into English by Steven T. Murray in 1997.

One of the charms of this book was its setting in Sweden, especially in the southern region of Skåne. As described by Mankell, this is a rural land, cold, windy, and lonely. Dotted with small towns and peopled by farmers, artists, and shop owners, Skåne seems an unlikely setting for a bloody double murder. But it is a theme of the novel that society is transforming in a way that brings big city crime to small communities. Wallander spent a lot of time on country roads, driving from Ystad, where he lived, to Malmö and Kristianstad, to Lund to Trelleborg. Often while reading this novel, I set down the book and opened up my map app. I followed his route around Skåne. I opened up my browser and found images of Ystad and the surrounding land. I love it when novels introduce me to new places and incite my curiosity about them. It’s one of the reasons I read. Though the place was new and strange, the people were familiar. I know the men and woman Wallander met in his investigation–the hairdresser and the mechanic, the ex-wife and the estranged daughter, the tired detective and the aging farmer.

In some ways, Faceless Killers is three novels wrapped into one. On its most basic level, it is a detective novel. It is the story of Wallander’s investigation into the Lövgren murders. It follows the twist and turns of this investigation, down the paths of false leads and family secrets, through the side investigation into the murder of an African refugee, and finally–months later–to the arrest of the faceless killers. Like any detective novel, it has action–fist fights, gun battles, and car chases. Though it functions as a crime novel, and though the investigation provides the story with its plot, the investigation is not the driving force of the novel. It wasn’t what motivated me to keep the pages turning. It has a second, deeper level in the analysis of the type of man who becomes a homicide detective.

In truth, the character development of Kurt Wallander suffers clichés. Divorce? Check. Estranged from his father and his daughter? Check. Alcoholic? Check. Perhaps these things are clichés in fiction, because they are a realities in life. Perhaps police officers are more prone to divorce than the general population. Maybe the nature of the work makes one cold and withdrawn, which would leave to troubled relationships with everyone he knows, including his father and daughter. And perhaps alcohol helps to numb the shock of seeing corpses and to erases the memory of these gruesome sights. I have no doubt that this is true. But as someone who reads detective novels and watch detective movies, I grow weary that every detective has to suffer estrangement from those he most cares about. I grow weary of detectives who spend their off hours pouring booze down their throats.

Despite these clichés, I find Kurt Wallander interesting. Tolstoy tells us that all happy families are alike, but unhappy families are unhappy in their own unique ways. So can be said about the unhappy man. Mankell probes the psych of Kurt Wallander in a way that makes this a psychological novel. We follow Wallander through a whirlwind of emotions–doubt, anger, depression, lust, regret, and love. He doesn’t understand his father or his daughter, and he has little idea why his wife left him, but he loves them. He longs for better relationships with those he cares about, but he has no idea how to achieve those relationships. This makes him a very relatable character, one deserving our empathy and support. We see him as a better man than he believes himself to be.

Though he doubts his abilities, and though the solution of the Lövgren murders eludes him for months, he’s a good detective. He’s not a brilliant detective; he’s no Sherlock Holmes. He can’t look at a footprint in the mud and calculate the height and weight of the man who made it. That’s not his skill set. He’s persistent. He’s thorough. He cares about the victims and their family. Murder horrifies him, especially the murders of Johannes and Maria Lövgren. He’s determined never to allow a murderer to go free. He knows there’s a solution, and while others in the department treat the murders as a cold case, he continues to work it. That persistence leads him to the solution and to the dramatic conclusion.

But this novel is more than a crime novel; it is more than a novel about a man who solves murders. The third layer of this novel is about Sweden, a country in transition. The Lövgren murders symbolizes a type of crime Wallander believes would’ve never been committed even a few years earlier. There is a new viciousness in Sweden, a new brutality, and Wallander worries about this trend. Some blame it on Sweden’s policy to accept refugees. Xenophobia is a theme in this novel, and in its pages, characters express various attitudes, both positive and negative, about foreigners. Since Wallander himself doesn’t seem to have an opinion, he becomes a sounding board for these opinions. What makes this novel relevant is that these attitudes about foreigners, immigration, and refugees are timeless. Here in the United States, we see these same arguments mirrored in the speeches of our presidential politicians. They’re timeless because there are no easy solutions, no clear path. Not for Sweden of the 1990s or for the United States of 2015.

I read the Kindle version, currently selling at Amazon for $6.83. It is a good crime novel, set in a unique location. I fear it its pace might be too slow for many readers of crime fiction, but it is not devoid of action and suspense. I think it works better as a psychological novel than as a murder mystery. But in Kurt Wallander, it introduces a detective worth knowing. I know I will read other Wallander novels by Henning Mankell.