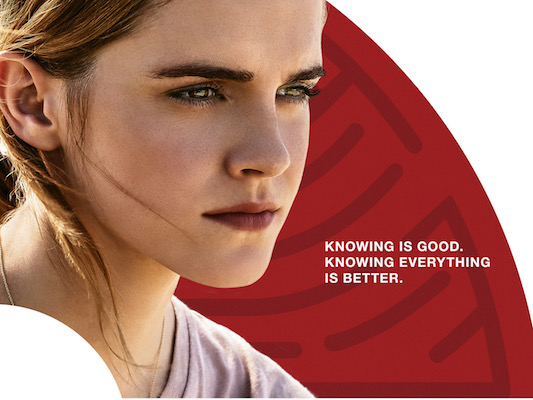 I have a saying: Good novels make bad movies; bad novels make good movies. There are exceptions in both cases, but the maxim holds true in too many cases to ignore. The Circle by Dave Eggers, which I review last October, is a bad novel. So following my maxim, it should make a good movie. I felt cautiously confident about that, because I felt the story would resonate better as a movie than as novel. When I saw that Tom Hanks, John Boyega, and Emma Watson would star in the film, my confidence grew. But the unsatisfactory novel left a sour taste in my mouth. Will the movie wash it away?

Directed by James Ponsoldt, The Circle does wash that sour taste from my mouth. It’s a statisfying movie, made so mostly by Watson’s performance as Mae Holland. It suffered, however, the same flawed plot as the novel. I blame Eggers and Ponsoldt, who collaborated on the screenplay. Though it deals with important themes about technology, privacy, surveillance, and social change, it deals with these themes in a weak way that felt contrived. As I expected, it played better in the movie than the book, but the conflict was truncated to fit the run time, so it forced us to make plot leaps. Since I had read the novel, those leaps were easy for me, but I wonder how someone unfamiliar with the story will fare with them. I was glad to see they didn’t use voiceovers. Anytime you have a literary adaptation that doesn’t begin with twenty minutes of voiceovers, it’s a win. A small win, but a win nonetheless. They altered the ending for the better. The movie ended the way I wanted the book to end. For that reason alone, the movie felt more satisfying.

There were several star-quality actors in The Circle. Bill Paxton, in his last role, played Mae’s father, who suffered from multiple sclerosis. Ellar Coltrane plays Mae’s ex-boyfriend and current technophobe, Mercer. Karen Gillan, who impressed me in Guardians of the Galaxy, plays Mae’s friend and coworker, Annie. As I did for Guardians, I will award her as best supporting actor for The Circle. As Eamon Bailey, Tom Hanks plays one of the three corporate founders. As Tom Stenton, Patton Oswald plays the second, and as Ty Lafitte, John Boyega plays the third. I praise all their performances, but with a disappointment that none of them had enough screen time. I wanted to see more from each of these characters, especially from Boyega’s Ty, because he was such an important character in the novel, but in the movie, he’s just exposition. I think Boyega is too good of an actor for a role that’s just exposition. 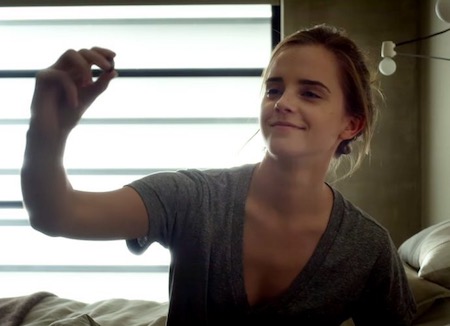 In the novel, Mae Holland is such a weak character that she pissed me off. Except in quotation, I don’t usually cuss in these reviews, but I will here. She pissed me off. We want our literary protagonists to be strong, intelligent, capable people. It’s okay for them to have their tragic flaws, in Mae’s case a strong desire to succeed at The Circle, but we still want them to be their own person rather than a tool of others. In the novel, Mae was a tool. She’s a tool in the movie, too, but Emma Watson made it work. I left the theater feeling satisfied, but as I reflected on the movie, I realize that what made it satisfying was Watson’s performance. Her Mae, though a yes-person to the corporation, had doubts about her new position and lifestyle and about the inherent invasion of privacy they demanded from her. With small movements of the eyes, uncertain smiles, and nervous gestures, Watson conveyed those doubts without giving voice to them. So I award her best actor in The Circle, not an easy win when your principle costar is Tom Hanks.

The main setting for The Circle is the corporate campus, shaped like a circle. They created it via CGI, but it looked fake. The filmmakers used that CGI image for the establishing shots. Though the interior shots of the campus looked convincing, the exterior shots failed to convince me they were in The Circle. I think they filmed it in a park. It’s a forgivable sin, but one I decided to mention because a strength of the novel was the enclosed world created by the corporation. They tried to create that for the movie but failed. Hollywood struggles for ways to incorporate emails, the internet, and social media into the story. Its current convention, employed in The Circle, is to overlay the shot with Twitter-like comments. Though keeping with the theme about the invasiveness of social media, I found this technique distracting, and I don’t believe it added to the story. 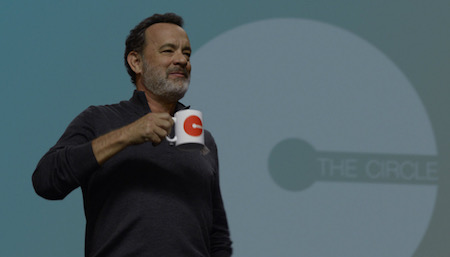 Thematically, The Circle, both the novel and its movie adaptation, strives to be a cautionary tale about technology, social media, and the lost of privacy. Though the movie succeeded at this better than the novel, both suffered from a plot that felt contrived. Neither felt like the right story for the theme. It’s close; it’s on the right track. But a few more rewrites where needed to bring it home.

The Circle is an entertaining movie; it’s worth seeing, especially if you like movies about technology. The filmmakers took a bad novel and turned it into a good movie, but The Circle has as much to criticize as it does to praise. Though it explores important themes, it does so with a weak plot and truncated characterizations. The performances, especially by Emma Watson, makes it worth seeing. But if, like me, you think of movies as theater movies or home-viewing movies, then The Circle is a home-viewing movie. In fact, it feels like a prefect movie for those stay-at-home moods when you want to do nothing but watch a movie.