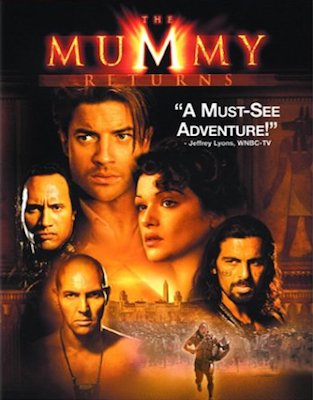 Please don’t misunderstand me or quote me out of context. I’m no fan of death. I want people to live long and satisfying lives. But once someone dies, he should stay dead. It seems a lot of trouble happens on the silver screen when the dead comes back to life. How much simpler it would be if everyone obeyed the simple rule: Once you’re dead, stay dead! You’d think that someone who disobeyed that rule once, and suffered another death for it, would’ve learned that lesson. But in The Mummy Returns, our old friend, Imhotep, returns for his third life—if you’ve been counting—and he brings his characteristic mayhem with him.

As with The Mummy (1999), Stephen Sommers wrote and directed The Mummy Returns (2001). This is a true sequel of The Mummy, by which I means the events of The Mummy Returns would not have happened if the events of The Mummy didn’t happen first. But a decade had passed. Rick O’Connell and Evie are now married, and they have a son, Alex. Following a vision Evie’s suffered, she and Rick returned to Egypt and discovered the Bracelet of Anubis. Meanwhile, at another dig site, excavators uncovered Imhotep, mummified again, this time in amber. The curator of the British Museum, Baltus Hafez, led this excavation, along with Meela Nais, the reincarnation, in body, of Anck-Su-Namun. Needing the Bracelet of Anubis to fulfill their plan, they followed the O’Connells to London, resurrected Imhotep, and broke into the O’Connell estate. That brought Rick and Evie back into the fight to destroy the mummy.

One of the charms of The Mummy is its simple plot, but The Mummy Returns has a much more complicated plot. It involves resurrecting another dead being, the Scorpion King, who commands the Army of Anubis. He who kills the Scorpion King will take control of the Army of Anubis and conquer the world. Imhotep, being the only character “bad-assed” enough to kill the Scorpion King, set out to do just that. The O’Connells chased him, because he had abducted Alex, who wore the Bracelet of Anubis that will lead them to the Oasis of Ahm Shere, where the Scorpion King is entombed. See what I mean about complexity? And it becomes more complex as Rick and Evie experience their own revelations. With this complexity, the filmmakers lost some of the charm in this sequel.

This is a weaker movie than The Mummy. Though Rick and Evie’s goal is easy to understand—rescue their son—the goals of the other characters are more obscure. Imhotep had never been about world domination. His goal in both of his previous lives had been to be with Anck-Su-Namun, whom he loves. In The Mummy he needed to resurrect her so they both would have flesh in order to partake of that whole flesh-partaking thing. So where does this world domination goal come from? It comes from Baltus and Meela, who initiated this plan. Meela, being the physical reincarnation of Anck-Su-Namun—soon to the become the spiritual reincarnation too—can hope to share the spoils of that conquest. But what motivated Baltus? Not clear. That has always bothered me about The Mummy Returns. Baltus Hafez is a supporting character in the film, but without him, the events of the film don’t happen, but it’s never clear to me why he does what he does. It wouldn’t have taken a lot to clarify his motivation—only a line or two of dialogue—but Sommers never wrote or filmed that dialogue. 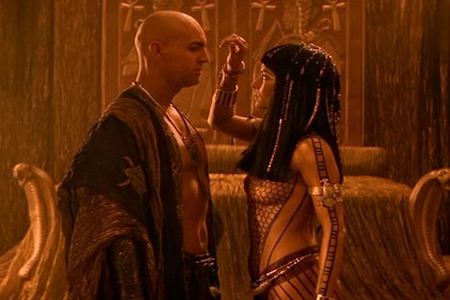 Arnold Vosloo as Imhotep and Patricia Velásquez as Anck-Su-Namun

The complexity of the plot and the lack of Baltus’ motivation are my two chief complaints about The Mummy Returns, which is, along with The Mummy, a guilty pleasure of mine. It’s not a great film, but it’s a film I enjoy watching often. As I said in my review of The Mummy (1999), since their release, I’ve had watched each movie at least once a year. I don’t think I liked either of them that much the first time I saw them, but they grew on me. I think that’s what I mean by guilty pleasure in this context. They are popcorn flicks, movies I watch just for the joy of watching movies.

When I was a kid, the Saturday matinee was the thing to do. At the beginning of summer, we bought ticket booklets that got us into the theater each Saturday. They showed two films, and between them, they showed cartoons and an episode of a serial. Over the course of the summer, the episodes added up into complete story. Though I remember the experience, I remember nothing about the movies I saw during these outings. They were adventure movies, monster movies, science-fiction movies—movies targeted towards an audience filled with children. The Mummy  and The Mummy Returns would’ve been at home at these matinees. Perhaps that is also what I mean by guilty pleasure. They take me back to childhood, to an age when watching a movie served the purpose of filling time over the summer vacation. To an age before I form critical judgement and the need to practice it. To an age when I felt no need to delve into character analysis or think about the themes. To an age before I felt the need to ask the simple question: Did I like it?

As an adult, I feel the need to ask that question. In answering it, it’s not enough to say yes or no; I feel the need to explain the answer. Even when the reason I like the movie is that it lets me set aside critical analysis. A paradox, I know, but not the most puzzling paradox in my life.

Brendan Fraser and Rachel Weisz reprise their roles as Rick and Evie. John Hannah returns as Evie’s brother, Jonathan, and Oded Fehr returns as Ardeth Bay, the leader as the Medjai. Arnold Vosloo is Imhotep, and Patricia Velásquez is Anck-Su-Namun. She enjoys an expanded role in this movie, because she also plays Meela. New characters in this sequel include Freddie Boath as Alex, Alun Armstrong as Baltus Hafez, and Dwayne Johnson as the Scorpion King. My award for best actor goes to Shaun Parkes as Izzy, a dirigible pilot Rick hires. Though Izzy serves mostly as comic relief, Parkes timing and delivery were perfect. 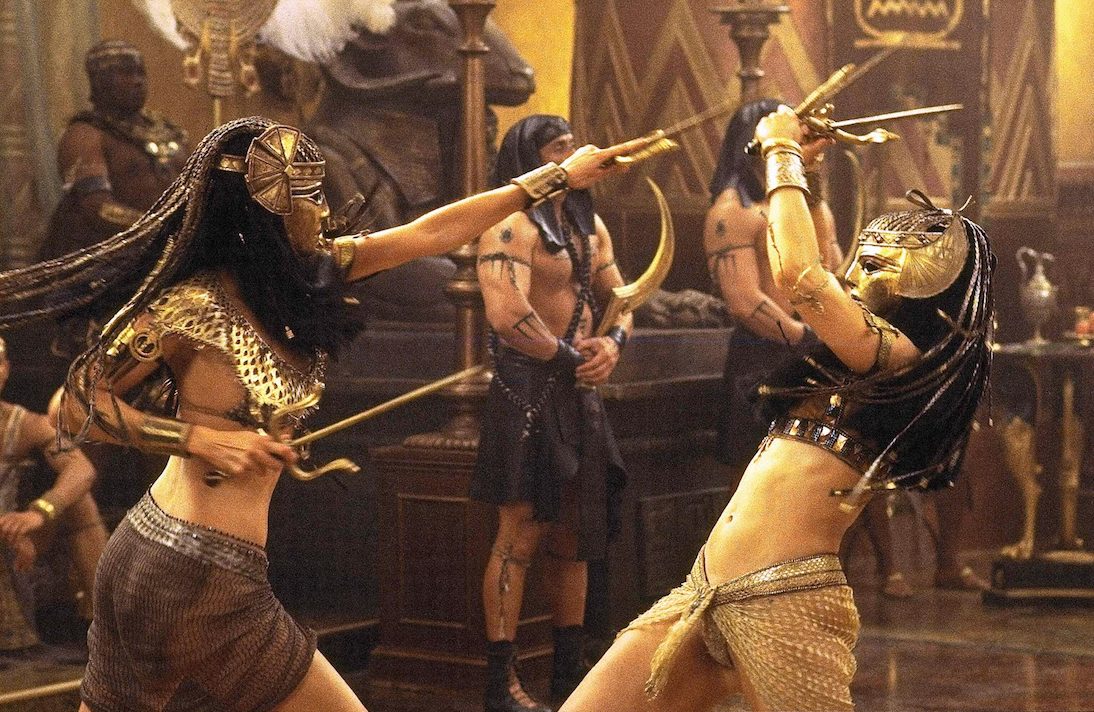