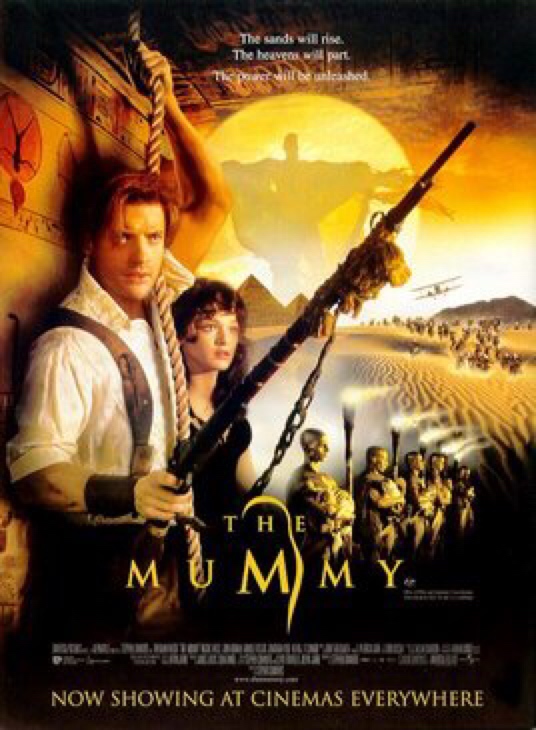 While reviewing the Tom Cruise movie The Mummy, I found myself making frequent comparisons to the 1999 movie staring Brendan Fraser and Rachel Weisz. Since I had never reviewed this movie in my blog, and since I find it superior to the 2017 remake, I thought I would correct this oversight. This week I’ll review The Mummy (1999); next week, The Mummy Returns (2001). I’ve seen two other movies of this same series–The Scorpion King (2002) and The Mummy: Tomb of the Dragon Emperor (2008)–but I’m going to skip reviewing those moves. I wasn’t impressed with either. (The Scorpion King enjoyed a couple sequels that I never saw, never even knew about until I preformed the research for this article.) The Mummy and The Mummy Returns are both guilty pleasures of mine. Since their release, I had watched both multiple times; in fact, I tend to watch them once or twice a year. I think of them as “mindless entertainment,” movies I can watch without worrying about subtext, themes, and other deeper elements. I’m not saying they don’t have subtext or themes; I’m saying that that’s not what these movies are about to me. They are pure entertainment. They are movies I watch when I want to switch my mind off.

The Mummy is a cinematic monster, created by Hollywood for Hollywood. Dracula and Frankenstein were classic novels, with decades of brand recognition, long before anyone thought to put them on film. Edgar Allan Poe wrote a short story, “Some Words with a Mummy,” and Sir Arthur Conan Doyle wrote “The Ring of Thoth.” In 1903, Bram Stoker, the writer of Dracula, published The Jewel of Seven Stars. These three gothic tales seem to be the vanguard of mummies as monsters. In 1922, archaeologist Howard Carter unearthed Tutankhamun’s tomb, and this discovery incited keen interest in Ancient Egypt and in the practice of mummification. That discovery, along with the success of the 1931 film adaptations of both Dracula and Frankenstein, inspired producer Carl Laemmie to produce an Egyptian-themed horror movie. He asked writer Richard Schayer to find a literary source to adopt, but they were unable to find a suitable source. Writer John L. Balderston merged elements of “The Ring of Troth” with another story, about a magician who obtained immortality with injections of nitrates, to write the screenplay for the 1932 movie staring Boris Karloff. In this movie, they created the Egyptian priest Imhotep and his desire to resurrect his long lost love, Ankh-es-en-Amon. I’m sure over the course of my life I’ve seen this movie–probably as a kid on some Saturday afternoon movie program–but I have no recollection of seeing it. So the 1999 movie starring Fraser and Weisz serves as my introduction to mummy horror. 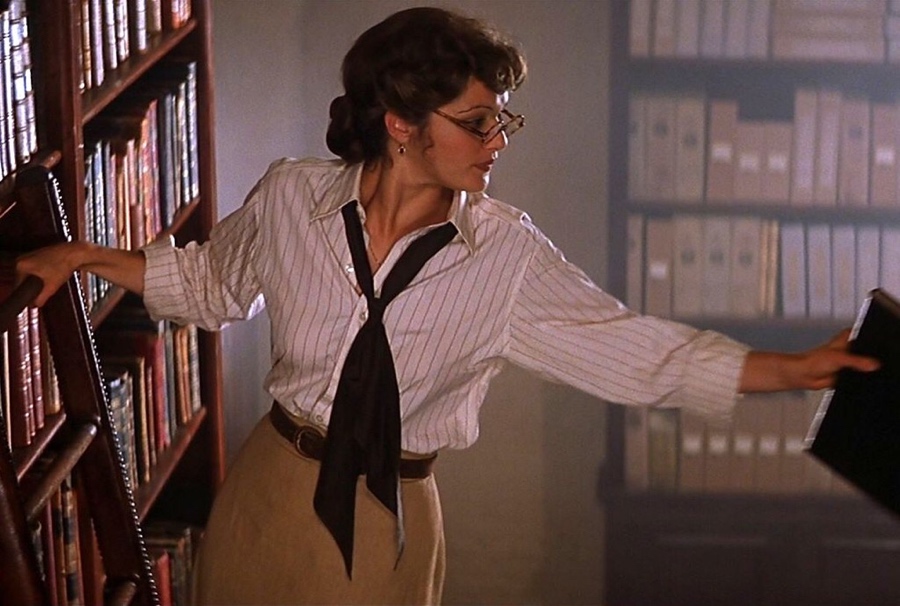 As I watched the Tom Cruise remake, as I wrote its review, I felt the desire to see the 1999 movie again. Before seeing the remake, I didn’t know that it was intended to be part of a shared cinematic universe, Dark Universe, but as I watched it, it became obvious that they were more concerned with building that cinematic universe than in telling the tale of Ahmenet’s resurrection. I think that’s among the reasons it failed. I don’t mind movies forming a shared cinematic universe–forming such connections seem to be a modern trend–but each movie of that shared universe needs to be its own entity. It needs to stand alone. It’s a concept Edgar Allan Poe called unity. A piece of art–like a motion picture–needs to contain every element needed for its completeness, and nothing but those elements. The Mummy (2017) achieves this more faithfully than some movies in Marvel Cimematic Universe does, but it suffered from a lack of unity. I’m looking forward to Dark Universe. I think that shared universe has potential to give us some very entertaining movies. But The Mummy (2017) was a false start because it wasn’t its own movie.

The Mummy (1999) was a stand alone movie. It’s not clear to me that the filmmakers knew they would have a sequel, much less inspire a franchise. They focused on the story contained within this movie and gave us a good one, one that satisfies Poe’s test of unity. Written and directed by Stephen Sommers, it tells the story of Rick O’Connell and Evelyn “Evie” Carnahan, who traveled to a lost Egyptian city in search of knowledge and treasure. Evie’s brother, Jonathan, tagged along, as well as their partner, Gad Hassan. Competing against another expedition, they found a remote area to dig. Evie wanted to find “The Book of Life.” In searching for it, they made the minor and forgivable mistake of resurrecting Imhotep. Okay. Maybe that wasn’t so minor or forgivable–but it was a mistake! Imhotep, a somewhat ill-tempered mummy, began sucking life out of people and plotting the resurrection of his lover, Anck-Su-Namun. For the latter goal, he needed a human sacrifice, and he chose Evie for that role. We can forgive her for being not quite sold on this idea. The Mummy (1999) is camp. The tone is light-hearted, even comic; the conflict is melodramatic; and the characters are two-dimensional. But it’s a fun watch with great action set-pieces, a romantic subplot, and spirited dialogue. The CGI isn’t convincing, but rather than distracting from the film, it added to my enjoyment. It added to the camp feel of The Mummy and that’s what makes it a fun movie.

Brendan Fraser plays Rick O’Connell. He’s an adventurer in search of treasure, and with Evie, he also finds love. For reasons that don’t quite make sense for the character, he’s introduced to us as solder in the French Foreign Legion. Though I don’t believe Fraser is a great actor, he was well-cast in this role. He has a persona that he presents on screen–the comic alpha male–that was prefect for Rick. Arnold Vosloo plays Imhotep, the mummy, and Patricia Velásquez plays Anck-Su-Namun. John Hannah brought Jonathan to live, and Kevin J. O’Connor played Beni, Rick’s sidekick-turned-rival. Perhaps the most intriguing character was Ardeth Bey, played by Oded Fehr. He’s the leader of the Medjai, a warrior tribe entrusted with the duty of preventing the very events in this film. I give Rachel Weisz, as Evie, my award for best actor. As a librarian and scholar, she’s motived by uncovering knowledge rather than the quest for treasure. Clumsy and inexperience, she nevertheless grounded the expedition in fact, and when confronted with the supernatural, she found the courage to confront it. She’s the only character who experienced a character arc–from scholar to adventuress. It’s unfortunate in the final reel that she played the damsel in distress–that overworked, misogynistic cliché–but she redeemed herself in the end by figuring out how to break the mummy’s curse.

The Mummy (1999) is a candy bar rather than a breakfast bar. It’s sweet, tastes delicious, and satisfies the chocolate cravy, but it lacks protein. It’s a nice treat for the diet, but it fails to fulfill nutritional needs. As I said above, it’s a movie to watch when you crave mindless entertainment. It’s best not to think about the movie too much, because its plot is meledramatic and its character development is thin. Though I’ve seen the movie a dozen times–at least–it has never grown old. In fact, I think I enjoy The Mummy (1999) more as time passes. 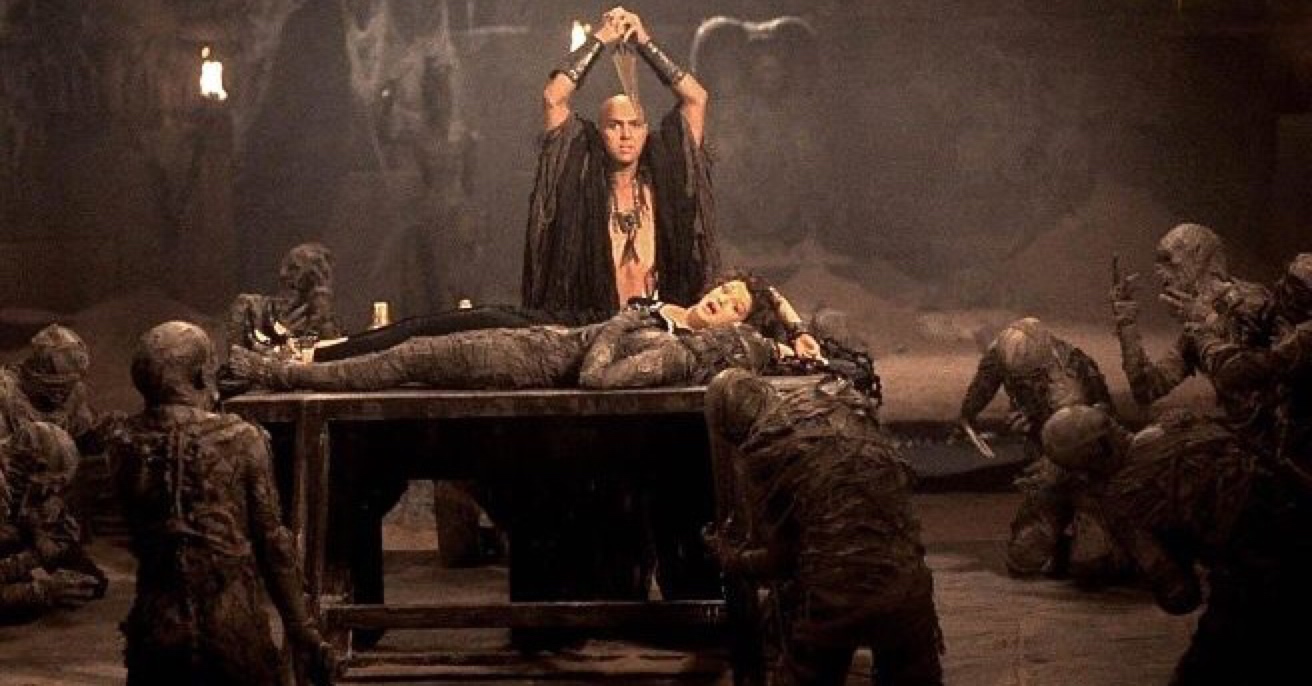