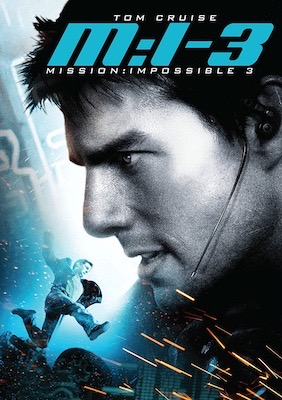 It’s not just that I cried that’s worth noting but the reason I cried. I cried because Mission: Impossible III (2006) is so much better than Mission: Impossible II (2000). I paused the movie and cried. This is so much better than the last movie, I said, through my sobs. Why couldn’t the last movie be this good! No doubt, there’s a psychological defect in me that causes me to be too emotional over film quality. One day I’ll see a psychologist about it. Maybe he’ll prescribe a tiny blue pill to cure it. Or maybe not. Defective as it is, I like about myself that I love quality entertainment. And I love it when a movie franchise finds its niche. The Mission: Impossible franchise found its niche in MI:3. In MI:1, Brian De Palma transformed the franchise from a television show to an action movie. MI:2 struggled with its place in the action genre; it mistook itself as a James Bond movie. But in MI:3, director J. J. Abrams gathered the pieces and glued the vase back together into something far more beautiful than it had ever been.

In my review for MI:2, I stated that a modern film franchise needs to be something more than a collection of sequels. Sequels satisfied us in the 1970s, 1980s, and even into the 1990s, but with developments like Marvel Cinematic Universe, the Harry Potter movies, and the extension of Star Wars into a new trilogy and into the anthology films, audiences are expecting to see a character, like Tom Cruise’s Ethan Hunt, arc not only over the course of a movie but also over the course of the franchise. Hunt is a prefect example of what I’m talking about. At the end of MI:1, he felt battle wary and withdrawn, even disillusioned. He no longer wanted to work in the field. That fits well with where he’s at at the beginning of MI:3, where he no longer works in the field but trains agents instead. Two pieces of a jigsaw puzzle fit together. Too bad that between those two pieces we have to make room for MI:2.

Mission: Impossible III begins tense, grew tenser as it progressed, and ended tense. Philip Seymour Hoffman, as Owen Davian, gives us, arguably, the most compelling villain in the series. He’s ruthless and calm, courageous and calculating. He knows he’s a bad guy, and he finds confidence and security in his evildoing ways. He knows that no matter how hard he pushes them, the good guys will never go the distance. They will never cross that line that separates them from evildoers. In one scene, Hunt came close to that line, even has his foot on it, but he never crossed it. Davian, knowing Hunt would pull himself back, never felt threatened. But he threatened Hunt, and the rest of the movie involved his efforts to make good that threat.

A major complaint I had about MI:2 concerned its treatment of the female lead, Thandie Newton as Nyah. After introducing her as a confident thief, the filmmakers ignored that characterization for the rest of the movie and treated her as a Bond Girl, as a damsel in distress. She became someone for Hunt to protect and rescue. This was a throwback to a more sexist attitude. This movie made no such mistake. The women in MI:3 were strong, competent, and courageous. Though a couple needed rescuing during the movie, once rescued, they proved to be capable fighters. And one, Hunt’s love-interest Julia, in a dramatic and emotional scene, reversed the roles and rescued Hunt.

It was at that scene where I cried. Mission: Impossible III is far more emotional than the previous two movies. The stakes are personal for Ethan Hunt, as two women he cares about, one whom he loves, are threatened. Davian’s cold demeanor forces us to feel Hunt’s emotion sharper and clearer. In one scene, as Davian forced Hunt to plea for Julia’s life, Cruise gave us the best performance I’ve ever seen from him. Every emotion felt raw and honest. We witness the man in love conflict with the train agent. We saw the spy struggling to remember and practice his spy craft, as the man feared for his lover’s safety.

That scene forces me to give Tom Cruise the best actor award. Man, do I want to give it to Philip Seymour Hoffman, or to Michelle Monaghan, who played Julia. Both gave excellent performances. But Cruise delivered, not only during that scene, but throughout the movie. Other actors were: Ving Rhames as Luther Stickell, Jonathan Rhys Meyers as Declan Gormley, Maggie Q as Zhen Lei. Keri Russell played Lindsey Farris, an agent Hunt trained and thought of as a sister. Billy Crudup and Laurence Fishburne played IMF directors. For the first, but not the last time, Simon Pegg plays Benji Dunn, a regular member of Ethan’s team.

Behind the camera. J. J. Abrams directed. Along with Alex Kurtzman and Roberto Orci, Abrams co-wrote the screenplay. One day, maybe, I’ll write an essay about the contribution Abrams is making to America culture. I’ve called our times a Second Golden Age for Hollywood, and Abrams is a leader in this. Michael Giacchino composed the score. Dan Mindel was the cinematographer.

If I were grading movies the way teachers graded papers, I would be tempted to give Mission: Impossible III a 100%. Nothing felt false. Everything felt authentic–the conflict, the relationships between the characters, their goals and motivations. There’s a realism in the events that I don’t often feel with action movies. So yes, a perfect score. If you’ve never seen this movie, do yourself a favor and watch it.