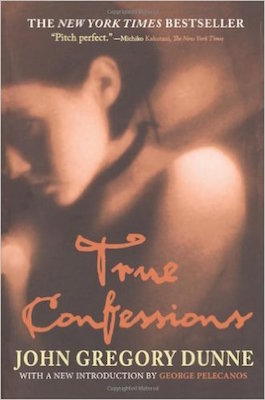 Whoever killed the woman had cut her body in half, at the waist, and dumped her naked on the corner of 39th and Norton. Two imperfect homicide detectives pulled the case. Frank Crotty was more concern with the motel he was opening with Chinese investors. “You think I’m going to lose any sleep over who took this dame out, you’re shitting strawberries and whipping cream, is what you’re shitting, you think that,” he told his partner, Tom Spellacy. Spellacy had his own concerns to distract him from the case, namely the sibling rivalry with his brother, Monsignor Des Spellacy and the desire to redeem his reputation after being caught in a corruption scandal. Whoever killed the woman cared more about her than these detectives, so is it any surprise that the murder investigation would take backstage in these men lives?

Based loosely on the Elizabeth Short (the Black Dahlia) murder of 1947, True Confessions (1977) begins with the murder of Lois Fazenda, but it is less about the investigation in this murder and more about the personal problems Tom Spellacy, the protagonist, faces. His wife is in a mental hospital. He’s having an affair with woman he had rescued in a hostage crisis. And his brother, Monsignor Spellacy, an important man in the local dioceses, is playing political footsie with Jack Amsterdam, with whom Tom has a dubious pass.

John Gregory Dunne (1932-2003) had enjoyed a respectable literary career. He’s the younger brother of Dominick Dunne, whose Too Much Money I had reviewed in 2011. He’s also married to fellow novelist Joan Didion. Along with writing several novels and nonfiction books, Dunne, with Didion as his collaborator, wrote several screenplays, including Panic in Needle Park (1971), the Barbara Streisand’s version of A Star is Born (1976), and an adaptation of True Confessions (1981), starring Robert De Niro and Robert Duvall. He died of an heart attack in 2003.

What Tom Spellacy remembered later was that it began as just another 187. One of the 212 that year. One of the 19 that month. One of the two that day in April. The other homicide, the one that nobody ever remembered, was a shine killing over on Central Avenue. The newspapers, however, never bothered with dinge 187s. A colored girl, even one cut in two, the first thing the papers would say was, “A hooker,” and the second thing was, “Forget her.” The Express, especially. If it were only a shine, fuck her. Stick with the important things. Like, 2D Mickey Rooney Marriage Hits Rocks. If you were a smoke, the only way you’d ever make the Express was the day you celebrated your 142nd birthday. SAW A. LINCOLN, LOCAL MAN CLAIMS, was the way the Express would put it. Just underneath, BABY THRIVES ON SIX CUPS OF COFFEE A DAY.

My disappointment in True Confessions have nothing to do with the writing. It is an interesting story, well written, with convincing characters and tense drama. But I chose to read it because I thought it would be a literary detective novel based on the Black Dahlia murder. Like James Ellroy’s novel, The Black Dahlia, I thought True Confession would be an imaginative interpretation of the case. I thought it would focus on the murder investigation. But the murder of Lois Fazenda is only a backdrop in the novel. It just happened to be the case Spellacy was working on during a transitionary period of his life. Novels are about transitions; they are about that moment or chain of events that forces the protagonist from one trajectory to another. As such, True Confessions is exactly what it is supposed to be. Tom Spellacy does solve the Fazenda murder, but the solution was anticlimactic and unsatisfying. It was merely a subplot that needed to be tied up before the main plot reached its climax.

But plot isn’t the driving force of this novel. Nor are the characters. Themes drive this novel. There are two main themes. The first is corruption. Corruption in the police department. Corruption in the Catholic Church. There are a lot of willing and dealing in this novel, a lot of backroom agreements, a lot of money changing hands, and a lot of turning a blind eye. It is no accident that many important scenes takes place in a confessional. Sibling rivalry is the second theme. The main conflict–which I realized relatively late in the novel–is between Tom and Desmond Spellacy, the brothers, the homicide detective and the monsignor. Like many family conflicts, it is subtle and intangible, but it served to create several tense scenes between them. And the novel can only end after the brothers come to terms with each other.

Appearances. They were very much on Desmond Spellacy’s mind today. Augustine O’Dea, for example. Tall, in his late fifties, with massive shoulders and the mane of snow-white hair. The very picture of a bishop. He had only one drawback: he was a boob. A view, Desmond Spellacy knew, that was shared by the Cardinal. That big, booming voice always ready to discourse on Saint Patrick and the snakes or the day Babe Ruth said hello to him at Comiskey Park. Two favorite topics. (Desmond Spellacy had once pressed him on the Babe and what the Babe had actually said was “Hija, keed.”) But…Always the but. There was something about Augustine O’Dea that seemed to amuse the Cardinal. With rapt attention, Hugh Danaher listened to the endless monologues about the day little Bernadette met our Lady at Lourdes or the absence of snakes on the Emerald Isle. Is that right, Augustine? I didn’t know that, Augustine. It was as if the vicar general provided the Cardinal with his own relief from the byzantine tedium of running the archdiocese.

The novel is not without social commentary. We see it in the wheelings and dealings inside the Catholic Church, as Monsignor Spellacy struggle with such issues as financing a new hospital or deciding which contractor to use. We see it in the politics of who will be next chief of police. We see in the racial slurs Tom Spellacy and Frank Crotty use to describe everyone from blacks to Chinese to their own Irish. Most of all, we see it in their lack of concern over the murder investigation. Once they learn that Lois Fazenda was, if not a prostitute, then a woman of loose morals, they lost motivation to solve the case. This contrasts to the public interest generated by the sensationalized newspaper coverage. The press dubbed her “The Virgin Trump, and that was all that was needed to spark the public interest and sell newspapers. Racism, sexism, corruption, the sensationalization of crime, and back-room politicking–these are timeless American themes, timeless American problems. This isn’t the first novel to deal with them, nor the best, but these themes add texture and relevancy to True Confessions. They help root it as an interesting American novel.

I leave True Confessions with mixed feelings. I enjoyed reading it, and for that reason, I recommend it. That recommendation comes with a disclaimer. Before picking up this book, ask yourself what you want from it. If you want a gritty novel about the Black Dahlia murders, as I wanted, then I recommend you read Ellroy’s The Black Dahlia. But if you’re seeking a literary novel about a man coming to terms with his own imperfections and the failed relationships in his life, then True Confession is a good novel to read.