Too Much Money by Dominick Dunne

Home / Too Much Money by Dominick Dunne 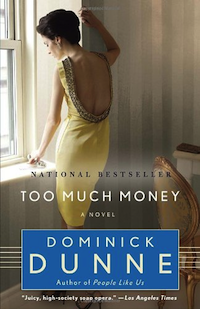 Considering how long Dominick Dunne had been writing and the respect he had gained at it, I expected a better novel. I found the prose clunky, the dialogue stilted, and the plot uninteresting and loosely developed. I’m more forgiving about these issues with Too Much Money than normal, because it was Dunne’s final book. While writing it, he was dying, and he knew he was dying. No doubt he felt rushed to complete it. Despite its flaws, it was still a fun book to read, so now that I’ve dispense with the books weaknesses, let me tell you its strengths.

Dunne writes close to home. The protagonist, Gus Bailey, is a thinly disguised alter ego, and the troubles Bailey’s experienced in his later years are the same as Dunne’s. “Close to home” means he wrote about the people he knew, his friends and foes. It also means that he wrote about New York society, the rich and the famous, the people who suffered from that infirmity Dunne calls too much money. This novel’s biggest strength is that it’s a portrait of that society, and I imagine one can argue that High Society is the true protagonists of this novel.

It’s a society in turmoil, as America suffers an economic crossroads. Billionaires go to prison for crimes against their shareholders; others lose their money and have to economize. Some rise; others fall. Old Money surrenders long-held status to New Money. Dunne records these changes with intimate knowledge, and in reading it, I had a sense that this was less a novel and more a memoir where the names had been changed. It reads like a gossip column, and who doesn’t love hearing salty gossip?

As I said before, the plot is loosely developed and not very interesting. It concerns Gus Bailey’s conflict with Perla Zacharias, whose husband died under suspicious circumstances. He intended to write a novel, entitled Infamous Lady, based on the incident, and she wanted to stop him. Their blow-by-blows were scant and far apart, and the conflict was never brought to a boiling point. More development would’ve made the plot more interesting, but that wasn’t Dunne’s focus.

I think the reader who would most enjoy this novel is the reader who loves puzzles. Since all the characters are based on real people, one charm of this book is puzzling out who inspired this character, who inspired that one, did this really happen to so-and-so. I am not that reader. I wanted a stronger plot.