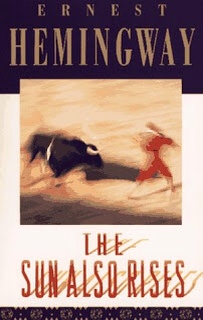 Or perhaps he doesn't like it as much he finds it is his role in life. Whether watching world affairs as a newsman, enjoying a good bullfight, or witnessing the drama played out by his friends as they contend for the affections of the wayward Lady Ashley—Jake finds himself on the sidelines. Benched by a war wound from the Game of Love, he's condemned to only a platonic relationship with Lady Ashley, the woman he loves. The Sun Also Rises is about that lingering wound. Like most literature written in the decade following World War I, it is about the war wounds that do not heal with peace. It is about the displacement and the disillusionment that pesters soldiers long after the fighting stops. This is Hemingway's great expatriate novel, and it is my favorite novel of his.

Ernst Hemingway (1899-1961) was a man writing about the lives of men. His themes were manly themes—war, hunting, fishing, getting the girl, getting drunk. It is true that his writing is misogynistic and that his female characters tend to be flat. Brett (Lady Ashley) is treated by the men as nothing more than a prize to be won, and she accepts this role with the same dispassionate resignation Jake feels as the impotent lover. This cutout-doll depiction of women is arguably the worst criticism to be leveled against Hemingway, but I believe the reader who rejects his works for it, who refuses to read him, is cheating himself or herself of some of the best American writing every written.

Because Hemingway was the master of subtext. He was the master of implications. When your ninth grade English teacher instructed you to read “between the lines,” it was because she knew that was where Hemingway wrote his best. The tension in this novel is not created by what the characters say to each other but by how much they do not say. How often do we really speak our minds? Do we not censor ourselves more often, for the sake of harmony, or to spare feelings, or to avoid a fight we fear we might lose, or because some things are hard or inappropriate to spell out?

It was like certain dinners I remember from the war. There was much wine, an ignored tension, and a feeling of things coming that you could not prevent happening. Under the wine I lost the disgusted feeling and was happy. It seemed they were all such nice people.

One joy of reading this novel is the local color it contains. The novel begins in Paris and ends in Madrid. En route Hemingway takes us to a small fishing village in the Pyrenees Mountains, to the seaside resort of San Sebastián, and to the bullfights of Pamplona, where most of the action is set. One could read The Sun Also Rises as a travelogue. Five friends—Jake, Brett, a visiting American writer, and two of Brett's lovers—travel to Pamplona to participate in the Fiesta of San Fermin and to watch the bullfights. A simple agenda made tense not only by two rivals for Brett's affections coming but also by Jake's own unsatisfied feelings for her.

Women made such swell friends. Awfully swell. In the first place, you had to be in love with a woman to have a basis of friendship. I have been having Brett for a friend. I had not been thinking about her side of it. I had been getting something for nothing. That only delayed the presentation of the bill. The bill always come. That was one of the swell things you could count on.

I consider The Sun Also Rises a must read for anyone who wants to understand the American novel or American literature. I recommend it for everyone else.