The Sorrows of Young Werther by Johanna Wolfgang von Goethe 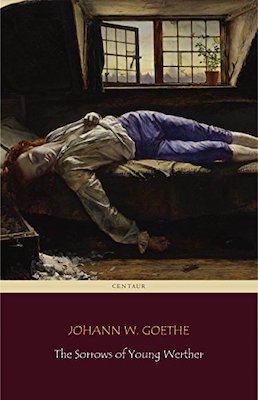 According to Wikipedia, when The Sorrows of Young Werther was published in 1774, it became the world’s first best seller. Since book publishing was, at best, only a toddler, since copyright laws were nonexistent, and since it is doubtful anyone was tracking book sells statistics, I find this claim–at least in the literal meaning of best seller–dubious. There is, however, no doubt that the novel propelled its 24-year-old author, Johann Wolfgang von Goethe, to fame. Werther Fever ran throughout the German-speaking world. I liken to an early cosplay, where, at its most innocence, it prompted young men to dress as Werther dressed. On a darker note, it also incited a spate of copycat suicides. I give nothing away in this. It’s clear, if not from the title, but then from the early chapters that Werther’s a doomed character.

As most novels of the period were, The Sorrows of Young Werther is an epistolary novel. It’s written in a series of letters from Werther to a friend named Wilhelm. In these letters, Werther details his visit to a village called Wahlheim and, later, his sojourn in Weimar, a capital city. Scholars classify this a Romantic novel; that is, a novel that emphasis individuality and character emotions. More specifically, those scholars placed it in the Strum and Drang period of German Romanticism.

What people these are, whose entire souls are occupied with protocol and ceremony, who devote their devious creative energies, for years on end, to moving from one place higher up that table! It is not as if they had no other affairs to see to: quite the contrary, the work piles up because they are so busy with petty, irksome questions of advancement that they have not time for important matters.

Werther is an artist who ventured to Wahlheim for aesthetic reasons. While visiting the village, he met Lotte, a young woman who, due to the death of her mother, cared for her younger siblings. Though she’s engaged to Alfred, Werther allowed himself to fall in love with Lotte. The Sorrows of Young Werther chronologizes not only his day-in-day-out relationship with Lotte and Alfred but also the angst he suffered due to his unrequited love. That’s the biggest strength of this novel–the exploration of Werther’s emotional and psychological journey.

His character arc begins with idealism and ends in despair. Goethe shows us every stage of this arc in prose that runs the scale between humor to tragedy. In many passages, The Sorrows of Young Werther is painful to read, because Werther’s emotions come through potent and raw. I understand why young men of the period, in reading it, related to Werther. I live in another period and I’m no longer a young man, but I related to him. Who wouldn’t? Who haven’t suffered unrequited love? Who haven’t experienced bouts of self-loathing and depression? Werther isn’t just a symbolic figure for a man of his own time and place; he’s a symbol for all of us–male and female–no matter where we live or what our epoch brings.

Along with the obvious themes of unrequited love and depression, The Sorrows of Young Werther explores themes related to the class struggled and to nonconformity. In one very painful scene, his host asked him to leave a gathering, because Werther wasn’t an aristocrat. In other scenes, it was the villagers of Wahlheim who treated him with difference, because he belong to a higher class than them. Not an aristocrat, but also not a peasant. It’s as if Werther doesn’t belong anywhere. There’s truth in that, because to his core he’s a nonconformist. Does he mean to be? Perhaps, but the way I interpret his relationship with Lotte and Alfred is as a struggle to join that society where he knows he doesn’t belong.

I wish someone would have the courage to mock me to my face, so that I might thrust my sword through his body; the sight of blood might afford me some relief. Ah, I have snatched up a knife a hundred times, meaning to relieve my sorely beset heart. People tell of a noble breed of horses that instinctively bite open a vein when they are exhausted and feverish, in order to breath more freely. I often feel the same, and am tempted to open a vein and so find eternal freedom.

Johann Wolfgang von Goethe (1749-1832) was born in Frankfort, but he lived most of his life in Weimar. He’s an old-fashioned man of letters. Along with novels, he wrote poetry, drama, criticism, and scientific treatises. He also worked in politics, as an advisor to Duke Karl August, who ennobled Goethe in 1782. During the Neapolitan Wars, he fought in the Battle of Valmy. His inspirations for The Sorrows of Young Werther was his own failed love affair with Charlotte Buff and the suicide death of his friend Karl Wilhelm Jerusalem. I think most modern people best know him for Faust, which is probably known more for the operas, symphonies, novels, and films it inspired rather than for Goethe’s original play.

Though I’m uncertain if the term existed at the time, but The Sorrows of Young Werther is a psychological novel. It does a great job of exploring Werther’s inner world and the angst he suffered. At times, it’s a sad novel to read, because he suffers from depression. Perhaps it’s a work for literary scholars or fans of Classical Literature, but I think there’s a lot in its pages for other readers to find and enjoy. I know most readers will relate to Werther and enjoy the novel for that reason.