The Sheltering Sky by Paul Bowles 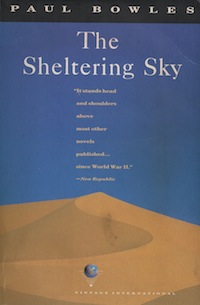 There is a philosophy in this novel, but I fear I’m not smart enough to grasp it. So I come back to it every few years, read it again, and puzzle over what it is that I’m reading. What I find in its pages is a emotional pot simmering on the stove. It looks fairly peaceful, but across the surface, there are ripples that hint of the turmoil that lies deeper in the stew. The conflict in this novel doesn’t exist in what its characters say and do; it exists in what they avoid saying and doing.

On its most superficial level, this is a clash-of-culture novel about three American’s who travel to North Africa shortly after World War II. Since the war ruined Europe, they, determined to travel, came to Africa. They hope to find its culture still intact, and it is, but a problem lies that it’s a culture alien from their American comfort and sensibilities. The hotels are dirty; they lack private bathrooms; they serve broth full of dead weevils. Bowles clearly respects the foreign culture more than his own, and a strength of this novel is the local color of the region. He paints a portrait of North Africa that, though not as clean or luxurious as the Americans wish, is simple and dignified.

On a deeper level, it is the story of a failed marriage. The principle characters, Port and Kit Moresby, find themselves paradoxically still in love but unexplainably estranged. Bowles wastes no words in backstory. How they met, fell in love, married, and grew distant from each other are never explained. Perhaps they don’t understand themselves what parted them. We’re left with the effect without the cause. Some might consider that a weakness of the novel, but I found it made their predicament more potent and uncompromising. Since there was no understandable way into this mess, there is no clear path out of it. Nothing to forgive. Nothing to forget. Just this weight of their inability to connect as a couple.

I recommend this novel, especially to readers who want to read something out of the norm. This is my third or fourth reading of the novel, and each time I read it, I find new depths of meaning. I like novels that are thought provoking, and this one clearly is. I intend to read more by Paul Bowles.