The Red Badge of Courage by Stephen Crane

Home / The Red Badge of Courage by Stephen Crane 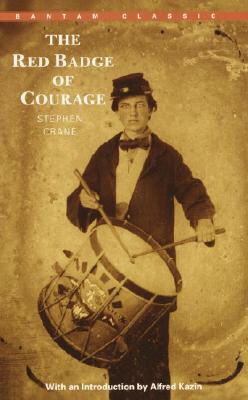 Since war has played a significant role in shaping human society, war novels play a significant role in world literature. The first literature of the western world, the Homeric epic poem The Iliad, narrates an episode in the Trojan War. It focuses on the plight of one Greek soldier, Achilles, who feels his honor insulted when the Greek high king, Agamemnon, steels his war prize, the captive Briseis. Enraged Achilles withdraws from the war, until the Trojan Hector kills Achilles' companion, Patroclus. He returns to the war and kills Hector in single combat. To write honestly about war is to be inherently anti-war, and focusing on the personal plight of a particular soldier is one tactic for writing honestly about war. As Homer before him, Stephen Crane adopted this tactic to create a classic American war novel, The Red Badge of Courage.

In America literary history, Stephen Crane (1871-1900) is a relatively unaccomplished writer. Besides The Red Badge of Courage, he had written only one other novel worth noting, Maggie: A Girl of the Streets. Like Red Badge, Maggie is a short novel, better called a novella than a novel. Crane preferred shorter work, and his short stories, especially “The Open Boat” and “The Blue Hotel,” are well-read in literary circles. He lived a short but adventurous life. He travelled intensively and served as war correspondent in both the Greco-Turkish War (1897) and the Spanish-American War (1898). He traveled with his common-law wife, Cora Taylor. After the Spanish-America War, the couple settled in England. On a trip to a health spa in Germany, Crane died on May 28, 1900. Though only 28 when he died, he had established a literary reputation that survives to this day.

In The Red Badge of Courage, Stephen Crane narrates the story of Henry Fleming, an idealistic youth in the Union Army during the American Civil War. On the eve of battle, Fleming worries about his courage. When his Baptism by Fire comes, will he prove himself a worthy soldier or a coward? Like Achilles before him, Fleming is one soldier in a greater campaign, and like Achilles, he must face his own personal demons in order to find his place in that war. Achilles faced his rage; Fleming, his cowardice.

I like novels with well-defined character arcs, where the events of the story, its plot, transformed the protagonist from one state to another. The Red Badge of Courage can be read as a coming-of-age novel, in which, during the course of a two-day battle, Fleming matures from an idyllic, naïve youth to an experienced veteran. During the course of this passage, he witness horrors that he could never imagine back on his New York farm, the sight of the dead and the wounded, the cacophony of war, the whistling of bullets. Though he was only a foot soldier, during his wanderings of the back lines, through what he witnessed and through overheard snippets, the readers experience the battle through the point-of-view of the generals mounted on their fine horses, the wounded marching to safely, and the dying experiencing their final breath. All of this in only one hundred thirty pages.

I wish Stephen Crane had lived longer and written more, but the greatness of a writer lies not how many books he had written but in the quality of those books, in the choice of his themes, and in the beauty of his prose. Homer left us with only two works, The Iliad and The Odyssey. Crane left us more to measure him by, but not enough to satisfy our interest in his talent. The Red Badge of Courage is a simple novel, filled with elegant prose, but its pages describes a remarkable journey from youth to manhood, from cowardice to courage, from ideal to reality.