The Perks of Being a Wallflower by Stephen Chbosky

Home / The Perks of Being a Wallflower by Stephen Chbosky 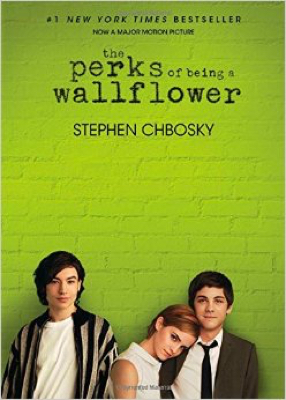 As a rule, I avoid these bitter-sweet, coming-of-age novels. Don’t ask me why, because I fear the answer will come too close to the adage against judging a book by its cover. Is judging a book by its topic or sub-genre just as bad? I made an exception for The Perks of Being a Wallflower, because it related to two goals that I want to achieve this year. The first is to read more novels, and one strategy I have is to read shorter novels that I can finish within a week. Wallflower is such a novel. The second goal is to write more reviews of novel-to-movie adaptations. This novel was put to film in 2012. I have yet to see that movie. In truth, until last week, I was more interested in seeing the movie than I was in reading the novel. Again, don’t ask me why, because I fear my answer will be superficial and unconvincing. Since I prefer to read the novel first, I’ve been putting off seeing the movie until I read Wallflower. I finally got that ROUNDTOIT I’ve been waiting for, so I read the novel. Now that it’s read, I know I’ve been cheating myself from a wonderful story.

Born in 1970 in Pittsburgh, Stephen Chbosky, who wrote The Perks of Being a Wallflower, enjoyed the typical middle-class, suburban upbringing. While in high school, he met Stewart Stern, the screenwriter of The Rebel Without a Cause, who befriended and mentored the young Chbosky. After graduating from the University of Southern California—he majored in screenwriting—Chbosky wrote and directed The Four Corners of Nowhere. He wrote other screenplays, but they were never produced. In 1994, he came up with the idea of The Perks of Being a Wallflower and began writing it. MTV Books published it in 1999. Viewed as a Catcher in the Rye for a new generation, the book became an immediate success. Chbosky wrote and directed the movie adaptation for the 2012 movie. He wrote for the television series Jericho, and he co-wrote the upcoming live-action adaptation of Beauty and the Beast.

After the death of his best friend, Charlie—the wallflower of the title—began high school friendless and full of fear. After his favorite teacher advise him to break out of his isolation, to participate, Charlie headed to a football game, where he met Patrick and Sam, brother and sister. Though seniors, they became interested in the younger student and befriended him. They introduced him to their other friends, invited him to parties, and introduced him to the vices we all learn as teenagers. Charlie developed a crush on Sam, because that’s what boys do, but she asked him not to think about her in that way. This unrequited love story becomes the central conflict of the novel.

In form, it’s an epistolary novel, a novel written as a series of letters. We never learn who the recipient of the letters is, except to know that he’s a man, older, and hence had been through the same teenage angst that Charlie suffers from. He’s a stranger to Charlie, which allow Charlie to be honest and open about his life. In other reviews, I had argued against epistolary novels, because there is an emotional distance between the narration and the events it describe. At least that’s the norm, but I didn’t experience that here. Chbosky managed to keep the emotions keen and fresh. And he reveals an advantage of the epistolary format that has eluded me until now. Since each letter ends in unresolved conflict, in a dramatic event, and since Charlie, writing the letter, doesn’t know what will happen next, he keeps the conflicts sharp and pressing. This gave Wallflower that page-turning intensity we want from all we read, but especially from the modern novel.

The characters are interesting and approachable. Charlie’s bookish and withdrawn nature reminded me of myself at fifteen and sixteen, but he was also willing to take more risks than I was at that age. Sam, the girl he loves, is outgoing and spirited, but like everyone in the novel, she suffers hangups and unpleasant memories. Patrick, her step-brother, is gay. Though he has come to terms with his sexuality, his lover insists on concealing their affair. The Perks of Being a Wallflower follows them through a year of school—through the homecoming dance, the football season, Christmas break, and onto the senior prom and Sam’s graduation. During this year, Charlie learned how to break out of his shell only to be reminded, at the novel’s climax, why he required it in the first place.

Wallflower deals with the themes you would expect of a modern coming-of-age novel—unrequited love, drug and alcohol use, early romantic and sexual relationships. It also touched on darker themes, like rape, sexual abuse, mental illness, and suicide. In short, it is about kids growing up in an America that had grown so complex that nothing, not even being a kid, is simple or idyllic. The tone is bitter-sweet. In its pages, there is both comedy and drama. I think it is an interesting novel for the literary student to read, because Charlie, despite his efforts to tell it as it is, is still—like all first person narrators—an unreliable narrator. If you are a student and your teacher asks you to write about an unreliable narrator, The Perks of Being a Wallflower would be a good choice.

Since it’s told in a series of letters, the events are chronological with very few flashbacks. That makes it a straightforward and simple novel to read. The complexity comes from the story it tells, the characters it involves, and the themes it pursues. Its contemporary setting along with the events following a year of high school ground it in the familiar. Sometimes we read novels to escape reality, but other times we read novels to remind ourselves that we aren’t the only ones who suffer these hardships and mishaps. The Perks of Being a Wallflower falls into the latter. Even if it is nothing but a bitter-sweet, coming-of-age story, it is a novel worth reading.