The Godfather by Mario Puzo 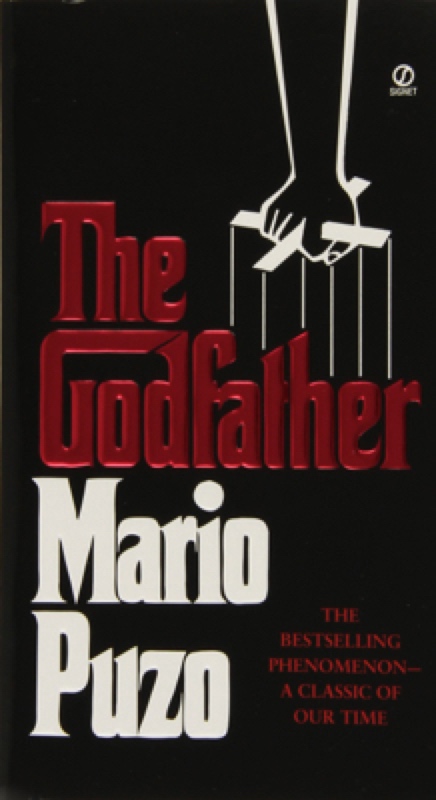 As a new nation, America lacks a national epic. We do not have an Iliad or a Gilgamesh Epic or a Beowulf to connect us to antiquity, to a time before written language, to the so-called Age of Heroes. As we envy other nations for that connection, we struggle to fill this void with a patriotic pride in our history–our Revolutionary War, the Civil War–or even with our guilt over African slavery and the conquest of Native Americans. But we also struggle to fill it with our own heroic tales. I think this is why we cling so tightly to our Star Wars and Avengers movies. They give us the heroes every nation needs. The more we understand our history–the more we accept there’s as much guilt as glory in our past–the more we need those mythological heroes to remind us of our national character, our values, and our purpose. In a very real, albeit anti-heroic way, Mario Puzo’s The Godfather is part of that American mythology.

You know the story. In 1972, Francis Ford Coppola adapted the novel into a movie so iconic its still considered a must-see film. Even if you’ve never seen it or read the novel, through cultural references in other movies, on television shows, and in stand-up jokes, you’re familiar with the plot, characters, and themes of Puzo’s 1969 novel and the movie it inspired. You’ve heard Marlon Brando talking in his raspy whisper; you’ve seen Al Pacino, sitting in an easy chair, talking murder in the same calm voice the rest of us use for conversations about the weather and mundane errands. You know the often quoted, too-often parodied line about “an offer he can’t refuse.” The Corleone Family and the story they experienced had become part of America’s collective consciousness.

It’s a novel about a great man, Vito Corleone, the head of one of the Five Families. As a Mafia chiefdom, he trades favor-for-favor to become one of the most powerful underworld bosses in America. He controls judges and politicians. When an upstart named Virgil “The Turk” Sollozzo comes to Corleone, The Godfather, with an offer to go into the drug trade, Corleone rejects the offer. That refusal ignites a gangland war that leaves Corleone hospitalized and forces his youngest son, Michael, to rise to leadership. There’s no reason to tell you more details about the story, because, as I said, you already know the story.

One joy of reading The Godfather is experiencing this familiar story in greater detail. Coppola’s movie did an excellent job of adapting the novel; its one of those rare exceptions when the movie is better than the novel. A part of me resents that, because I fear it gives people an excuse not to read the novel. That’s unfortunate, because the novel is strong and enjoyable. Though both the movie and the novel tells the same story, the novel allows for more depth. Puzo understands people. He knows how to write about them and make them compelling characters. In Coppola’s movie, through the performances of Brando, Pacino, Robert Duvall, James Caan, Diane Keaton, and too many others to name, we sensed the depth in these characters. But in Puzo’s novel, we experience that depth. Puzo takes us into their minds and shows us their histories, hopes, and fears. No one is heroic in The Godfather, but it’s equally true to say that no one comes across of a pure villain. These characters are people with hopes and challenges, strengths and weaknesses, vices and virtues. Even Sollozzo’s murderous ambitions, considering the violent subculture these characters live in, seem justified when we understand his motives and backstory.

At that time Vito Corleone did not know the effect of this smile. It was chilling because it attempted no menace. He smiled as if it was some private joke only he himself could appreciate. But since he smiled in that fashion only in affairs that were lethal, and since the joke was not really private and since his eyes did not smile, and since his outward character was usually so reasonable and quiet, the sudden unmasking of his true self was frightening.

I called Vito Corleone a great man. This is a term I borrow for Michael Corleone, who refers to his father several times as a great man. But it’s also a motif in the novel to compare The Godfather to generals, politicians, presidents, and even kings and emperors. As the decisions and actions of those leaders impact the lives of common people, so does the decisions and actions of Vito Corleone. Puzo demonstrates this in subplots that follow the careers of lessor characters like Johnny Fontane, a famous singer and Hollywood actor, and Lucy Mancini, Sonny Corleone’s mistress. This was my second reading of the novel. After the first reading, I didn’t understand why Puzo spent so much time on these characters, but now, after my second reading, I realized it was to show us the impact, both positive and negative, their association with the Corleones had on their lives. It’s to demonstrate how the actions of great men affect the lives of lessor people. It also demonstrate how once these gangsters get their hooks into someone, they never let go. Owing a favor to the don is a lifetime debt.

Like many of his characters, Mario Puzo (1920-1999) was the son of Italian immigrates. He grew up in New York’s Hell’s Kitchen neighborhood. During World War II, he was in the US Army, but bad eyesight kept him out of combat. Instead, he worked in public relations, a duty that, I imagine, helped developed him as a writer. After the war, his first two novels, The Dark Arena (1955) and The Fortunate Pilgrim (1965), were critical but not financial successes. With The Godfather, he strived to write a novel with a broader market. I dare say he succeeded. With Frances Ford Coppola he adapted The Godfather into two movies, The Godfather (1972) and The Godfather, Part II (1974). His later novels include Fools Die (1978), The Sicilian (1984), and The Fourth K (1990). His final novel, The Family (2001), was published posthumously.

I will write about one weakness in the novel. There were several racist passages, and other passages were sexist, even misogynistic. It’s unclear to me how much of this prejudice was Puzo’s attitude and how much came from the characters he developed. The racism and sexism felt realistic to the time, place, and culture represented in the novel. Since the society in The Godfather is a microcosm of America as a whole, the novel would’ve felt false if it lacked derogatory attitudes. Still I felt bothered by these passages and wanted to warn the readers to expect them.

Every nation needs its epic stories. Here in America, we find those epics in our motion pictures and in our literature. The Godfather is one such epic. It tells the story about the criminal underworld and the ten-year war it fought in post-war New York. It’s an exciting tale that weaves the lives of several characters into its fabric to show us how this battle affected those involved and the innocent people they knew. If you’re like most Americans, you know this story through the motion picture, but I recommend experiencing it anew by reading Puzo’s The Godfather.