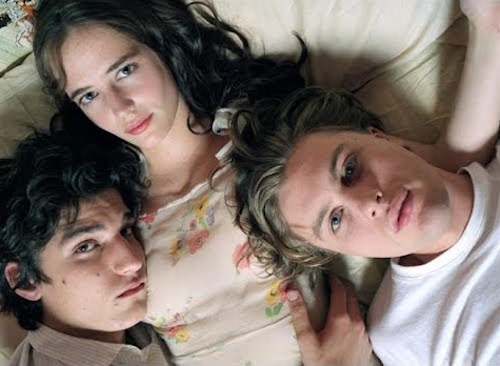 I first saw The Dreamers (2003) a few years ago. I had just seen Eva Green play Vesper Lynd in Casino Royale (2006), and since she played a different type of Bond girl and gave a good performance, I wanted to see her in another role. At the time, there was not much to choose from, because her career was just beginning. She appeared in Kingdom of Heaven (2005), but I had already seen it. And she had appeared in Arsène Lupin (2004), but The Dreamers, about an American living in Paris, incited more curiosity from me. I rented it on Netflix DVD and watched it with a tub of popcorn and a beer.

It was a strange movie, dealing with a strange sexual relationship between two French twins (brother and sister) and an America exchange student. It was one of those movies that, after I watched it, I wasn’t sure what to make of it. I wasn’t even sure whether I liked it. It intrigued me. It forced me to ask questions. It proved to be thought-provoking. All these things I want from a movie. But when I pondered the movie, I didn’t find any answers to my questions, and I wasn’t certain in which direction those provoked thoughts should travel.

When I saw that it was based on a novel by Gilbert Adair, entitled The Holy Innocents (1988), I decided to read the novel. But when I looked to see if there was a Kindle version, I discovered there was not. No matter! I’ll buy it and read it the old-fashioned way. But there was only one printing of the book, and that printing was now a collector’s item. I found copies on the internet, but they were trading for $70 up. Since I’m not a collector, I decided not to pay the price.

As time passed and other movies and books distracted me, I forgot about The Dreamers. But in preforming unrelated research, I researched Eva Green filmography and was reminded of this early work of hers. I decided to watch the movie a second time to see if it would help clarify my thoughts about the film.

Until I saw this movie, I never heard of Gilbert Adair (1944-2011). He’s a Scottish writer who had lived most of his adult life in Paris. The Holy Innocents (1988) was his third novel, but according to Wikipedia, he’s most famous for translating Georges Perec’s novel A Void (1994). Perec wrote this novel without using the letter E, and Adair’s translation also neglects that letter. Since I can’t even spell my name without using the letter E, I’m not sure how this was achieve. But achieved it was, so congrats! Other novels by Adair includes Alice Through the Needle’s Eye (1984), Love and Death on Long Island (1988), and A Closed Book (1999). He also wrote the screenplay for The Dreamers.

Bernardo Bertolucci (born 1940) directed this movie. From his controversial movie The Last Tango in Paris (1972) to his poetic The Sheltering Sky (1990) and his critical successful The Last Emperor (1987), sex, politics, and art–not always in that order–intermix in his movies and infuse them with raw tension. There is something uncomfortable about his movies, an emotion we wish didn’t exist. He dares us to watch things we rather not see, and since we suffer that voyeuristic impulse, we accept the dare. In The Dreamers, he dares us to watch a young man work out his incestuous desire for his twin sister using a surrogate. We want to turn away; instead we watch.

Matthew (Michael Pitt) was an American student living and studying in Paris. He filled his time by visiting the Cinémathèque Française and watching whatever movie was playing. When the French government fired the Cinémathèque founder, Henri Langlois (1914-1977), this help incited the May Uprising of 1968, which serves at a backdrop to this story. At one protest, Matthew met Isabelle and Theo (Eva Green and Louis Garrel), the twin children of a French poet. When their parents leave Paris for a few weeks sojourn in the country, the twins asked Matthew to stay with them. Soon he learned that their affection for each other was inflected with incestuous desire. Theo looked to him as a surrogate lover, as a means to vicariously love his sister. Though Matthew was startled by the role he had to play in their lives, his own desire for Isabelle convinced him to fulfill that role.

As the subject matter required, the sex and nudity in this movie is blunt. It is rated NC-17 for explicit sexuality. All three actors performed several nude scenes, including full-frontal nudity. About halfway through the film, Eva Green took off her clothing, and twenty minutes later, I wondered if she would every put them on again. Since I know several people have strong feelings about sex and nudity in movies, I state this to warn you. If you are offended by nudity, this is not the movie for you.

I am not offended by nudity. To me the test of both sex and nudity in movies–as it is with violence, dialogue, setting, or any other element–is literary rather than moral. Does it help tell the story? Is it required to tell the story? Does it advance the plot? Or does it help develop the characters? Though the nudity is frequent, there is no gratuitous nude scenes in this film. Bertolucci, inspired by how comfortable the actors were preforming nude, filmed one gratuitous scene, but he left it on the cutting-room floor. The scenes that made it into the final cut were needed to tell the story. There would be no way to tell the story without them.

But does this story need to be told?

Since I’m a writer, I believe every story needs to be told. But since I still struggle over the meaning of this story, I wondered if this story was told in the best way. The Dreamers feels like a near miss. It is almost right, but I feel elements are missing. Included in the missing elements are the homosexual scenes between Theo and Matthew. Those scenes, I understand, are in the novel. (Adair was gay, but he shunned writing gay fiction, because he believed his sexuality didn’t define him.) Though the movie hints at homosexual desire between Theo and Matthew, they never developed a sexual relationship. Neglecting that relationship is one reason the movie feels incomplete to me. The circle isn’t complete.

Most of what I think is missing, however, have nothing to do with sex. The movie does such a wonderful job of building the sexual relationship between Isabelle and Matthew that it forgets that a fulfilling relationship is more than sex. As Matthew’s feelings for her deepened, he sought ways to strengthen their relationship without Theo looking over their shoulders. The plot did reach that point, and the movie did show it, but it never developed it. They showed Matthew and Isabelle’s one date in a montage of short scenes. In fact, most of the nonsexual scenes were presented with the same brevity. And I think that is where the movie fails.

There are other themes in the movie that are mentioned without being developed. What is the role of the May Uprising? As the trio lock themselves in the cocoon of the apartment, the protest rages outside. And what connection does their love for the cinema play in this movie? It brings them together when the Cinémathèque is closed, and many of the games they play relate to movie trivia, but I believe Adair was reaching for a more thematic meaning when he wrote the novel. Since I haven’t read the novel, I can only speculate. But I suspect in the adaptation from novel to film, this connection was lost in translation.

This is why I want to read the novel. After this second watching, reading the novel became more important. This time when I went online to track it down, I discovered something new. Though The Holy Innocents is out-of-print, after this movie was released, Adair rewrote the story and published it under the movie title. The Dreamers (2003) is available for purchase as a paperback. I ordered my copy and expect it will arrive in a week or two. Since I believe the movie left important elements underdeveloped, I’m looking forward to reading the novel.

Should you watch The Dreamers?

The movie has a lot to recommend it. The performances were excellent. The theme and plot were intriguing. But any recommendation to watch it will come with a caution that sex and nude scenes are frequent and explicit. You have to ask yourself how you feel about that prior to renting the movie. But the movie is more than those scenes. And there is something to it that inspired me to watch it a second time and to buy the book. Maybe you will have better luck in deducing what that something is. To me, The Dreamers feels close to what it should be but quite there. It is a near miss.