The American Novel: The Natural by Bernard Malamud 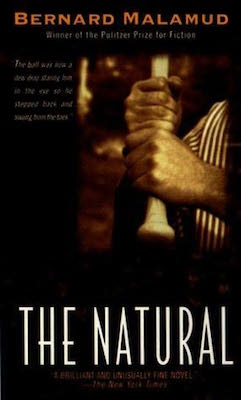 During one of my writing classes at Eastern Washington University, John Keeble assigned us to read a novel each by three writers whom we had never read before. I do not remember the other two writers I chose, but Bernard Malamud was the third, and I chose to read his debut novel, The Natural. Glad in that choice I am. I stray away from naming favorite novels, but there are novels that I kept returning to read again. And again. And again again. Ever since that class, The Natural had been on that list. I’m uncertain how many times I’ve read it, but I imagine it’s at least five times. The most recent was earlier this month. We reread novels to experience again the joy we experienced during the first reading, but we also reread in order to find something new that we had missed before. Novels, especially great novels, are layered, and its impossible to reach and understand all layers with one reading.

But I had another reason for wanting to reread this novel. I wanted to review it here. What is the purpose of this blog if I don’t share with you those works that are most important to me. The Natural is such a book. It is a book that succeeds in all ways that we want a book to succeed. It gives us intriguing characters to sympathize with, place them in dire straits, and explore thought-provoking themes, and all in a subtle, lyrical style that as close to poetry as prose ever becomes.

Bernard Malamud (1914-1986) was the son of a Russian Jew who immigrated to the United States prior to Malamud’s birth. Though raised in poverty during the Great Depression, he managed to attend City College in New York and to earn a master degree from Columbia University. While teaching at Oregon State University, he wrote in his spare time. Along with The Natural, other novels he wrote include The Assistant (1957) and The Fixer (1966), which won him both the National Book Award and the Pulitzer. He finished his career as an educator at Bennington College in Vermont. He died at 71 in 1986.

At thirty-three the Whammer still enjoyed exceptional eyesight. He saw the ball spin off Roy’s fingertips and it reminded him of a white pigeon he had kept as a boy, that he would send into flight by flipping it into the air. The ball flew at him and he was conscious of its bird-form and white flapping wings, until it suddenly disappeared from view. He heard a noise like a bang of a firecracker at his feet and Sam had the ball in his mitt. Unable to believe his ears he heard Mercy intone a reluctant strike.

We meet Roy Hobbs as an idyllic and naive youth, as he travels to Chicago to tryout for the Cubs. Where does he come from is never stated, but since the two places he brags about visiting is Boise and Portland, Oregon, we infer he’s from the Northwest. On train with him is Sam Shepherd, the scout who discovered Hobbs. Also traveling on the train are the sportswriter Max Mercy and the leading batter, Walter “The Whammer” Walbold. When Harriet Bird, a mysterious woman, boards the train, she’s drawn to the sports star, and Roy feels jealous. During an unexpected stop, Sam bets Max Mercy that Roy can strike The Whammer out in three pitches. When Roy achieves this challenge—winning Harriet’s affection—he believes his future in baseball is made.

But other events derail that future. After a decade and a half away from the game, Roy finally finds the opportunity to play with a major league club, the New York Knights. Though more worldly, he’s no less idyllic. He still has the same goal: to be the best best player the game had ever seen, as measured in the records broken. He faces reluctant coaches, greedy owners, moody fans, curious sportswriters—Max Mercy leading them—and crooked bookies. On the simplest layer, this is a novel about Roy Hobbs’ year in baseball, as he hits home runs, inspire team morale, and turn the Knights from the worst team into World Series contenders.

The Natural can be read and enjoyed as nothing more than a sports novel, a baseball tale. Dig a little deeper and you uncover a story about corruption in baseball. Dig a little deeper and you have a story about greed in America, as true today as it was in 1952. Dig a little deeper and you explore ideas about trust and loyalty, about desire and disillusionment. In the end, The Natural is a novel about broken promises; it’s about the life we want to live being in inherent conflict with the life we do live. We root for Roy as he hit home runs, and we feel his pain as he enters a slumps. We are on his side, because he represents the best of us, or rather, he represents the us we want to believe in. At the same time, we recognized he’s a doomed hero. His drive that endears us to him is also his fatal flaw.

And Pop saw a tall, husky, dark-bearded fellow with old eyes but not bad features. His face was strong-boned, if a trifle meaty, and his mouth seemed pleasant though its expression was a grin. For his bulk he looked lithe, and he appeared calmer than he felt, for although he was sitting here on this step he was still in motion. He was traveling (on the train that never stopped). His self, his mind, raced on and he felt he hadn’t stopped going where he was going because he hadn’t yet arrived. But now it was time to calm down, ease up on the old scooter, sit still and be quiet, though the inside of him was still streaming through towns and cities, across forests and fields, over long years.

More than the story or the characters, more than the themes, it is Malamud’s style that keeps drawing me back to The Natural. It is simple and precise, elegant and poetic. At times, it reminds me of magical realism, the literary style of Latin America, as expressed in such novels as Gabriel Garcia Marquez’ One Hundred Years of Solitude, but since Malamud wrote The Natural before magical realism became popular in America, he feels like an innovator. I love the way he uses imagery to express mood and to foreshadow events. He has a talent for using description to expression character’s emotion. And his exposition—often a novel’s slowest passages—are exciting and action pack. This style isn’t just poetry in prose to me; it is also instruction. I read Malamud to learn how to write.

That was the point of John Keeble’s assignment. In truth, every novel a writer reads he reads in part to learn how to write. Bad novels teaches us what not to do; good novels teach us what to do. But I think it says something about The Natural that, after twenty-five years and at least five readings, I’m still pulling lessons from it. Whether you read it for pleasure, for its thought-provoking themes, or for inspiration on how to write, I recommend you read The Natural.

1 comment on “The American Novel: The Natural by Bernard Malamud”