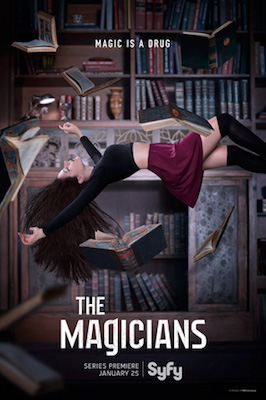 Let’s see if this premise sounds familiar. There’s a secret school where magic is taught. A boy, long feeling an outsider in the real world, learns he has magical powers. He learns of this school and finds himself drafted as one of its students. There he meets a know-it-all witch, who’s shunned by the cool kids. He also meets a snotty wizard who befriends him. But not all is what it seems, because there’s a powerful dark lord who feels himself connected to our boy. This sets up a deadly rivalry between them, and the boy and his friends must join forces to defeat the dark lord. Does this sound familiar? Does it sound derivative? The similarities between the Harry Potter series and the television series The Magicians are so obvious that I found myself wondering if its source, Lev Grossman’s The Magicians (2009), like the Fifty Shades of Grey series, didn’t begin life as fan fiction.

Perhaps that criticism is too dismissive. Unlike E. L. James, Grossman was an established writer prior to writing The Magicians, his third novel. Though there are similarities between Harry Potter and Quintin Coldwater, the protagonist of The Magicians, there is enough to distinguish them to give Coldwater his own story. And though the set up to that story share many features with the Harry Potter stories, the characters are much different than in Harry Potter and the plot takes its own dark turns. So after the initial “I’ve seen this before,” I realized I’m in a new, imaginative story that stands as its own work. Brakebills in upstate New York is a university rather than a boarding school, and we don’t meet Quinton as a boy of 11 but as a young man preparing for college. This allows the series to explore more complex and mature themes, like drug addictions, suicide, rape, sexuality, and depression.

Quintin Coldwater, played by Jason Ralph, had long been fascinated with magic tricks, especially card tricks. He also suffered from depression and a sense of not belonging. His best friend, Julia (Stella Maeve), struggled to break him out of this depression, to bring him into the party, but he preferred to sit alone and re-read a series of youth novels called Fillory and Farther, about a magical land called Fillory and the two kids, Jane and Martin Chatwin, who visited it. Though both Quintin and Julia were tested for admission to Brakebills, only Quintin passed. Rejected from the university, Julia joined a coven of hedge witches, those witches and wizards rejected by the established magical community. This established a subplot conflict between the hedge witches and Brakebills that defined much of the early episodes but vanished—without resolution—in the later episodes. Meanwhile, at Brakebills, Quintin befriended Alice Quinn (Olivia Taylor Dudley), Penny Adiyodi (Arjun Gutpa), and Kady Orloff-Diaz (Jade Tailor). To communicate with Alice’s dead brother, this quartet opened a doorway into another reality. Alice’s brother didn’t pass through this doorway, but something did—the Beast! 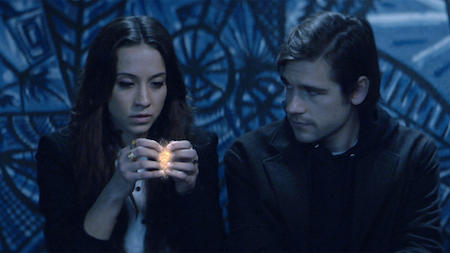 Ralph Jason as Quentin and Stella Maeve as Julia

The Magicians is a Sci-Fi series whose first season is available on Netflix Instant Play. I watched that 13-episode season. I found the main plot, between Quintin and the Beast, interesting and exciting. In reading, we call it a page turning plot, filled with drama and action and violence. No doubt, it’s the plot that kept me watching one episode after the next. But as a thinker, I was more intrigued with Julia’s subplot with the hedge witches, and I find myself disappointed that that plot wasn’t better developed. Even then, Julia has the most dramatic character arc, and the number one thing I look for in television series is character arc. It’s the storytelling element that I like to study and analysis in television series, because television often does arc better than movies or novels. Stella Maeve performed this arc masterfully, and for that reason, I give her the award of best performance in the series.

The violence was vicious and bloody, but at times I felt the action was truncated. I didn’t like the editing of the action sequences in this series. The same applies to the few sex scenes. Perhaps they felt this truncated editing was necessary for the television audience, but since the series was rated TV-MA, I felt they could’ve better developed both the sex and violence. To me, it’s disconcerting when every scene is fully developed and shot in conventional style, but then shift into a different editorial style—music video style—when it comes to sex and violence. The humor in this series was also disconcerting. It was quirky, which didn’t fit the dark tone of the series. In one scene, they had two book, Volume I and Volume II, have sex. It’s like, no! Please don’t. But they did. Such quirky scenes wasn’t their worse foul with it came to humor.  Eliot (Hale Appleman) was an upperclassman who struggled with alcoholism and drug abuse. Though a tragic figure, they often played him for comic relief. Again this was a disconnect to the show’s otherwise serious treatment of its dark themes.

Season 1 ended in a cliffhanger. I felt cheated in that, not because it was a cliffhanger but because there wasn’t enough conflict before the cliffhanger. I knew they were heading for trouble when the last episode of the season began with a voiceover. As a rule, I hate voiceovers and feel they’re overused. They’re intrusive, and they’re a crutch used to make up for limping narration. The dialogue and photography should tell the story, not a narrator. And since voiceover wasn’t used throughout the series, introducing it during the final episode felt false and forced. And when they came to the last ten minutes of the episode, of the season, instead of having Quintin and the Beast battle, they cut to a flashback scene involving Julia. It was an important flashback, but it came so close to the ending that it felt the like the true climax of the season. I knew I wasn’t going to be satisfied with the ending. The climatic battle between Quentin and the Beasts that I’ve been waiting for all season—that as a viewer, I felt I had a right to expect would be dramatic and intense—lasted only a minute or two.

So yes, I feel cheated in the ending, and in feeling cheated in the ending, I feel cheated in the series. Instead of sitting at the edge of my seat in anticipation of season 2, I find myself uninterested in seeing season 2. The Magicians is a television series with potential that it failed to fulfill. Too often its conflict was truncated. Too many subplots vanished without resolution. But the series succeeded in convincing me to read Lev Grossman’s novel. I find myself intrigued enough about the characters and the plot to want to revisit them in the novel. 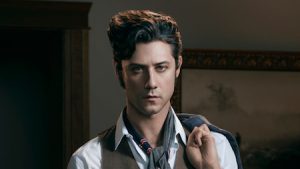