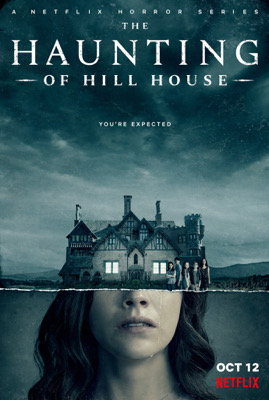 When I sat down to watch The Haunting of Hill House, a Netflix original series, I felt confident I would love it. Shirley Jackson’s novel is my favorite haunted house story. It was faithfully adapted in 1963’s The Haunting, starring Julie Harris as Nell. In 1999, there was a less faithful remake that starred Liv Taylor as Nell. Though I loved the first movie and hated the second one, I still wanted to see what Netflix would do with the story. Long had I felt that a television series–more accurately a miniseries–was a better medium for adapting novels to motion pictures than film. Television, with its multiple-episode structure, was better suited for developing characters, setting, plot points, and themes. I knew Netflix would change it, in order to have multiple seasons, but I expected in this first season, they would stay close to the source.

Boy was I wrong!

The Haunting of Hill House began with a prologue scene that reminded me of something I’ve seen in The Conjuring (2013). It was so close to the scene from The Conjuring that even the setting felt the same. After this scene, the opening credits played. When it came to the writing credits, the show claimed to be “based on” Shirley Jackson’s novel, but when I read that, I shook my head no. I spoke to the television.

“From the opening prologue,” I said, “it’s obvious that you want to capitalize on the title recognition of the novel without really basing your story on it.”

In short, my first thought about the series is that it was a money grab. That first criticism never faded, and after watching all ten episodes, it remains my chief complaint against The Haunting of Hill House. So much better would this series be if they had left Jackson’s novel out of it and created its own story. Yes, it shares character names, plot elements, and the eerie setting of Hill House with the novel, but the plot strayed too far from the source to justify using the same title.

I lay the blame for this on Mike Flanagan, who created and directed the series and who provided much of the writing. I’m disappointed in Flanagan, because in at least two of his previous works–Oculus (2013) and Hush (2016)–he proved himself an original and masterful storyteller. He proved himself a fright-master. His use of visual storytelling is excellent, and he brought that visual expertise to The Haunting of Hill House. He also managed to create compelling, sympathetic characters, whose story I enjoyed watching. If he had given these characters different names and renamed the haunted house, disassociated from Jackson’s novel, I think my criticism would be less severe. But he disappointed me by selling me a television series based on a favorite novel but giving me something different. It’s that old bait-n-switch. No one likes to be victim to it.

Kate Siegel as Theo and Victoria Pedretti as Nell

If from these comments you suspect that I have mixed feelings about The Haunting of Hill House, let me confirm those suspicions. I hated the first two episodes so much that I debated abandoning watching the series. But since I wanted to review it for my readers, I decided to continue watching. The next three episodes roped me in. I thought the series would redeem itself. But the next three episodes again annoyed me. I will say this, though, during them–I won’t be more specific–Flanagan gave me the best jump scare I’ve experienced in years. Perhaps it’s the scariest jump scare of my life. Modern jump scares tend to be cheats; they tend to be added just to shock the audience and have nothing to do with supernatural threats. But this jump scare fit. It fit the plot, it fit the characters, and it fit what was happening in the story at the time. After the disappointing late-middle season, the series redeemed itself in episodes 9 and 10, which brought the story threads to a satisfying conclusion.

The actors did an excellent job in creating their characters. Michael Huisman–top billing–starred as Steven Crain. Elizabeth Reaser, Oliver Jackson-Cohen, Kate Siegel, and Victoria Pedretti starred as his siblings, Shirley, Luke, Theo, and Nell, respectively. Seasoned favorites Carla Gugino and Timothy Hutton starred as their parents, Olivia and Hugh. Henry Thomas starred as a younger Hugh Crain. I give my best actor award to Kate Siegel as Theo. In the novel, in both film adaptations, and now in the television series, Theo was my favorite character. I’ve criticized Flanagan for straying from the source, but the way he strayed with Theo was inventive. It was the second best contribution he made to the story.

The best contribution was the two time-line structure. We followed the Crain family both when the children were young, living in Hill House, and later when they were young adults struggling with realities we all face. The Haunting of Hill House tells us a ghost story through the eyes of those who had survived the haunting but still suffered lingering psychological and emotional effects because of it. I like that. It’s a perspective that I don’t recall every seeing before, at least not so well developed. This approach gives us a family drama with a supernatural bent. It allows Flanagan to explore themes of grief, addiction, mental illness, and sibling rivalry. These themes, as well as several shocking visuals, makes this series unsuitable for young children, but there’s enough meat in it for the mature mind to chew.

It’s my goal in these reviews to answer a question: Should you spend time watching this show? Since my feelings about it is mixed, I don’t know that I have a clear answer for you. Overall I think yes, it’s worth your time. It’s not the approach I wanted Flanagan to take in his adaptation, but there is real drama in this story and there are several real thrills to frighten you. Hill House is both a setting and a character. That was true in Shirley Jackson’s novel and in both film adaptions. It is also true in Netflix’s The Haunting of Hill House. As the character, it’s the main antagonist, and a frightening one at that. That part of the story Flanagan got right. 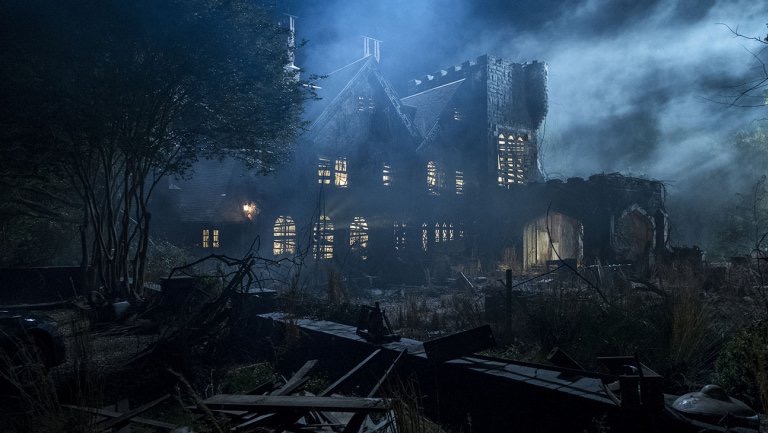