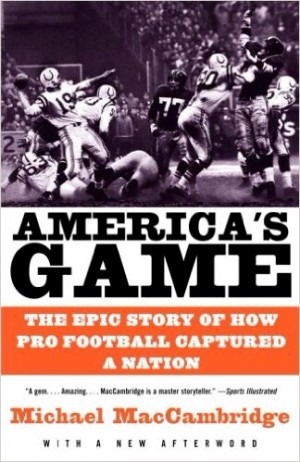 On January 15, 1942, a few weeks after the attack on Pearl Harbor, President Franklin Delano Roosevelt wrote:

I honestly feel that it would be best for the country to keep baseball going. There will be fewer people unemployed and everyone will work longer hours and harder than ever before. And that means that they ought to have a chance for recreation and for taking their minds off their work even more than before. Baseball provides a recreation which does not last over two hours or two and a half, and which can be got for very little cost.

It wasn’t that professional football didn’t exist; the National Football League was founded in 1920, but at the time, it was more a gentleman’s club than a national preoccupation. There were only seven teams, seven owners, and the players worked regular jobs during the week. In contrast, after the September 11, 2001 attacks, President George W. Bush declared Super Bowl XXXVI a National Special Security Event, which placed the Secret Service in charge of the game’s security. How in the course of a little more than five decades did football grow from being a footnote in American sports to justifying presidential protection? That is the question Michael MacCambridge addresses in his tome, America’s Game: The Epic Story of How Pro Football Captured a Nation.

I wanted to read America’s Game, because I often feel left out of football conversations. In my most unpatriotic confession, I must admit I’m ignorant about football. I know the basic rules, and I understand the game objectives. I love watching the games, and I knew the big names—Vince Lambardi, Tom Landry, Joe Montana, etc. But I never paid enough attention to the game to be comfortable in football talk. I had nothing to contribute. I felt outside the football culture, and in modern America, to be outside the football culture is to be outside America culture. By reading America’s Game, I hope to fill in the gap of my knowledge so I could better understand, enjoy, and contribute to football conversations.

MacCambridge begins the story with the 1958 champion game between the New York Giants and the Baltimore Colts and ends it with Janet Jackson’s bare breast at Super Bowl XXXVIII. Though he writes about the back history of the National Football League from its inception to the 1958 game, he identifies the Giants-Colts game as the beginning of football’s ascendency to usurp baseball as America’s most popular spectator sport. The simple and often-repeated cause of this ascendency was that football plays better on television. But MacCambridge is not happy with that simplicity. He recognized that a variety of political, cultural, and social elements coalesced created an opportunity, that visionaries like Bert Bell and Pete Rosette exploited to take their game to the national stage.

Wherever man, or woman for that matter, meet there is politics. Football is no exception. The politics of the NFL proved to be internal, as the teams owners argued about such issues like shared revenues, season schedules, conference and division make-ups, and elections of new commissioners. But the politics was also external, as the NFL faces challenges from junior leagues, anti-trust legislation, and public scandals. As television entered more households, it became the principle source of entertainment and culture for the general public. Football, which arguable does play better on television than baseball, gained an audience. This merged with changes in American society—the emergence of a middle class that had more free time and an insatiable desire for entertainment and excitement—to create both the market and the product to fill it. Football needed a nationwide audience; television networks needed a way to fill their dead zone, Sunday afternoons.

But at the heart of it is the game and the need of the game to stay competitive. The history of professional football in America is the history of the National Football League. MacCambridge takes us into the meetings, the boardrooms, the conventions, the phone calls, and the thinking, as members like Rosette, Bell, Hunt, and Reeves struggle to find ways to keep the teams evenly matched and the games exciting. They instituted programs like the NFL Draft and revenue sharing, so they could fulfill Bert Bell’s prophetic principle: “On any given Sunday, any team in our league can defeat any other team.”

MacCambridge also takes us onto the playing field, as he recaps the games that he believes helped shape the course of pro football. Though some of his narration blogged down in play-by-play details, he has a knack for describing important moments in the gridiron. Several times during his game accounts, I found myself wishing that I had seen this game or that play. I am certain that for many readers, those who had been watching football faithfully for years, these anecdotes will allow them to relive those adventures and emotions they incited.

When I picked up America’s Game, I hoped it would help me fill my knowledge gap when it came to football and its history. Reading the book achieved this and so much more. I find myself thinking about football topics that never concerned me before and following sports talk that in the past would’ve lost me, but I also have a new appreciation for the National Football League. This is an ambitious read, and it was a more detail history than I was seeking, but it was a fun and informative book. I recommend this book for any football fan or any budding football fan.