Sherlock Holmes: The Valley of Fear by Arthur Conan Doyle 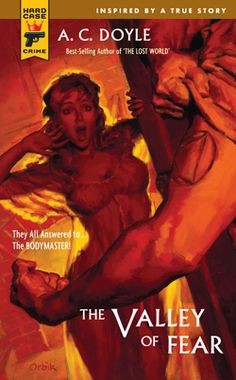 The cover of my Kindle edition of The Valley of Fear is pulp. It shows a scantily clad woman, screaming, as a muscular arm–its hand curled into a fist–threatens her in the foreground. The attacker’s arm is branded with a triangle enclosed in circle. The publisher’s logo appears in the upper left corner: Hard Case Crime. The cover tells us that this novel was Inspired by a True Story and was written by the Best Selling Author of ‘The Lost World’. No word of Sherlock Holmes. In fact, the writer’s name, as if to further distance him from Sherlock Holmes, is truncated to A.C. Doyle.

The Strand first published The Valley of Fear in a serial from September 1914 to May 1915. An American company, George H. Doran Company, first published it in book form in 1915. Doyle, who started writing Sherlock Holmes stories when he was 27, was now 56. He was in his second marriage. His first wife, Mary Louise, had died in 1906, and he married Jean Elizabeth Leckie the following year. He was the father of five children–two by Mary Louise, 3 by Jean Elizabeth. In 1902, King Edward VII knighted Doyle. Doyle had written a pamphlet in support of the Boar War–The War in South Africa: Its Cause and Conduct–and that earned him the knighthood. He also volunteered as a doctor in a field hospital during the war. I prefer to think of this medical service, rather than writing propaganda, is what earned him the knighthood. These days, with Sir Paul McCartney and Dame Judi Dench leading the way, we might assume that Doyle was knighted due to his artistic achievements, especially the creation of Sherlock Holmes, but that wasn’t the case.

About his literary achievements, he had many. In fact, when The Valley of Fear was published, it was his twentieth novel. He had written several historical novels, and with the creation of the Professor Challenger series, he dabbled in what we now call science fiction or fantasy. In 1915, he was as well known as the writer of The Lost World (1912), the first novel featuring Challenger, as he was for his Sherlock Holmes oeuvre. Several times without success, he tried to put Holmes behind him. He wanted to be done writing Sherlock Holmes stories, but like that rash that keeps coming back, so did Holmes. To a friend, he compared writing Sherlock Holmes stories to eating pâté de foie gras. He once ate too much foie gras and became sick, so very word foie gras made him nauseous. (Think how the goose felt!) If we are to take Doyle at his word, he must’ve felt nauseous when he penned The Valley of Fear.

Three centuries had flowed past the old Manor House, centuries of births and of homecomings, of country dances and of the meetings of fox hunters. Strange that now in its old age this dark business should have cast its shadow upon the venerable walls! And yet those strange, peaked roofs and quaint, overhung gables were a fitting covering to grim and terrible intrigue. As I looked at the deep-set windows and the long sweep of the dull-coloured, water-lapped front, I felt that no more fitting scene could be set for such a tragedy.

Doyle based The Valley of Fear on the exploits of Pinkerton detective James McParland’s infiltration of the Molly Maguires in Pennsylvania. Since in structure, it reminds me of A Study in Scarlet, the first Sherlock Holmes novel, it looks backward to the origins of Holmes. In both novels, Doyle presented the crime and its solution in the first half of the novel, and then he wrote the backstory of events leading up to the murder in the second half. These days, a writer would intermix the backstory with the main plot, building tension and mystery, and helping the reader identify with the characters. Since that is what I’m used to, I found Doyle’s separation jotting. In A Study of Scarlet, it felt amateurish. It felt like a clumsy first novel. But in The Valley of Fear, when Doyle was a skilled professional writer, it felt lazy and reluctant. It felt disconnected.

Whether it happened or not, I imagine a scene between Doyle and his editor at The Strand. Doyle says, “I want to write a novel based on the Molly Maguires and their role in labor violence in the Pennsylvanian coal mines.”

And that is how it reads. Doyle wanted to write one novel; the market insisted on another. In truth, you can pull the two halves of the book apart and read them separately and never know you’re reading only half a novel.

But in this novel, Doyle also looks forward at the evolving detective novel and gives us a hint of what’s to come. More than any other Holmes story I’ve read so far, The Valley of Fear reads like a whodunit. When I think about whodunit mysteries, I think Agatha Christie, whose first novel, The Mysterious Affair of Styles, would appear in five years and introduce her fame detective, Hercule Poirot. In this style of detective novel, the writer threads the clues to the mystery throughout the story, so when the detective solves the crime and reveals the clues, all the readers realize the solution was before them all along. You have the suspects, the interviews with the witnesses, and the finally gathering where the detective points his finger to reveal the killer. It’s formula writing at its most refine. Though The Valley of Fear doesn’t contain all the elements of the formula, it does follow the pattern that would define whodunit mysteries for the next hundred years.

It was the fourth of February in the year 1875. It had been a severe winter, and the snow lay deep in the gorges of the Gilmerton Mountains. The steam ploughs had, however, kept the railroad open, and the evening train which connects the long line of coal-mining and iron-working settlements was slowly groaning its way up the steep gradients which lead from Stagville on the plain to Vermissa, the central township which lies at the head of Vermissa Valley. From this point the track sweeps downward to Bartons Crossing, Helmdale, and the purely agricultural county of Merton. It was a single track railroad; but at every siding— and they were numerous— long lines of trucks piled with coal and iron ore told of the hidden wealth which had brought a rude population and a bustling life to this most desolate corner of the United States of America.

The Valley of Fear is a mediocre novel by writer who is capable of better. It is a short novel, and easy to read–the easiest to read of all the Sherlock Holmes books I’ve read so far. Though it is entertaining, I believe the number one reason to read it is scholarly rather than entertainment. If, like me, you’re doing a survey of Doyle’s Holmes canon, this novel is one stop on that journey. It is also important for its place in the detective or crime genre. When Doyle first began writing Sherlock Holmes stories, crime fiction was in its infancy. Crime fiction grew up with Holmes, passing through its childhood and its teen years. With The Valley of Fear, it enters that awkward late teens, early twenties age, when it needs to decide exactly what it means to be an adult. If my analogy is clumsy, it still characterize The Valley of Fear as a transitionary work. Like Janus, it looks both backwards and forwards, reminds us of crime fiction’s humble beginning and it gives us a taste of things to come.