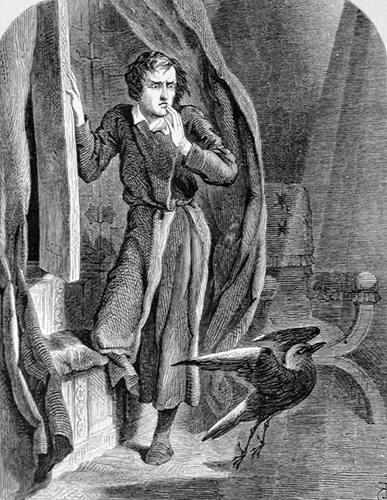 Once upon a midnight dreary, while I pondered, weak and weary/Over many a quaint and curious volume of forgotten lore—so reads, arguably, the most famous couplet in American poetry. It’s surely is the most famous quotation in Edgar Allan Poe’s oeuvre. One doesn’t have to be a literary scholar to recognize it and know that it comes from “The Raven.” Though published late in his life, in 1845, it became his most popular work during his life. First published in the New York Evening Mirror it was reprinted several times in other periodicals. It inspired many parodies and illustrations. It increased his fame, making him a celebrity, but he made little money from it. He had sold the poem for only $9.

“The Raven” is a narrative poem. It describes a midnight visit of a raven to the parlor of an unnamed narrator. The events are straightforward. The raven comes, says something the narrator hated to hear and stays to repeat it. “Nevermore.” The narrator accuses the raven of being a prophet and a demon, but the bird, whether real or imagined, is an embodiment of the narrator’s angst. Even before he opens the window to allow the raven in, he tells us that he’s in sorrow.

Eagerly I wished the morrow;—vainly I had sought to borrow

From my books surcease of sorrow—sorrow for the lost Lenore—

For the rare and radiant maiden whom the angels named Lenore—

Though a narrative poem, the real movement or arc isn’t physical but psychological. “The Raven” explores the narrator’s grief over the lost Lenore. Why is she lost? Did she break up with him? Move away? Die? The poem doesn’t make it explicit, but I have always assumed that Lenore had died. Her departure feels permanent—Nevermore!—and what besides death would make it so? Whether real or metaphorically, she’s clearly dead to the narrator, but he longs for her still. “The Raven” is a contest between reality and fantasy, between truth and desire, between sanity and madness. It begins with the tangible and everyday books that surround him, but it ends with the raven—still is sitting, still is sitting/On the pallid bust of Pallas above my chamber door.

When I was studying literature in college, one of my favorite class was Introduction to Poetry. The textbook was Western Wind: An Introduction to Poetry by John Frederick Nims. I still own this book—somewhat tattered from frequent use. It’s my favorite book for understanding poetry, but not just poetry but all literature, and not only as a reader but also as a writer. I mentioned it here because the first chapter isn’t an overview of poetic history—as you might expect—or even an examination of what poetry is—as you might want. The first chapter is entitled, “Where Experience Starts: The Image.”

In literature, the image is anything that evokes a sensory experience—the taste of wine, the scent of a rose, a lover’s caress, the sound of a distant flute, or the sight of a beautiful scene. We have five senses that ground us in reality and provide contexts to our experiences. Thoughts and emotions are part of that experience. That’s genius behind “The Raven.” Poe wrote a very emotional, a very psychological poem, but he planted the abstractions—grief, sorrow, madness—into a setting we all can experience.

Open here I flung the shutter, when, with many a flirt and flutter,

In there stepped a stately Raven of the saintly days of yore.

Not the least obeisance made he; not a minute stopped or stayed he,

But, with mien of lord or lady, perched above my chamber door—

Perched upon a bust of Pallas just above my chamber door—

Perched, and sat, and nothing more.

From the first line—a midnight dreary—to the final image—his shadow on the floor—we know where we are and when we are. It feels familiar, doesn’t it? Haven’t we all done the late night? Haven’t we stayed up past our bedtime, sat in our easy chair, nearly napping? These days it’s probably more from binge-watching some Netflix series than from reading, but we still know the feeling. And no doubt, we’ve all been startled awake by that unexpected sound. A car passing outside. The phone ringing. A knock on the door. Of all those, that knock is the most frightening. Who knocks at midnight? Poe grounds us in the familiar, the everyday, but he carries us into the macabre, the mystical, the insane.

“The Raven” deserves its place as one of the most recognizable poems in American literature. It is dark and brooding, mysterious and symbolic. If you have never read it, I suggest you do so. And if you have read it, reread it. It’s one of those pieces that the reader can also find something fresh in, something undiscovered, unnoticed, and worthy of appreciation.