Poe: The Masque of the Red Death

Home / Poe: The Masque of the Red Death 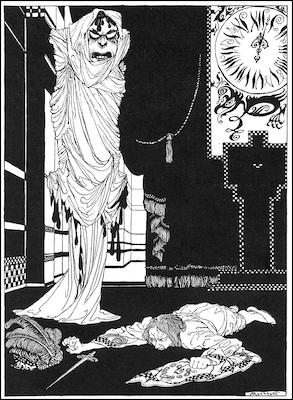 “The Masque of the Red Death” reads like a fable. One could imagine it beginning with the stock line, Once upon a time… It’s loaded with irony, symbolism, and poetic justice; in fact, I think it’s Poe’s most ironic story. It reminds us that, in the end, death comes for us all.

As the plague known as the Red Death ravished his land, Prince Prospero retreated to a castellated abbey with a thousand of his courtiers. After they welded the iron gate close, they planned on waiting out the plague in this retreat. There were food and drink, musicians and other entertainers, and, no doubt, a myriad of pastimes. One of those pastimes was the titular masquerade. I won’t tell you what happens; I suppose you can surmise from the title. There’s no shocker in this story, no thrilling turns, no surprise ending. The beauty of “The Masque of the Red Death” lies in how it carries us to the inevitable climax.

When he first published it in Graham’s Lady’s and Gentleman’s Magaine, Poe added a subtitle, “A Fantasy.” In that publication, he had titled it “The Mask of the Red Death.” But in 1845, when he owned the Broadway Journal, Poe reprinted the story under the current title. It’s a small change but significant. What is the real horror in this story? The masked figure who appears at the end? Or Prospero and his courtiers who believed their privileged status should immune them from the hardships suffered by his subjects? The masquerade ball becomes a symbol of that denial and neglect.

The “Red Death” had long devastated the country. No pestilence had ever been so fatal, or so hideous. Blood was its Avatar and its seal—the redness and the horror of blood. There were sharp pains, and sudden dizziness, and then profuse bleeding at the pores, with dissolution. The scarlet stains upon the body and especially upon the face of the victim, were the pest ban which shut him out from the aid and from the sympathy of his fellow-men. And the whole seizure, progress, and termination of the disease, were the incidents of half an hour.

“The Masque of the Red Death” is not only one of my favorite short stories by Edgar Allan Poe, but also it’s one of my favorite stories by all writers. If I were to make a list of my favorite hundred stories, several of Poe’s stories would appear near the top. His “The Fall of the House of Usher” would be the top story, but “The Masque of the Red Death” wouldn’t be far down the list. Though I have no such list, if I did, it’s safe to say that this story would be in the top ten. 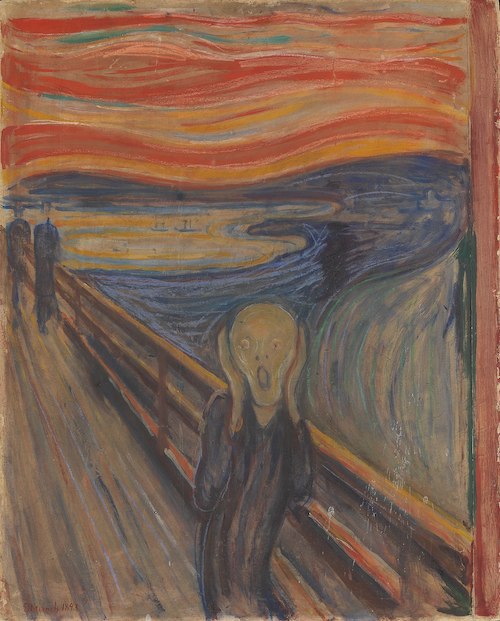 In his essays and criticism, Poe wrote about a concept he called unity. Though I suspect my understanding of Poe’s unity is imperfect, I’ll share it with you. A piece of art—in this case, a short story—contains every element it needs to work and nothing superfluous. In a short story, every word, every sentence, every description, every expositional passage, every scene, and every character must work together to create a unifying effect. A beautiful example of unity in the visual arts is Edvard Munch’s The Scream. Whether you like this painting or not, it affects you emotionally. Everything in the picture, from its impressional protagonist to his pose to the conflict between the warm and cool pallet works to create the power of his scream. We feel his angst.

“The Masque of the Red Death” enjoys the same unity of effect; in fact, I believe this is the story where Poe’s best illustrated what he had meant by unity. It’s a tight story, short even by Poe’s standards. He begins with an expositional paragraph about the Red Death (shared above). In the second paragraph, he introduces Prospero and his courtiers and tells us about the abbey and its iron gate. The masked ball begins in the third paragraph.

It was towards the close of the fifth or sixth month of his seclusion, and while the pestilence raged most furiously aboard, that the Prince Prospero entertained his thousand friends at a masked ball of the most unusual magnificence.

Most of the story that follows is a detailed description of the compartments or suite where Prospero hosted this ball. Since Poe rarely spends so much time describing a setting, we must wonder why he did so here. The passage is full of symbolism and allusions, and it helps to establish both the mood and theme. But I think this is less a description of a setting and more a description of Prospero. Poe never describes the protagonist. Is he young or old? Fat or skinny? Hairy or bald? Though we’ve never given a physical description of him, in the twist and turns of his suite, in the conflict of colors of different chambers, and in the “grotesque” statues that decorate them, we sense the prince’s dark character.

To and fro in the seven chambers there stalked, in fact, a multitude of dreams. And these—the dreams—withered in and about, taking hue from the rooms, and causing the wild music of the orchestra to seem as the echo of their steps. And, anon, there strikes the ebony clock which stands in the hall of the velvet. And then, for a moment, all is still, and all is silent save the voice of the clock. The dreams are stiff-frozen as they stand.

Description, yes, but also a sense of dread. There’s movement. Something wicked this way comes, and everyone at the masquerade knows it. When the clock sounds the hour, they stop dancing and listen to its echoes through the chambers. This is a countdown. It’s the timer on a bomb destined to explode. When the Red Death arrives—as we knew it would—the revelers are startled and frightened, but perhaps not surprised. Prospero—the royal denier—is both terrified and enraged. “Who dares…who dares insult us with this blasphemous mockery?” He wants to hang death, but of course, we cannot hang death. Death hangs us.

“The Masque of the Red Death” has only one scene, and that’s its climax. It has a clear protagonist with a well-establish and understandable goal—to avoid the Red Death—and it has a clear antagonist to oppose that goal—the Red Death itself. They meet with predictable consequences. But are they two separate characters? I go back to Poe’s first characterization of this story—“A Fantasy”—and wonder what he meant by that. Many of Poe’s stories can be characterized as fantasy fiction. Many modern horror writers prefer the term dark fantasy to horror, and Poe’s stories fit that idea. This story feels allegorical. Prospero is the Red Death. In his selfish, self-serving neglect of his lands, the people suffer and die. He cannot escape the Red Death because he carries it with him.