Poe: The Fall of the House of Usher

Home / Poe: The Fall of the House of Usher 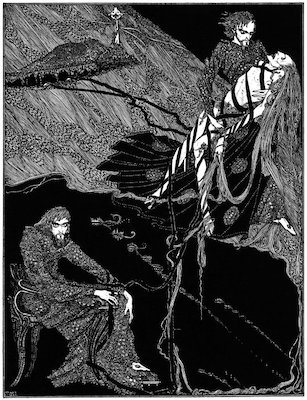 Several times in this survey of Edgar Allan Poe, I alluded to a nonexistent list of my favorite short stories. The list doesn’t exist, because how can it? I’m distrustful of claims of favorites. Such claims seem, at best, fluid, and, at worst, fraudulent. Fraudulent perhaps is too harsh a word, too judgmental. But whenever someone tells me their favorite movie, book, artist, song, or whatever, I can’t help dismissing the claim as hyperbolic. I do not have a list of favorite stories, because maintaining such a list would take too much time. It would always be in flux, as I read new stories or reevaluate familiar ones. So I’m not going to tell you that Edgar Allan Poe’s “The Fall of the House of Usher” is my favorite short story. But I will tell you this: “The Fall of the House of Usher” is the short story that I have read most often in my life.

Poe first published it in the September 1839 issue of Burton’s Gentleman’s Magazine. A year later, he included it in his Tales of the Grotesque and Arabesque. What Poe called Grotesque and Arabesque, everyone else called gothic. It’s one of the finest gothic tales written by anyone, and that’s a tradition that includes such masterpieces as Mary Shelley’s Frankenstein, Bram Stoker’s Dracula, Nathanial Hawthorne’s “Young Goodman Brown,” and Emily Brontë’s Wuthering Heights. If you’re interested in reading gothic literature but don’t know where to start, Poe’s “The Fall of the House of Usher” is a reasonable choice.

During the whole of a dull, dark, and soundless day in the autumn of the year, when the clouds hung oppressively low in the heavens, I had been passing alone, on horseback, through a singularly dreary tract of country, and at length found myself, as the shades of the evening drew on, within view of the melancholy House of Usher. I know not how it was—but, with the first glimpse of the building, a sense of insufferable gloom prevailed my spirit.

The narrator, who never tells us his name, traveled a great distance to visit his suffering friend, Roderick Usher. Usher had summoned his friend because he’s suffering a malady of the mind and hoped his friend would cheer him up. Once in the House of Usher, the narrator felt oppressed by the despair that formed the very atmosphere around the house. Battling that, Usher and the narrator spent their days playing music, reciting poetry, and talking philosophy. The narrator had the advantage of seeing Roderick’s sister, Madeline, once, before she died. She suffered the same malady as her brother, only more advance. After her death—arguably before it—the story becomes a classic haunted house story.

Madness is the story’s theme. These days, we are more likely to use the politically correct term mental illness or the more specific term depression. I’m not sure if depression was known to be a disease in Poe’s time, but as you read a list of Usher’s symptoms, a diagnosis of depression seems evident. Poe offers no word to tells what, exactly, Usher and his sister suffer from, but it’s obvious they both suffer despair. Despair seemed to exist in the very stonework of the house and the surrounding environment, with its clouds hanging “oppressively low” and with the “lurid tarn” and its eerie reflection of the house. From the first sentence to the final sentence, there is no hope to be found in this story. The very title—“The Fall of the House of Usher”—tells us its fateful ending.

Except for a couple of servants and a shady doctor, the story has only three characters. Though Roderick Usher is the central character, his sister—seen only a couple times in the story, and who never speaks—is the most important. She’s the key to the story. Even in life, she’s the ghost that haunts the palace. As a character, she’s a familiar archetype in gothic literature—the virgin. Often the virgin is the one endangered by the horror, but in “The Fall of the House of Usher,” Madeline is the embodiment of the horror. The unknown malady led to her death, and Roderick knew it was only time before he followed her into the tomb. And after the interment, she became the instrument of the fall.

While he spoke, the lady Madeline (for so was she called) passed through a remote portion of the apartment, and, without having noticed my presence, disappeared. I regarded her with an utter astonishment not unmingled with dread; and yet I found it impossible to account fro such feelings. A sensation of stupor oppressed me as my eyes followed her retreating steps. When a door, at length, closed upon her, my glance sought instinctively and eagerly the countenance of the brother; but he had buried his face in his hands, and I could only perceive that a far more than ordinary wanness had overspread the emaciated fingers through which trickled many passionate tears.

It’s neither plot nor character development that keeps me coming back to this story. Nor is it the theme. It’s the setting, but not the setting in itself but the atmosphere that surrounds it. Usually, when I read a story and imagine it visually, I imagine color. But “The Fall of the House of Usher” inspires black-and-white images, gray tones. It invokes darkness and fog. Away from Usher’s manor, the sky is blue, the grass is green, and the children know laughter. But around the house, everything becomes murky. It’s as if the house and its doomed residents vacuum light, joy, and color from the immediate environment. These are my words, not Poe’s, but he invokes this atmosphere. Poe believed a short story should strive for a “unity of effect.” The unity in “The Fall of the House of Usher” is dread.

“The Fall of the House of Usher” is Poe’s most complex and layered story. As such, I think it’s less assessable to the casual reader than, say, “The Tell-Tale Heart” or “The Masque of the Red Death.” You can enjoy the story as a simple haunted house story, but it will inspire you to dig deeper. I’ve been digging deeper for four decades, yet I have yet to mind all the gold in “The Fall of the House of Usher.” This story is Edgar Allan Poe at his finest. It is his masterpiece.