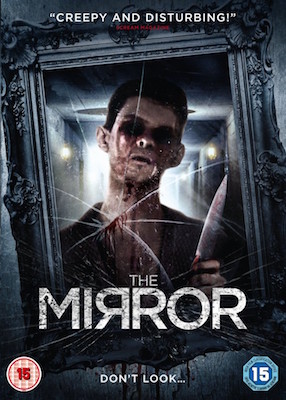 When three roommates decide to compete to win a prize for proving a supernatural event, they purchased a cursed mirror on eBay and hang it in their living room. Armed with movie and video cameras, they set up round-the-clock video surveillance. It is a case of being careful of what you wish for, because the supernatural does invade their lives.

The Mirror, written and directed by Edward Boase and released in 2014, is another entry in the already tired and oversaturated found footage genre. Every since the success of The Blair Witch Project in 1999, aspiring filmmakers had used found footage as their debut projects. It’s cheap and easy too make. Expenses are limited, because most have only three to seven actors, and because they are filmed in the woods or at one location. But Blair Witch was effective because it had never been done before. Even the sequel to Blair Witch couldn’t duplicate its effectiveness. For that reason, I believe found footage films usually fail. I tend not to watch them. If I start a movie and it proves to be found footage, I usually turn it off and watch something else.

But I persevered through The Mirror.  I was in a quirky mood where I wanted to see a bad movie. I get in that mood sometimes. Watch a bad movie, make up my own lines, sassy comebacks to their stupid dialogue, and yell insults at the stupid plot points. Since most horror movies are bad movies, they are fodder for this abuse. And found footage movies in particular are apt for it, because–let’s face it!–at some point in time, faced with the horrors seen through the viewfinder, a sane person would throw the camera down and run for his life. Not in found footage movies. They keep filming no matter what they see.

But The Mirror, though not a great movie, is a better found footage movie than most. They solved the keep-filming-no-matter-what problem by attaching a Go Pro camera to one of the roommates, Matt, who proved susceptible to the mirror’s curse. This allowed for a few spooky scenes that otherwise wouldn’t have existed. The acting was believable. Jemma Dallender, Joshua Dickinson, and Nate Fallows play the roommates. I wish I could tell you something more about these characters, but one weakness of found footage movies is the absence of character development. That creates a disconnect, a lack of empathy, between the characters on the screen and the audience. Filmmakers believe raw emotions, caught on film, will inspire this empathy, but they are wrong. Found footage always leaves me wanting; it leaves me dissatisfied.

Verdict: Watch at your own risk. 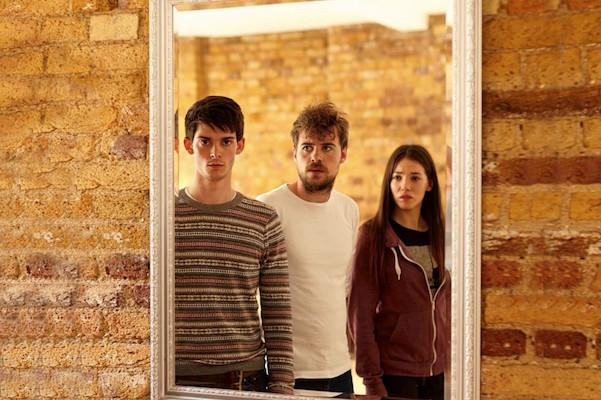 Joshua Dickinson, Nate Fallows, and Jemma Dallender in The Mirror