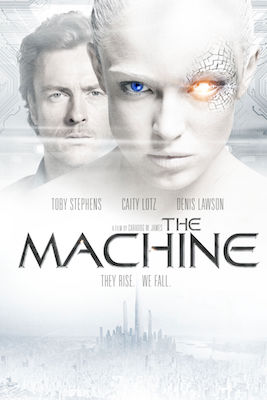 Every since Mary Shelley penned Frankenstein, writers and moviemakers explored the idea of humans creating another humanoid life form. Many of the movies inspired by this theme are works of genius. I’m thinking Ridley Scott’s Blade Runner (1982) or Chris Columbus’ Bicentennial Man (1999). These movies allow us to explore questions like: What does it mean to be human? What is life? They also explore ethical questions: Should we dabble in these experiments? What is our role or responsibility to such creations? Once we created humanoid life, do we have the right to destroy it? Or enslave it? The pious might see such stories as religious allegories, a means to explore man’s relationship with god. This is a diverse theme that generates questions with no definitive answers. Hence it is a theme that will continue to generate hundreds of novels, stories, and films.

Caradog W. James’ The Machine  is one version of this theme. Written and directed by James, it is a British film released in 2013. It stars Toby Stephens as Vincent McCarthy, a scientist working in robotics and artificial intelligence. It also stars Caity Lotz as The Machine. Denis Lawson plays Thomson, the film’s antagonist, and Pooneh Hajimohammadi, plays Suri, his henchman. (Henchwoman? Henchperson? Do we need to be PC when talking about villains?) In truth, I felt more interested in Suri than any other character in the movie. Villains are often the most intriguing characters, but lack of information about her drives my interest in her. She’s a blank slate. We know nothing about her or her motivation. But man! Is she a dark, murderous bitch!

The writing is the weakest element in this movie. The story has subplots that are never developed and distract us from this main plot, creating confusion and chaos. Since this is set in a dystopian future, this confusion helped set the tone, but I’m not convinced it was intended. The driving force of the movie was McCarthy’s relationship with Machine, but that relationship was underdeveloped. I think James would’ve done well to cut the subplots to focus better on this relationship.

But the photography is beautiful; the visuals are great. There is one scene where Machine performs a dance as her skin flashes colorful lights. It’s beautiful. But it also demonstrates she appreciates aesthetics–a human quality. The movie was shot with cool tones (blue tint), and this created an eerie atmosphere that complimented the movie’s dark plot.

The performances were believable, especially Stephens as McCarthy. He’s a man trapped in a dilemma of his own making. And Machine, self-aware of her creation, struggles with what it means to be an artificial life. Lotz, who performed her own stunts, developed a character arc from naive android to sentient being. I craved to see more of this character arc, but those pesky subplots got in the way.

Like all the movies in the Netflix Now series, The Machine is available on Netflix Instant Play. Though I believe the screenplay needed a couple more revisions before shooting, it does explore those dark, thought-provoking questions I mentioned in my introduction. Not as good as other movies in the same ilk, it is entertaining and beautifully photographed.