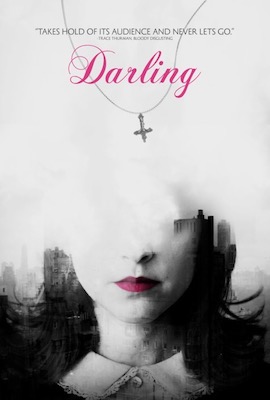 Last Sunday, in the mood for a scary and disturbing movie, I searched Netflix Instant Play and discovered Darling. Though the short synopsis made me think it was going to be just another haunted house story, I decided to watch it. Instead of being another haunted house tale, Darling proved to be psychological horror story that satisfied my yearning for something scaring and disturbing.

Written and directed by Mickey Keating, this 2015 film stars Lauren Ashley Carter as Darling. Hired to housesit an old mansion, Darling explores the manse and discovered horror house clichés scattered throughout. In a drawer in her bedroom, she found a cross designed to hang upside-down on a chain. Down a narrow hallway, she found the locked room. The owner of the house had assured her that it—being the “oldest house in the city”—has its share of ghost stories. The year before, another house sitter threw herself from the balcony on the roof. So Darling begins as your run-of-the-mill haunted house tale, but not long after the beginning, we realized that Darling had brought her own horror to the house. We realize that Darling herself, in a very real sense, is the ghost that haunts these rooms.

The best thing about Darling is the cinematography. Mac Fisken shot in black-and-white, and he brought to the film an artistic knack for composition, lighting, and framing. This added to the spooky mood that gives this movie its tension. The worst thing about this movie is the editing, which, during the film’s most intense moments, took this beautiful photography and sliced it up into bite-size increments to create flashing montages. Disconcerting music played. Between the flashing shots and screaming music, we know we’re supposed to be scare. But are we? I found myself more scared when the filmmakers allowed the shots to tell the story. I think in these jarring montages, Keating was trying to give us a sense of Darling’s inner world, but for me that failed. I think I had a better sense of her inner world in those scenes and shots where she interacted with the world, the house, and other people. 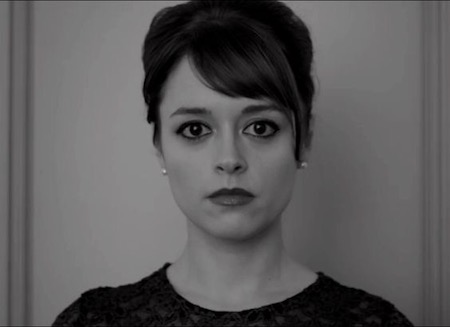 For the most part, I considered Carter’s performance convincing, but in places, I fear she overacted. I wonder if that is also on Keating. It felt like during some scenes, he encouraged her to make exaggerated faces. Again the goal was to show us a tormented woman, but the effect was more comical than horrifying. They had the right idea, but took it too far. Brian Morvant played “the man,” and Sean Young (remember her from Blade Runner?) played the homeowner. There were a few extras, but those three actors make up the main cast. I like movies with small casts, because it heightens the drama. The best scenes in Darling was the scenes between Darling and “the man.” From these scenes, we realize this is a psychological horror story rather than a ghost story.

Mickey Keating, the writer and director, is a fresh face in filmmaking. From what I can tell on IMDB, this seems to be only his third full-length film. He clearly has talent and imagination, and I’m looking forward to seeing his other films. But I feel he’s still learning the craft, and the blunders with the editing and the overacting proves it. I think the best tension came from the more subtle effects and shots, and from the enigma of Darling’s psychology. Darling left some question unanswered, and though I don’t mind that, I believe knowing more about Darling would’ve benefited this film. We have a hint of her backstory, but not enough to put her conflicts into context. For the reason, I think the screenplay could’ve used a few more rewrites to better develop Darling as a character.

Darling is a good movie with a few noteworthy but forgivable flaws. Despite these flaws, I enjoyed it, and I know it sated my desire for a creepy film.