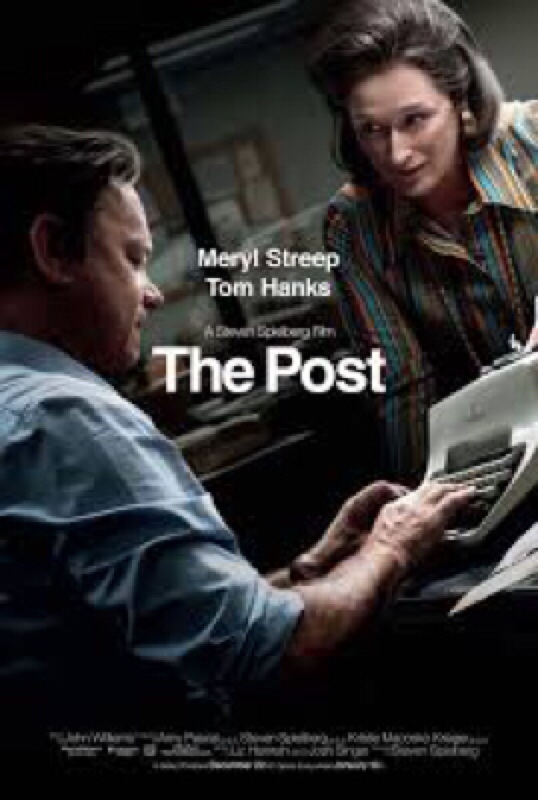 Tom Hanks! Meryl Streep! Steven Spielberg directing! A political drama in the Age of Trump the reminds us of the importance of Freedom of the Press and the duty for news organizations to make public what the government wants kept secret! I went to The Post with high expectations. I didn’t expect a good movie; I expected a GREAT ONE. I worry about such elevated expectations, because the higher the expectation, the farther the fall if disappointed. But The Post didn’t disappoint. It not only delivered on my expectations, but also it exceeded them. It was the first movie I’ve seen in 2018, but as I was leaving the theater, I thought: Best picture! Guaranteed!

Yes. But if there’s even one movie released in 2018 that’s better than The Post, then this is going to be a great, great year in film. It’ll be the type of year that could create a second Golden Age for Hollywood. In fact, I think The Post by itself might accomplish that. From Logan to Wonder Woman, from Spider-Man: Homecoming to Thor: Ragnarok, 2017 was a great year for superhero movies, but my survey of upcoming 2018 movies suggests it’ll be the Year of Drama. Last year this time, I was anticipating those superhero thrillers, but this year, it’s the simple drama I’m anticipating. That began with The Post.

Maybe it’s not Hollywood that’s changing, or even public demand, but me. After the high octane action of superhero films, along with the great science fiction 2017 gave us, I’m in the mood for something calmer, more realistic, more familiar to the world I live in. I think about Greek theater–three actors, no gesturing, no movement, just three people standing on stage, holding masks over their faces to represent the characters they’re playing. Compared to what can be achieved in film, or even on the modern stage, it sounds sedate, even boring, but there’s also a purity in it that can’t be denied. What else do we need besides the human voice to fill a moment with pathos?

I say pathos because what surprised me about The Post wasn’t the acting or the story or the attention to details that reconstructed the 1970s. What surprised me was the emotions. The Post was a much more emotional film than I expected. I teared up several times. But it wasn’t just tears I felt. I felt a panoply of emotions, from sadness to dread, from anger to hope, form defeat to triumph. Tom Hanks as Ben Bradlee, the Post’s editor, gave a tirade about separating personal friendships with government officials from the responsibility to report on their actions, and I think: That’s it! That’s the moment this movie was meant to give us! But I was wrong. Powerful speech, yes, but not the moment of the film, because that moment came a few scenes later, when Meryl Streep as Kay Graham, the publisher, had to decide whether to publish the Pentagon Papers or not. She had everything to lose by publishing them, and little to gain. Though history tells us what choice she made, I held my breath to hear it. Everyone in the theater–more crowded than early morning showings are wont to be–held their breaths. And when she made the decision, the applause sounded!

Just thinking about that moment is bringing the tears back to my eyes. 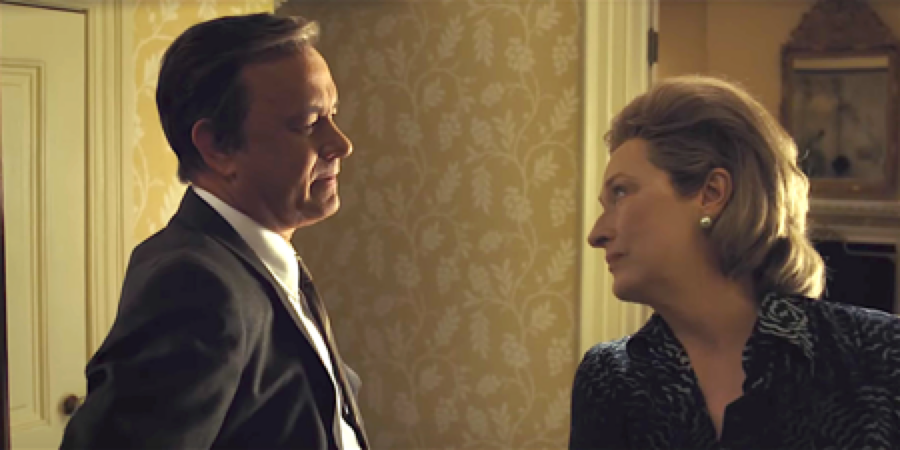 The decision to publish the Pentagon Papers is the central conflict of The Post. It’s a conflict complicated by legal action, financial concerns, and personal friendships, and these subplots entwined to make The Post a tense, dramatic tale. It’s a political tale, but it’s also a personal tale about those involved in the decision. It humanizes them. It’s allows us to see their actions as brave, even heroic, but without glorifying them. These are real people, flawed, but caught in the crux of history. The most compelling conflict isn’t good versus evil; it’s good versus good. And the most compelling drama are those where there are no bad guys, just good guys who disagree. This is the type of story The Post tells. The film doesn’t even vilify Robert McNamara (Bruce Greenwood), Secretary of Defense under Kennedy and Johnson. Richard Nixon comes out as a jerk, but it’s not the movie that condemns him. It’s his own words.

There are themes aplenty to pull from The Post. There’s the obvious theme of Freedom of Press versus government secrecy. There’s the theme of government corruption. But there’s also a feminist theme I wasn’t expecting. Kay Graham, who inherited her position from her husband, had to prove that a woman could run a newspaper. It would be a interesting and relevant theme today, but back in the 1970s, this made her a trailblazer.

For the moment I described above, I award Meryl Streep best actor, but Tom Hanks deserves an honorable mention. Both had given us great performances over the years, but this is the first movie they’ve done together. About time! As for Streep, this is her finest performance. I’ve never seen her as anything but great, but Kay Graham is her at the top of her game. As with any historical drama, there’s too many characters and actors to name, but I wanted to give a shout out to Bob Odenkirk as Ben Bagdikian. I’ve enjoyed Odenkirk in Breaking Bad and Better Call Saul, so it was fun seeing him in a different role.

There are two types of movies that I believe deserve to be seen the first time in the theater. The first is the action-packed, special-effects-laden films like the superhero movies I mentioned earlier; the second are the movies where the audience reaction will enhance your appreciation of the movie. The Post belongs to this second category. The audience cheering and applauding at key moments helped me feel those moments. After the movie, as we filtered out of the theater, I heard a fellow audience member telling one of the theater’s young employees that this was a great movie, good acting, good drama. Like most at the show, he was my age, maybe a few years older, and maybe this is a movie that appeals to only the older generation. I hope not. I hope the younger generation are also drawn to it. It’s themes are relevant, not only in the Age of Trump, but also in the Ages of Obama and Bush and Clinton and that other Bush. It’s a film to remind us that any trust we give those in power should be a guarded trust, and that’s a message for all ages. 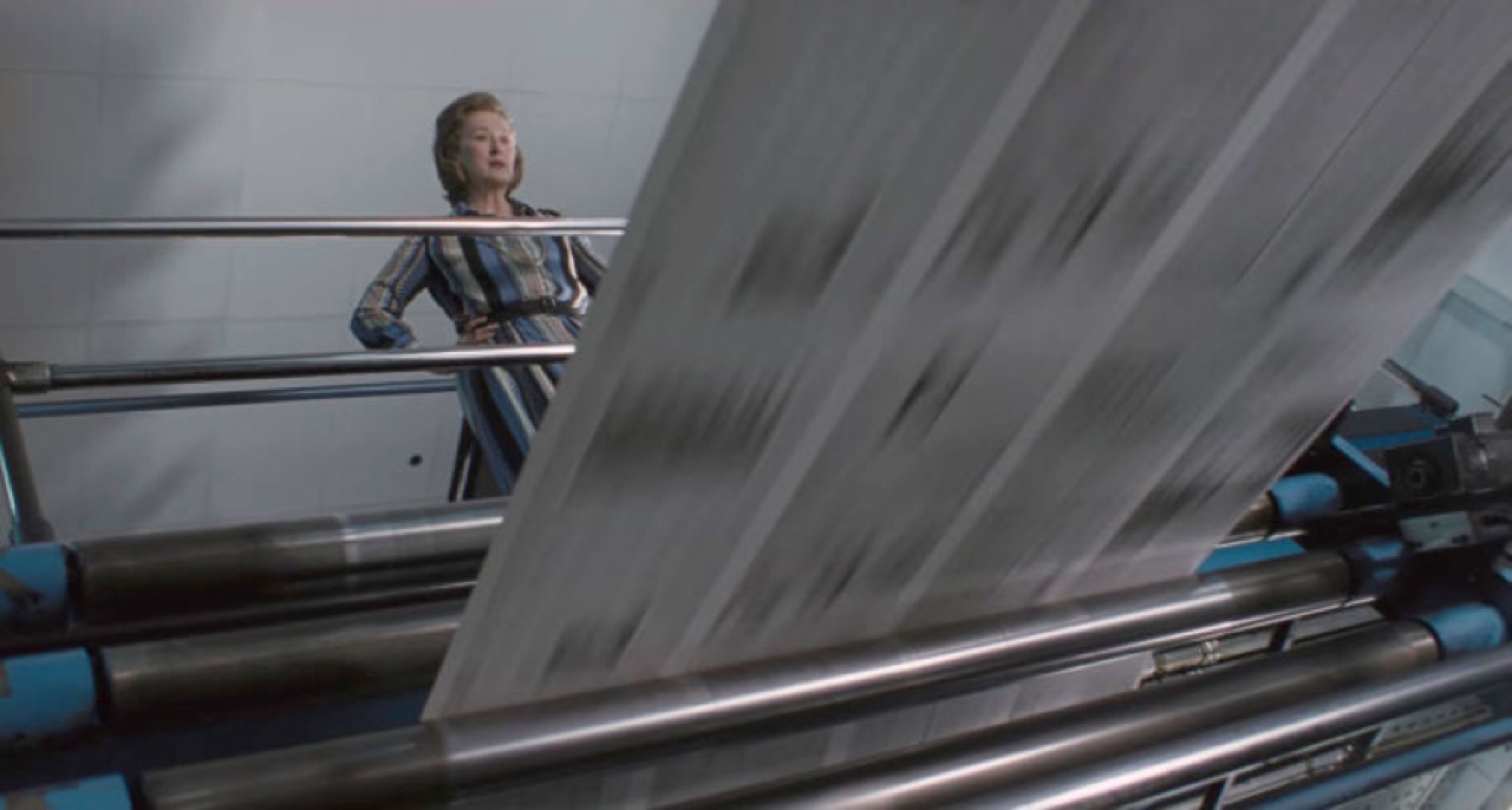