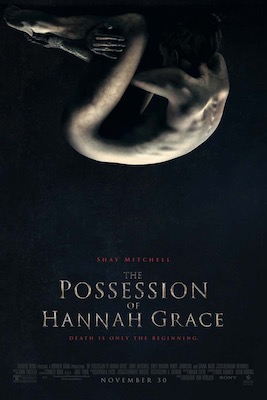 As the title suggests, The Possession of Hannah Grace is about demonic possession, but its plot is better described as a ghost story. Yet it includes vampiric elements. The hybrid nature of the monster suggests to me that it started life as three screenplays that were merged into one. Though such things happen in Hollywood, I can’t say with certainty that it happened here, but if so, it wasn’t the right strategy for this movie. The Possession of Hannah Grace achieved the paradox of being imaginative without being original. It’s an average film (3 Stars), entertaining for its duration, but as I left the theater, I wish I had waited for home-viewing to see it.

The Possession of Hannah Grace began strong with an exorcism scene gone awry. As I watched it, I sat back in my seat–they recline at the theater I go to–and settled in for what I anticipated would be a superior movie-going experience. Problem was: that exorcism scene proved to be the best scene in the movie. What does it say about a film when the prologue is its biggest strength? It’s not that the rest of the movie was horrible–nothing in the movie was horrible–not even the monster, unfortunately, if you forgive me the pun–but nothing lived up to the promise of that prologue.

Kirby Johnson played Hannah Grace. Shay Mitchell starred as Megan Reed, the protagonist. In the tradition of modern horror-movie protagonists, she’s going through personal issues. A former police officer, she’s suffering grief and guilt over the shooting death of her partner, because she felt she could’ve, should’ve prevented it. She’s breaking up with her lover (Grey Damon); she’s recovering from drug and alcohol addiction. Her recovery sponsor (Stana Katic) got her a job at a hospital morgue, where Megan encountered the supposedly dead Hannah Grace. There were a lot of side characters, but the gist of the conflict was between Hannah and Megan. I suppose the demonic possession serves as an analogy for Megan’s mental state, but the screenplay by Todd Garner and Sean Robins failed to develop that analogy.

Diederik Van Rooijen directed The Possession of Hannah Grace. I’ve never heard of him, and my research into him recovered little information. According to his IMDB profile, he was born in The Netherlands but grew up in Greece and the United States. Most of his past work seemed to be in television and commercials. This feels like a project meant to kickstart his career in feature films; in fact, it feels like a movie to kickstart a lot of careers, including Shay Mitchell’s. It’s competent enough to do the job. It’s a decent entry-level film. Unremarkable, forgettable, but I’m sure it’ll make money and open doors for those involved. I’ll be curious to see what Van Rooijen and Mitchell do next. I’ll give Mitchell my award for best actor, but since this was, essentially, a vehicle for her future stardom, that’s a default award. There wasn’t enough work for the other actors to challenge her claim.

Lennert Hillege was the cinematographer. As I so often do, I loved the photography in the film. My favorite shots where the shots of the morgue, especially the hallway between the various rooms. Hillege’s photography made this everyday location eerie. Stanley Kolk and Jake York edited the movie. For the most part, they did a good job in telling the story, but in one scene–the weakest scene–they adapted the fast cuts of MTV music videos. They ruined the very scene that might’ve made the movie memorable, the scene that might’ve elevated this movie from commonplace to the most frightening movie of the year. It felt like a boxer pulling a punch.

If you like horror movies and want to see all you can–I’m like that–then you’ll want to see The Possession of Hannah Grace. It has enough spooky elements to justify its inclusion to the genre. For me, going to the movies is an event–even though I do it every week–and I want the movies I see at the theater to justify the event. The Possession of Hannah Grace failed that test. I enjoyed it, but not enough to justify the ticket price and the purchase of concessions. It’s a good movie for home-viewing.