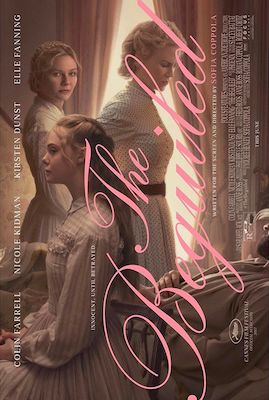 In her review of Wonder Woman, Grace Randolph of Behind the Trailer referred to a new feminism that elevated women without vilifying men. Gal Gadot’s Wonder Woman and Emma Watson’s Belle in Beauty in the Beast, Randolph says, represent this new feminism, and she craves to see more representations in popular culture. Methinks Sofia Coppola and the other filmmakers behind The Beguiled failed to receive this memo. I usually leave discussion of feminist themes to female reviewers—or at least to braver men than myself—but since the Beguiled is a Battle-of-the-Sexes story set at a time when there was strong delineation between male and female roles, it is impossible to write about it without writing about its feminism message. That message is as integral to the movie as its plot, setting, and characters.

The Beguiled has a lot to recommend it: a compelling story, strong performances by all the actors, beautiful cinematography, an interesting use of sound, and the costumes and setting needed to establish it as a Civil War drama. Amy Beth Silver on sets and Stacey Battat on costumes deserves recognition. I never once doubted the authenticity of the drama. If there was any anachronisms—the bane of historical fiction—it escaped my detection. Cinematographer Philippe Le Sourd brought it to life. Whether it’s the establishing shots of the plantation house, or the canopy of trees above a trail, or the soft and warm shots on the interior, every frame stands out as beautiful. Once again, the photography stands out as one of the best reasons—arguably the best reason—to see a film.

Directed by Sofia Coppola, who also wrote the screenplay, The Beguiled is the second film adaptation of Thomas Cullinan’s 1966 novel of the same title. In the 1971 adaptation, directed by Don Siegel, Clint Eastwood starred as Corporal John McBurney, the character played by Colin Farrell in this year’s release. Since I’ve never read the novel nor seen the previous movie, I can’t judge the faithfulness of this film to these sources. But I feel this history is worth mentioning, because, though the feminism presented in the story feels dated to us in 2017, in 1966 when the novel hit the shelves, and again in 1971 with the release of the first film, that feminism would’ve felt progressive, even controversial.

One day while collecting mushrooms for dinner, Amy, a resident at a Southern girl’s school, found a wounded Union soldier. She helped him back to the school, where Martha Farnsworth, the owner, and Edwina Marrow, a teacher, nursed his wounds. Though the custom was to tie a blue rag to the gate, to alert passing patrols there’s an enemy soldier on the premise, the teachers and students decided to postpone this to give McBurney time to heal before handing him over to as a POW. Like oil and water, a man and this feminine environment, an Union soldier and this Confederate milieu, do not mix. They crackle like that drop of water you flick into a pan of heating oil to see if it’s hot yet. And you best step back, because that spraying oil will burn. There’s a burning in The Beguiled. It’s called LUST—that ever-present, aggressive male lust; the latent and forbidden female lust. It’s uncomfortable and tense—especially as it influences some of the younger girls at the school—but that tension is the driving motivator behind the plot. And it made watching The Beguiled fun, interesting, and rewarding.

Colin Farrell plays McBurney, a Union soldier, who, after years of war, found himself in a man’s heaven. Surrounded by females, with their repressed sexual urges, he chose to manipulate them. He manipulated them both for sex and to create a refuge for himself from the war. Nicole Kidman plays Martha Farnsworth, and Kirsten Dunst plays Edwina Marrow. Along with Elle Fanning as Alicia, the oldest student, they compete for McBurney’s attention and—dare I say it—his kisses. All the performances were topnotch. The Beguiled is a historical drama that required solid performances, and all the actors, including the children actors, delivered. But there was not enough backstory about any of these characters to ground me into sympathizing with any of them. The closest was Amy, the mushroom-collecting girl, played by Oona Laurence. Though she made important contributions to the plot, her character, like the others, lacked full development. I left the theater wishing she had been the ground or point-of-view character, even the protagonist. Like in To Kill a Mockingbird, I think The Beguiled is a “grown-up” story best told through the eyes of a child. For that reason, I give Ms. Laurence my award for best actor. 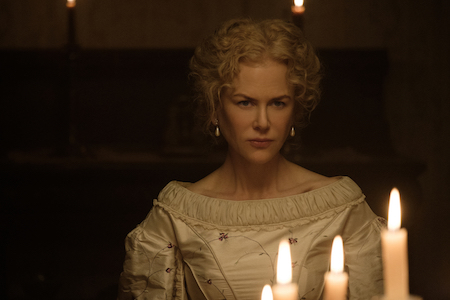 Now comes the time when I must deal with that feminist theme. I wish I could say LUST was the theme—it comes close to being the theme—but LUST is the fuel that drives the plot to its thematic designation. If modern feminism is about elevating women without vilifying men, then The Beguiled failed its theme. McBurney is clearly a villain in The Beguiled; he’s the one doing the beguiling. He’s the Great Beguiler! As the male lead in an otherwise female cast, he stands for all men. (I’m uncomfortable for him standing for me.) Men had been beguiling women for centuries, for ages, perhaps since the time of the cave-dwellers. So perhaps this is a microcosm of world history. In 1966, when Cullinan wrote the novel, that was revolutionary. It was an important step we had to pass. But in 2017, it feels like rehashing old ground. It’s picking a scab. It’s eating already chewed food. (I know I’m mixing metaphors.) There was a time when feminism needed to expose gender roles and expectations, and the inherent inequalities of those roles—The Beguiled does a wonderful job at that—but now we are more concern with eliminating those roles and expectations. We are striving for a feminism that elevates women without vilifying men. Equal pay for equal work, shattering the glass ceiling, and allow Hillary Clinton to run for President without accusing her of not smiling enough—these are the issues we’re working on now.

This rehashed feminism presented in The Beguiled not only degrades men, but it also degrades women. No doubt McBurney is a villain for manipulating the women for his selfish reasons, but it’s a ill-commentary about how easy the women were manipulated. Perhaps women in the 1860s were susceptible to such manipulation, but I like to think that both Martha Farnsworth and Edwina Marrow had the experience and intellect enough to guard themselves against a little flattery. In the end, I don’t think The Beguiled is a fair or complementary representation of either gender.

And yet, it’s convincing story. It feels plausible, perhaps even probably: This is exactly what would happen if a wounded soldier found himself in household of women! I liked the movie, but I left it feel unsettled. I had to chew on it. In this review, I tried to analyze that mixed-reaction. The Beguiled is a good movie, worth seeing in the theater. The pace is slow, but the photography and the performances makes it worth it. I’m not overly familiar with Sofia Coppola’s work. Her role in The Godfather: Part III (1990) ruined that movie for me, and I didn’t like The Virgin Suicides (1999)—the only other movie she directed that I’ve seen—so I don’t run to the theater when I see her name attached to a project. Of what I’ve seen, The Beguiled is her best work. Though The Beguiled didn’t turn me into a fan, I know I’ll now check out some of her other films that I skipped over. And you should see The Beguiled, because it has a lot to recommend it. 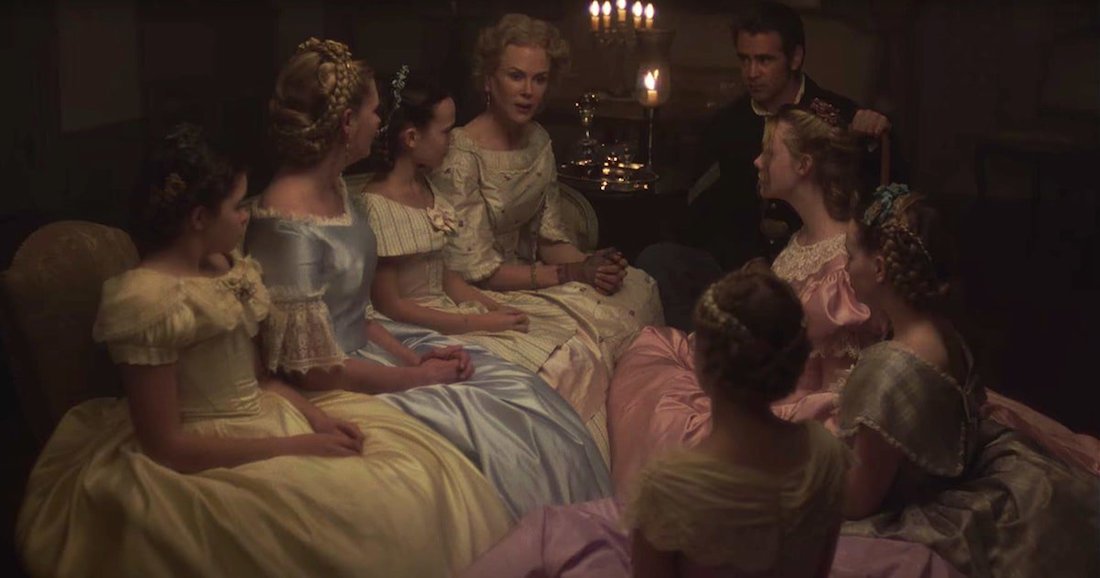