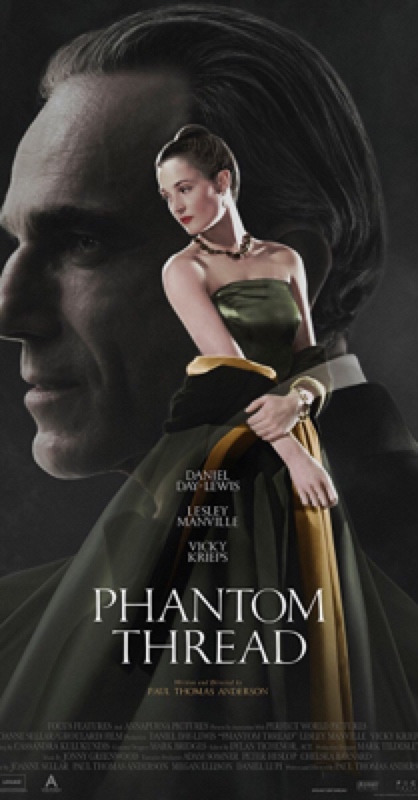 As the movie ended and the credits rolled, the theater emptied out fast, as if the audience couldn’t wait to escape. I don’t think Phantom Thread went over well with my fellow moviegoers, and after they left, I sat in the empty auditorium and watched the credits and pondered what I thought. I knew it was one of those movies I would have to absorb, before I could answer the simple question: Did I like it?

Phantom Thread is a troubling film about a troubling relationship. It’s an abusive relationship, not physically, but psychologically, and as a result, it leaves all involved damaged. It even damaged Daniel Day-Lewis, who made the decision during the filming to retire. “I do know that Paul [Thomas Anderson] and I laughed a lot before we made the movie,” he told W Magazine. “And then we stopped laughing because we were both overwhelmed by a sense of sadness. That took us by surprise: We didn’t realize what we had given birth to. It was hard to live with. And still is.” Having seen the film, I’m not surprised their laughter stopped. Phantom Thread is depressing.

I’m okay with that, by the way. Who needs or even wants every film to be a feel-good love story? Problem is: I think many people went to the theater thinking it would be a feel-good love story and found instead a honest tale about obsession and abuse. I blame the marketing department, because I don’t think they did a good job preparing the audience for the dark tone this movie achieved. I like the dark tone. I like darkness. In fiction, I find our darker side, our baser instincts, more interesting and dramatic than our better nature. But if you go to a movie hoping for an uplifting tale and instead are brought down, you will probably leave the theater not liking the film.

That’s unfortunate, because Phantom Thread is a good movie. I had absorbed it and decided that I like it. Set in the 1950s, it tells the story of renowned fashion designer Reynolds Woodcock and his mistress, Alma, a waitress who served him breakfast one day. This story is a rare incident where the central character, Woodcock, isn’t also the protagonist. He’s the immovable stone Alma, the protagonist, must struggle against to achieve her goal of a more meaningful relationship with him. As the final credits rolled, it surprised me that Vicky Krieps, who played Alma, had top billing over Daniel Day-Lewis, until I realized it was natural to list the protagonist first.

Phantom Thread is a beautiful film. Paul Thomas Anderson, who wrote and directed it, served as his own cinematographer. The photography is arguably the number one reason to see it. True or not, it felt as if he favored available lighting, to give the movie a warm, homelike quality, but it also exposed the dark reality of that home. Though every scene qualifies for that description, I’m thinking particularly about one scene where Alma tries on a dress-in-progress for Woodcock. They’re in a workroom that feels like a converted attic. The lighting is soft, low key, and it bathes Alma’s face in a beautiful reddish glow. It feels romantic, appropriately so, because it’s the movie’s most romantic scene, but even in this romantic scene, there were troubling undertones. Woodcock was more concerned with fitting the dress than interacting with his model. Though it was their first date, he treated her like a dressmaker’s mannequin. 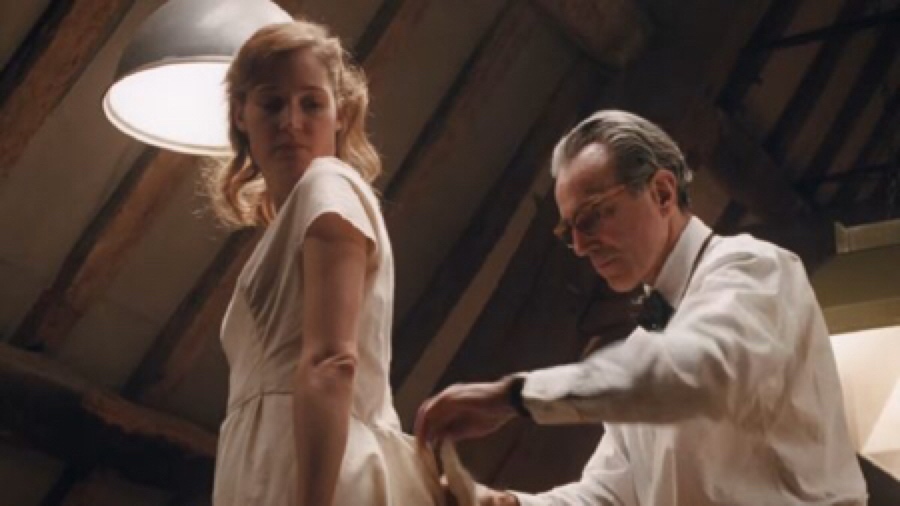 Vicky Krieps as Alma and Daniel Day-Lewis as Reynolds Woodcock

I spent time describing the photography, because this is a movie where the photography is as important as, if not more important than dialogue and action in telling the story. Photography is used to show us everything from Woodcock’s disdain of Alma’s cooking to the clockwork routine of the house. The visual storytelling in it is amazing, but it also makes it a slow paced movie. It’s runtime is 2 hours 10 minutes, but only about five things happen in the movie, whereas modern filmgoers are used to ten or fifteen plot points in a movie this long. But Anderson isn’t interested in plot points. He writes scenes. He lets the conflict in those scenes build and build, until a small disagreement becomes a roaring argument, until the everyday action of buttering toast or cooking asparagus incites door-slamming rage.

When awarding best actor in these reviews, I try to look past the obvious, but for Phantom Thread the obvious is the right choice. Daniel Day-Lewis is the best actor. You could cast him in a cameo as the guy who sweeps the bar at closing time, and he would still be the best actor in the film. In Phantom Thread, Reynolds Woodcock was the most challenging character to play, and Day-Lewis portrayed him to perfection. Vicky Krieps gave a convincing performance as Alma, and Lesley Manville played Cyril, Woodcock’s sister. In these reviews, I don’t do enough to credit the people behind the scenes, but I want to praise Mark Tildesley, the production designer, and his crew for the work they did in recreating the 1950s. Since this was a movie about a fashion designer, the costumes by Mark Bridges were especially important. The music by Jonny Greenwood was as haunting as the rest of the movie.

I can’t recommend for you to see Phantom Thread. I think it’s a good movie. It has a powerful story, a timeless story about love going bad, and I found the acting excellent, the photography beautiful, and the theme troubling in a good way. But it’s not a fun movie to watch, and I suspect most who see it, whether they liked it or not, will leave depressed. In this review, I tried to prepare you for the experience of watching it, because I think the marketing is misleading. If you are intrigued to watch Phantom Thread, it’s a good movie to wait for home viewing. My opinion boils down to this: Phantom Thread is a beautiful, powerful, thought-provoking film, but one that will not agree with everyone’s taste.

Let me add a short note, a P.S. if you will: Since I try to shelter myself from press about a movie until after I write its review, I didn’t know when I wrote the above that Phantom Thread is up for Best Picture this year. This fact doesn’t change my opinion of the movie, but it does suggest I might be wrong about the audience reaction. 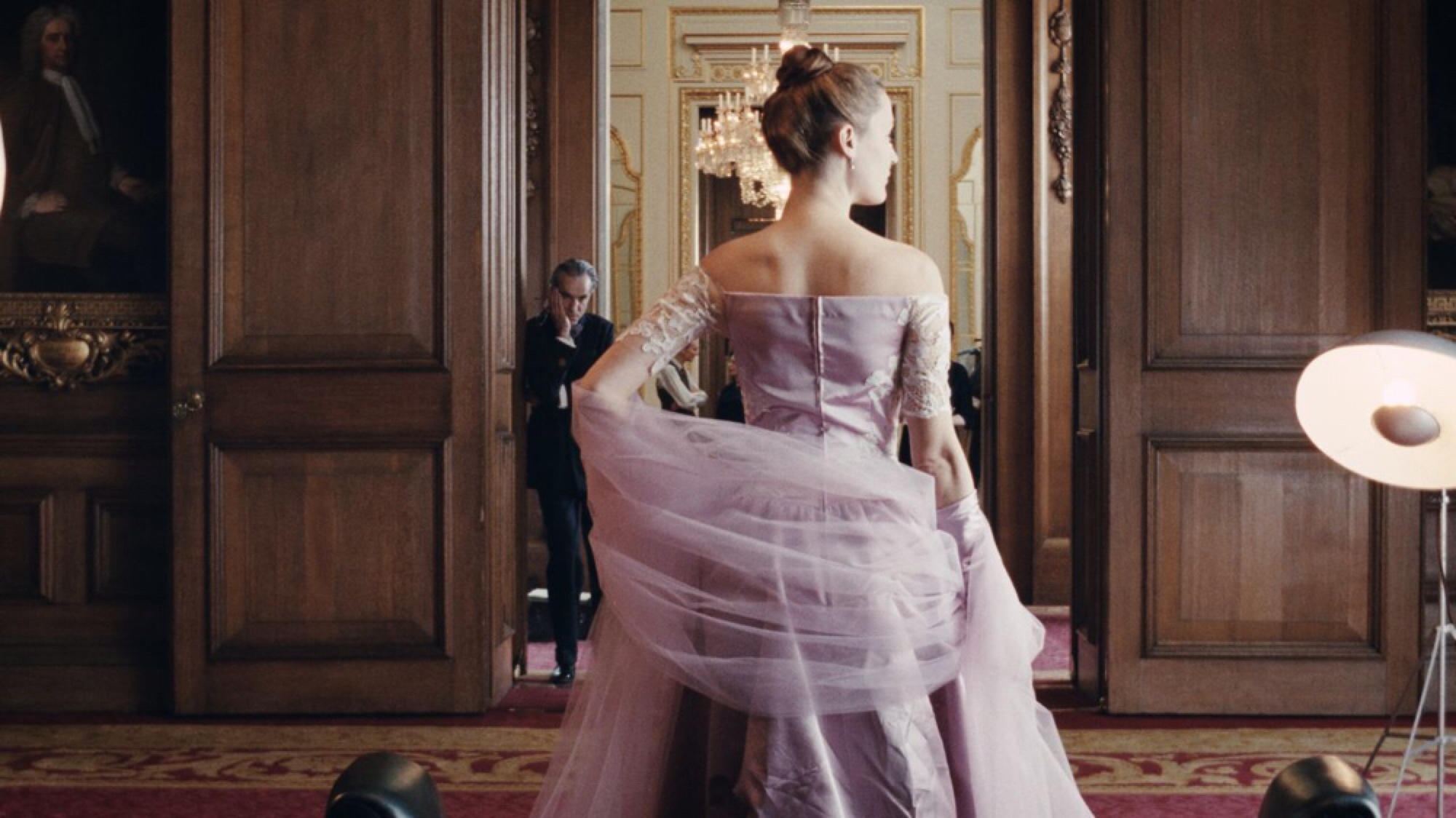