Movie Review: On the Basis of Sex

Home / Movie Review: On the Basis of Sex 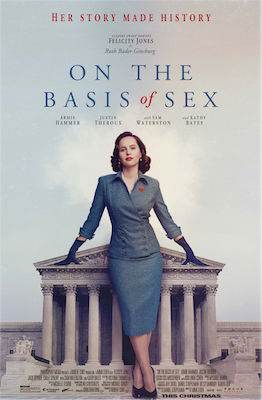 When I left the theater after seeing On the Basis of Sex, my first thought was, “That sets the bar high.” After Escape Room, it was the second movie I saw in 2019, but it wouldn’t surprise me if, come the end of 2019, I consider it the best movie of the year. Nor would it surprise me if I consider Felicity Jones best actress for her portrayal of Ruth Bader Ginsburg. The success of this movie doesn’t rest with her alone, because it’s one of those movies where everyone involved, both behind and in front of the camera, did their job with excellence. Despite that, Jones stands out, and not just because she was the protagonist, but also because her ability to emote is the most memorable element in the film. Though I usually try to write these reviews within a week of seeing the film, try to write them before seeing the next movie, it’s been a three weeks since I saw On the Basis of Sex, yet Jones’ performance feels as fresh to me as the moment I left the theater.

I liken her performance to a Shakespearean soliloquy. We don’t go to Shakespeare’s plays to be surprised or to experience twists and turns. Perhaps a couple hundred years ago we did, but now we know the stories. We go to see them performed by different actors and interpreted by different directors. We go for the soliloquies. Will we ever tire of Hamlet asking “To be or not to be” or Henry the Fifth’s “We few, we happy few”? Since On the Basis of Sex is a biopic, since it’s based on historical events, we know how it begins and we know how it ends. We don’t watch it for twists and turns, and it’s impossible to spoil the movie for those who hasn’t seen it, because there are no surprises. We see this movie for the performances, for the experience of seeing the movie. It’s the journey, not the destination the matters. But the destination is an elegant courthouse speech–a soliloquy–that Felicity Jones delivers to perfection.

Tears in my eyes? Yes, I wept, and not just because the theme of the speech was equality and the struggles we face in achieving it. Nor just because the speech completes Ruth Ginsburg’s character arc. Nor just because the advantage of historical perspective tells us the importance Ruth Bader Ginsburg has for this country and its judiciary. Nor just because the language was poetic. I weep for all those reasons. I also weep because Felicity Jones made it happen. Every tone her voice sounded, every pause she took, every expression across her face made it happen. I keep wanting to make a list of Great Moments in Film; I keep wanting to make it a finite list, like some WatchMojo video. Problems is: There are always new great moments coming at us. And this climatic speech stands as one of them. 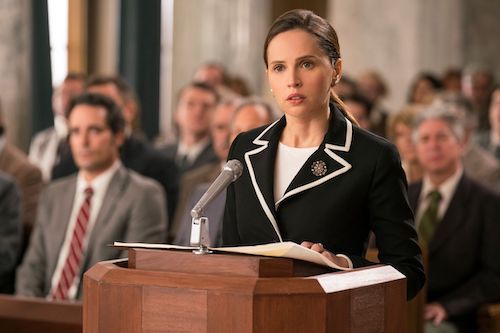 I feel no hesitancy in saying that Felicity Jones’ performance stands as one of the finest things I’ve seen in film. Compare her to Al Pacino in The Godfather, Marlo Brando in On the Waterfront, and Henry Fonda in The Grapes of Wrath. As a movie, On the Basis of Sex sets the bar high for later 2019 movies to reach for, but as an actor, Felicity Jones sets the bar even higher for fellow actors to aspire towards. She wins my aware for best actor in this film.

Other actors include Armie Hammer as Martin D. Ginsburg, Ruth’s husband, and Justin Theroux as Mel Wulf, an ACLU activist. Kathy Bates stars as Dorothy Kenyon, another civil rights lawyer. Chris Mulkey stars as Charles Moritz, Ginsburg’s client. Sam Waterston stars as Erwin Griswold, the Dean of Harvard Law School and later the Solicitor General of the United States. He’s the closest thing to a human antagonist the movie has, but the true antagonist is the conventions that defined gender roles and perpetuated inequality.

Mimi Leder directed On the Basis of Sex. Daniel Stiepleman wrote the screenplay. It began earlier in Ginsburg’s life than I expected. At first, I questioned that decision, but by the end of the movie, I appreciated it. Ginsburg’s goal wasn’t to win one court case; it was to prove that a woman, herself, could be a capable lawyer. For us to understand the opposition she faced meant beginning the story with her entrance to Harvard Law School.

I very rarely use absolute phrases like must see, but I believe On the Basis of Sex is a must-see film. It offers us an excellent story that is relevant to our history, our current affairs, and our future aspirations. The direction was precise and the performances were excellent. It’s an emotional film, far more emotional than I expected. I teared up several times. At the end, as the credits rolled, the audience applauded. 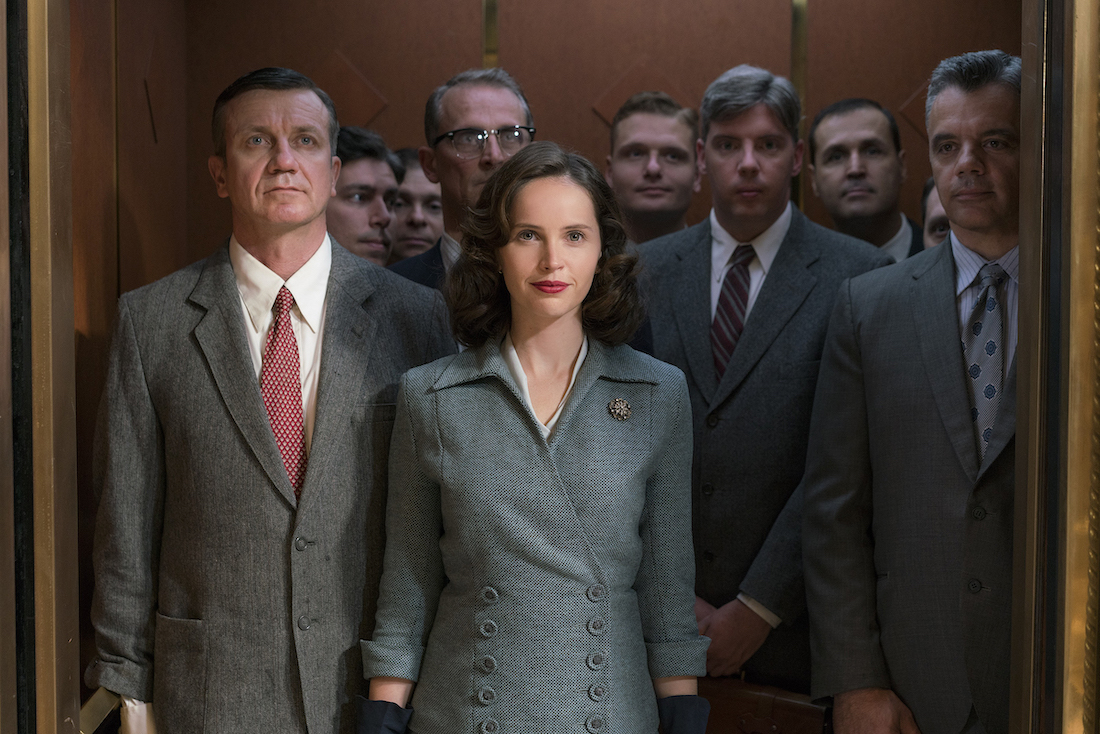