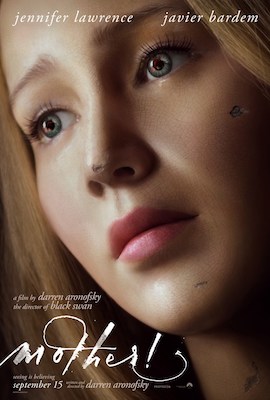 Anyone who knows Classical music knows Maurice Ravel’s Boléro. Of this piece, Ravel called it a composition with “no music in it.” Since I never studied music, I don’t know what to make of this quotation, but I do know that I love to turn the lights off, pour a glass of wine, sit on the floor, and listen to Boléro play. With the soft tap of a drum and a quiet flute, it begins. The melody is repeated, over and over, for fifteen minutes, and with each repetition, new instruments and musicians join in. So what began soft, quiet, almost inaudiable, by mid-song becomes a compelling crescendo and by song’s end, with the full orchastra playing, is a joyous riot. It ends with a flourish that drops into sudden silence. That silence always gives me goosebumps.

I mention Boléro, because Mother! employs the same pacing of a quiet, understated beginning followed by rising complexity. The movie is a crescendo. And if Boléro is a symphony with no music, Mother! is a story with no plot. Instead of plot, writer/director Darren Aronofsky tells the story with images–from idyllic landscape surrounding a country house to a violent riot and beyond–which he employees effectively to raise the tension. He employees a simple literary convention: Create a closed society and then introduce a stranger. Once he establishes that formula, he extrapolates it to extremes, even to absurdity. Filmmakers and writers often use absurdity to create humor, but Aronofsky uses it to create fear, horror, terror. Mother! isn’t for everyone. It’s experimental, and storytelling experiments tend to have as many distractors as fans. But as I watched the movie, I sat enthralled in the action, in the characters, in the crisis, and in the mystery.

What’s happening? I wondered, during every second the film played. Why is it happening? What does it mean?

The experiment works because of the power of proformances. I’m thinking of Javier Bardem and Jennifer Lawrence as the leads, and I’m also thinking of Ed Harris and Michelle Pfeiffer in their supproting roles. But I’m also thinking of minor characters who had only one or two lines, but who performed those lines to prefection. They added to the absurdity; they added to the horror. Lawrence wins my award for best actor, though, because without her precise performance, they movie would’ve fallen apart. She framed Mother! from its first image to its final shot.

I won’t write about the theme for two reasons. First, I fear my take on the theme might spoil the movie for you. Secondly, Mother! is so experimental and open to interpretation that it doesn’t have one theme. Different viewers will pull different interpretations from it, and that is part of the fun in seeing it. In watching Mother!, I found myself thinking about several pieces of art. I already mentioned Boléro, but another piece this movie reminds me of is a short story by Charlotte Perkins Gilman entitled The Yellow Wallpaper. It has the same type of vibe. But in film, I think the closest thing I can compare it to is the closing image from 2001: A Space Odyssey. What is an infant doing in a transparent egg floating in space? No one, not even Stanley Kubrick or Authur C. Clark have a good answer for that, but everyone loves debating it. Mother! has the same obscurity. 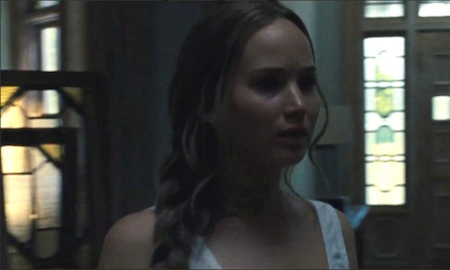 Will it generate the same decades-long debate over meaning as the Kubrick movie? That remains to be seen, but it’s clear that different viewers will leave the theater with different takes on what they had just seen.

Not knowing much about Mother! before heading to the theater, I expected a haunted house horror picture. It’s not that, but in a way it is. (I’m a writer; I get to countradict myself.) It’s a haunted house movie without the haunted house tropes we had all become too accustomed to. No thumping noises in the night, no half-seen figures in the shadows, no ghosts in the mirror–Mother! does away with the hackeyed and give us something fresh. It’s no less scary. In fact, it’s scarier.

And that’s why I like this movie, because it evokes fear and other emotions without first grounding it in the rational. When I try to explain to people why I like Classical music, like Ravel’s Boléro, I contrast Classical music to rock-and-roll. Rock music evokes emotions with the pairing of lyrics to music, and that makes it, at least partly, an intellectual journal. But Classical music bypasses the intellect. It aims for the spine! It evokes emotions directly, as the harpist plucks the strings. Though like any movie, Mother! has its intellectual component, it also evokes emotions directly. We fear because Jennifer Lawrence’s character fears. For the duration of the movie, we are locked in her point-of-view and we understand the emotional journey she’s on, because we are on the same journey. I don’t know that I’ve ever felt so connected with a movie protagonist before.

I think you might go to Mother! and love it, or you might go to it and hate it. It’s the type of movie that people are either going to love or hate. But I can’t imagine you’re going to the movie and not be moved by it. After the movie played, as the other audience members filter out of the theater, I remained seated. The credits rolled, and Skeeter Davis sang “The End of the World.” It was the perfect closing music for Mother! And as when I listen to Boléro at night with he lights, I felt goosebumps.