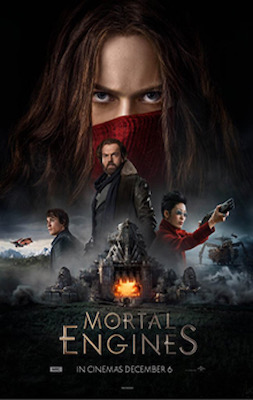 When I first heard about a movie based on the premise that future cities will be giant, mobile war machines, my first reaction was indifference. The concept sounded like a challenge to my willing suspension of disbelief, that psychological trick we play in order to enjoy novels, short stories, movies, and other works of fiction. The trailers for Mortal Engines did little to reverse this first reaction. But last weekend, when it opened in Olympia, I decided to see it. I went to it hoping that it would prove my indifference wrong. I felt encouraged, because Peter Jackson was involved in the production. And as you never judge a book by its cover, it seemed unwise to judge a movie by its dubious premise. How many times have I went to a movie with lukewarm expectations only to walk out blown away? Enough times that I hoped it would happen again.

Mortal Engines was a mess. It was a mess in characterization, a mess in exposition, and a mess in action. It’s another film based on a Young Adult dystopian novel, a trend that began with The Hunger Games, but which I became bored with so early that I’ve still haven’t seen Mockingjay or Catching Fire. I doubt that I ever will. I saw Divergent but I skipped The Maze Runner. I imagine that there are other movies of the same ilk, but since these movies don’t please me, I don’t pay attention to what’s available in this sub-genre. One day, I’m going to sit down and try to figure out what it is about this epoch that makes dystopian futures the vehicle for coming-of-age stories, but I have yet to puzzle that out. Mortal Engines offers no help in solving that enigma.

I used the word mess to describe Mortal Engines, but a better word of the day is cluttered. In my mind, I liken it to a messy, cluttered desk. How does anyone work on a cluttered desk? And how am I, a movie lover, supposed to enjoy a cluttered movie? It was cluttered in characters. Every time I tossed popcorn into my mouth, it seemed they were introducing a new major character. It wasn’t enough that we had to sympathize with Hester Shaw, the protagonist, but we also had to sympathize with Tom Natsworthy, her companion and love interest, and Anna Fang, a freedom fighter. We had to sympathize and follow the character arcs of Katherine Valentine, the antagonist’s daughter, and her friend Bevis Pod. (Yes, there’s a character named Bevis Pod in this movie.) We also had to follow the character arc of Thaddeus Valentine, the antagonist. There was a character named Shrike, who had the most emotional moment of the film. At least it could’ve been if the filmmakers properly developed his character. As it is, the moment felt forced and contrived. 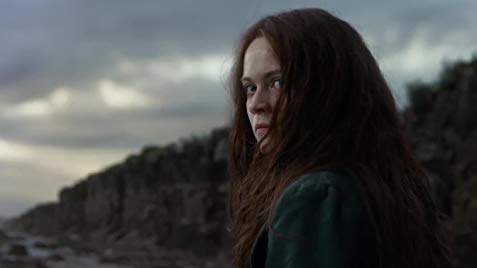 There were other characters that the movie introduced and whom we’re supposed to feel sympathy for, but with so many characters, none of them, not even Hester Shaw, received the development necessary for evoking sympathy. Not that they didn’t try. They tried, but that led to my second big complaint about Mortal Engines–cluttered exposition. All those characters needed their own backstories, and the filmmakers squeezed those backstories into the plot. Every five minutes, it seemed, someone was telling someone something expositional. Hester alone seemed to have four or five flashback sequences. It made the movie feel very choppy; it forced the filmmakers to condense the main plot. There were times when I felt I was watching the Cliff Notes version rather than movie itself. The plot was there, but rather than feeling like the chief storytelling element, it took a backseat to the expositional set-pieces.

These missteps might’ve been forgivable if the action scenes were great. Once again, the filmmakers tried to make them memorable, but instead, they made them–what’s the word of the day?–cluttered. They were poorly filmed and poorly edited. It was impossible to tell what was happening or why it was happening or where in the general conflict it existed. As such movies tend to be these days, the action was CGI overkill. I’m more forgiving of that than most reviewers, but like every other element in a movie, it has to work to tell the story. The CGI in Mortal Engines, though believable and seamless, failed at storytelling.

Hera Hilmar starred as Hester Shaw. Other actors included Robert Sheehan as Tom, Hugo Weaving as Thaddeus, Jihae as Anna Fang, Leila George as Katherine. My award for best actor goes to Stephen Lang as Shrike. As I said earlier, Shrike had the most emotional moment in the film. Though faulty character development made it less impactful than it should’ve been, Lang did an excellent job in conveying the pathos of the moment.

I blame the failure of Mortal Engines on the writers–Fran Walsh, Philippa Boyens, and Peter Jackson–but I also believe Christian Rivers, the director, shares in this blame. A prodigy of Jackson’s, Rivers had worked as a storyboard artist and visual effects supervisor. Perhaps that’s not the proper résumé for directing a $150 million dollar movie. Simon Raby worked as the cinematographer; Junkie XL provided the music. Jonathan Woodford-Robinson edited Mortal Engines. Since the editing was a major problem in this movie, I guess he also must claim his share of the blame.

The novel was written by Philip Reeve. It’s the first novel in a quartet. Since I never read it, I can’t judge how much of the movie’s problems lie in its source. I suspect this is a lesson in how not to adapt a novel for film. I fear the filmmakers tried to incorporate too much of the novel into their movie, to stay faithful to its pages, but what works in prose doesn’t always work in film. I think they would’ve been wise to drop some characters and their subplots and used the freed up time to better develop Hester and Thaddeus and the conflict between them.

Mortal Engines is a no. Often when I say no, I mean wait for home viewing. But this time I mean no. Just no.