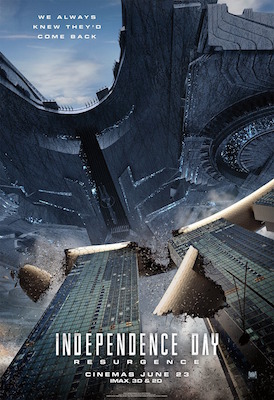 Remember how in the 1980s and 90s we awaited a new Star Wars movie, and then LucasFilms released A Phantom Menace, and we said, “Huh?” It wasn’t that we hated the movie, but we knew it wasn’t the Star Wars movie we wanted and anticipated. This is the way I feel about Independence Day: Resurgence. I waited 20 years for a sequel to 1996’s Independence Day. It was a great movie, a big blockbuster, with exciting special effects and intriguing characters. Finally! Independence Day: Resurgence! One of my most anticipated movies of 2016. I had to see it opening weekend. I bought my ticket online and showed up at the theater in time to buy popcorn and soda. And then the movie!

I didn’t hate it, but it wasn’t the Independence Day movie I wanted and anticipated. That the sequel is never as good as the original is a truism that we all accept. But after twenty-years to plan and write Resurgence, the filmmakers had time to do it right, to make it as good as the original, if not better. And if not as good as the original, then at the very least it should’ve been a better movie than it was. Directed by Roland Emmerich, who helped write it, Resurgence fails at the most fundamental stage of production–the writing. It is impossible to make a good movie from a bad screenplay, and the screenplay is incoherent and over-loaded with characters.

Perhaps it was inevitable that there would be so many characters, because they needed to do two things. First, they needed to bring back the old team: Jeff Goldblum as David Levinson; Bill Pullman as President Whitmore; Judd Hirsch as Julius Levinson. It is the nature of sequels to want familiar faces on screen, and Goldblum and Pullman provide those familiar faces. Hirsch also provides a familiar face, but his character as no real purpose in this movie. I like Judd Hirsch, believe him to be a good character actor, and wish he would appear in more movies. But every scene he appeared in Resurgence could’ve been cut with no impact on the plot. He provided comic relief, but so did other characters whose presence in the movie were more natural. I’m thinking about another original cast member, Brent Spiner, as Dr. Brakish Okun. When I laughed, it tended to be at Okun’s antics.

Second, they needed to introduced the new team of fighters. This includes Liam Hemsworth as Jake Morrison, Jessie T. Usher as Dylan Hiller, and Maika Monroe as Patricia Whitmore. In this need to reunite the old team while introducing the new team, Resurgence reminds me of Star Wars: The Force Awakens, but that movie balanced this dual need better. In The Force Awakens, I cared about every character, both old and new, but in Resurgence, I found it impossible to care about any character. They were all flat; they all lacked substance. Jake Morrison, the rebellious pilot; Dylan Hiller, the top gun; Patricia Whitmore, the loyal but concerned daughter–they could’ve used flashcards and cardboard cutouts in their characterizations. And not only did we have all these characters to care about, but also they all had relationships. They had love interests and parents and children and siblings. Everyone lost someone in the war against the aliens, and we are supposed to care about that, to feel their grief, but I say to you: How do you feel the grief of a cardboard cut out?

Resurgence also had a problem with geography. We are told that the aliens ship is as large as the Atlantic Ocean. When it lands, one end lands in London and the other on the Eastern Seaboard of the United States. And that works because the world is flat.

With five writers on the project, you’d expect one of them would’ve remembered that Earth is a sphere. And that wasn’t their only problem with geography. After the aliens landed, Julius, on the Eastern Seaboard, meets up with a carload of kids. (That’s right! The movie is half over, and they’re still introducing characters we’re supposed to care about.) In one day, less than a full day, and apparently with only one tank of gas, they drive from the Atlantic coast to Area 51 in Nevada. It is this logic, or lack of, that makes me think that Emmerich and his cohort of writers believe we are stupid. I hate it when Hollywood tells me I’m stupid.

The movie had great special effects. Since it’s a science-fiction disaster movie, that’s what we paid to see. The destruction of London was beautiful and believable. The tidal wave that took out the Eastern Seaboard was also well done. If anything there wasn’t enough of these scenes of destruction. In the final act, Resurgence became a monster movie. The climax felt more like a sequel to Godzilla (2014), sans Godzilla, than a sequel to Independence Day. Though exciting and spellbinding–keeping me glued to my seat–it wasn’t the battle against the aliens I expected. I wanted to see a dynamic dogfight leading the destruction of the alien space ship. I didn’t pay to see man fight monster. That’s a ticket for another day, another movie.

Despite all these objections, I didn’t hate it. It wasn’t the Independence Day sequel I wanted or anticipated, and it suffers several flaws in story logic. But it’s a big-budget disaster movie that gave us what we want and expect in big-budget disasters movies. I usually don’t spend extra to watch a movie in 3D, but a 3D showing was the one that fit best in my schedule. The 3D failed to add anything to the movie. If you go to see Independence Day: Resurgence, don’t pay extra for 3D.

Resurgence ended with a hint that Independence Day was now a franchise, that we can look forward to more movies. I hope in future installments Emmerich will focus more on the story, on developing a believable plot driven by well-rounded characters. I see potential for this franchise. Resurgence failed to live up to that potential, but it served to introduce the team that take us into the future. Though disappointed in Resurgence, I find myself already anticipating the next Independence Day movie.