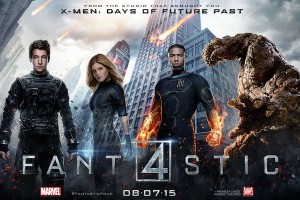 When Fantastic Four opened with a young Reed Richards (Owen Judge) in class on career day, saying his career goal was to be the first person to teleport, I knew the filmmakers had taken a false step, and the movie would suffer from it. Maybe it is just a prologue, I try to console myself. They’ll cut from this scene to an adult Reed Richards about to become one of the first four persons to teleport. No such luck! Young Reed’s goal to become the first person to teleport becomes the movie story goal, the goal that drives much of the movie, which becomes less a movie of superhero versus super villain and more a movie about building the machine. When they finally introduced Dr. Doom, the super villain, the conflict that ensues feels tacked on as an after-thought.

Josh Trank, coming off his success with Chronicle (2012), directed this movie. Along with Jeremy Slater and Simon Kinberg, Trank wrote the screenplay. Though he claimed that he had a vision for this movie that would’ve blown moviegoers away, and that there is a cut that would wow us, I find myself doubting these claims. Since I found nothing in this movie I liked–from the acting to the editing to the special effects–I doubt any footage was filmed worth seeing. What is Trank saying? That they left all the good parts on the editing room floor?

Though I am growing weary of superhero movies, I looked forward to seeing this movie. My comic book phase as a kid was shorter than most kids’, and I never became a fan of any series, but I do remember that the Fantastic Four where among my favorite. When Ioan Gruffudd, Michael Chiklis, Chris Evans, and Jessica Alba made their Fantastic Four movies in 2005 and 2007, I felt excited at seeing them. Until I saw them. And then, like Gary Oldman in The Fifth Element, I wanted to yell at the top of my voice:

I am very DISAPPOINTED!

Perhaps that disappointment should’ve warned me against this reboot, but I suffered a naive presumption that the producers, understanding where the previous movies have failed, would now make a Fantastic Four movie that was well-written and well-acted. My optimism increased when I saw that Sue Storm would be played by Kate Mara, whose performance in Netflix’s House of Cards helped make that series interesting and thought-provoking. But that optimism ended within five minutes of the movie, when I realized that they intended to give us an unwanted and unnecessary backstory into Young Reed’s dysfunctional family life.

The movie stars Miles Teller as Reed Richards, Kate Mara as Sue Storm, Michael B. Jordan as Johnny Storm, and Jamie Bell as Ben Grimm. Toby Kebbell plays Victor Von Doom. I guess there had been some criticism of casting Jordan, a black man, as Johnny Storm, who was white in the comic books, but I have no problem with that decision. That made Sue Storm an adopted child, and again I have no problem with that change. The real crime of these casting choices had nothing to do with race; it had to deal with chemistry. There was no brother-sister chemistry between Sue and Johnny Storm. It felt as if they were strangers to each other. In fact, there was no chemistry between any two characters in this movie, not between Reed and Ben, who were best friends since grade school, and not between the younger Storms and their father (Reg E. Cathey). There was not even the negative chemistry between Victor Von Doom and Reed Richards, as I expected. The acting felt unmotivated. Do I blame the actors or the script that gave them nothing to work with?

The movie feels episodic. It feels like an anthology of three short movies about the Fantastic Four. There is the opening story about building the teleporter and becoming the Fantastic Four. A short story about learning about their powers and how to use them follows. In the third and final episode, the Fantastic Four battles Dr. Doom. As a moviegoer, it was this contest between the superhero team and the super villain that I paid to see. But this conflict felt like an afterthought. It was rushed, poorly-written, poorly-acted, and CGI-laden.

I wish I could say there is a silver lining in this cloud, but by every standard in which I judge a movie, this is a bad one. The writing was lousy; the acting was lousy. Neither the director nor the editor seemed to appreciate what the moviegoers came to see. Even the effects were lousy. I don’t hate CGI–it serves its role in modern cinema–but I do hate when it dominates a movie. It took over Fantastic Four, especially in the climatic scene. I could forgive this if the CGI looked real, emerging me deeper in the movie, but it looked fake, breaking me out of my suspension of disbelief. In many scenes, Sue Storm floats in a force field bubble. All I could think about was the Good Witch of the North in the Wizard of Oz, arriving in her bubble. It looked so ridiculous, I almost laughed. I almost cried. Instead, I released a heavy sigh.

Though they spent time at the end of the movie setting up a sequel, I suspect there will be no sequel. I suspect Marvel will wait another five years, and then try to reboot this wannabe franchise with another set of actors, another director, another writer. Maybe I am wrong, since the sequel is already in development (due in 2017). Whether as a sequel or a reboot, I know the plot I want to see in the next Fantastic Four movie: the battle against the evil filmmakers that keep throw us this crap.