Movie Review: Eye in the Sky 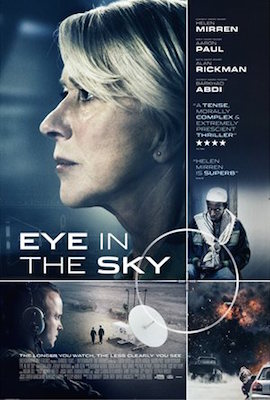 Besides myself, I could count the number of people in the audience on one hand plus one finger. I mean six. There were six persons in the theater, seven if you count me, which I suppose you should. Granted, it was the first showing of the day, but it wasn’t that early. It was 11:25 a.m., the perfect time for anyone wanting to catch a movie before lunch. Such matinee showings tend to be less populous than later showings, but rarely had I been in a theater with so few people. Maybe this skews my judgement about the popularity of Eye in the Sky, about its success, but I fear it is underperforming in the box office. This is unjust, because it is a movie well worth seeing. It is a tense drama about the inherent dilemmas of war, about the hard choices those waging war must make, and about the psychological price they pay for those choices. It is also, to the best of my knowledge, the first fictional work to explore drone warfare in depth.

Eye in the Sky originated as a BBC movie, but somewhere in its development when that deal fell apart, Gavin Hood (Ender’s Game, X-Men Origins: Wolverine) took over the script by Guy Hibbert. Hood found the backing and filmed the movie in his native South Africa. He cast screen legends Helen Mirren and Alan Rickman with Breaking Bad actor Aaron Paul and relative newcomer Barkhad Abdi, from Captain Phillips. Aisha Takow plays Alia Mo’Allim, a young girl selling bread who plays a pivotal role in the story.

This is a war movie, but in tone and drama, it plays out more like 12 Angry Men than Saving Private Ryan. It’s an absurdity: The warriors are in Las Vegas, the officers are in England, and the battlefield is a militia-held territory in Kenya. For years, Colonel Katherine Powell (Mirren) had been tracking Susan Danford aka Ayesha AL-Hady, a British national who had become radicalized and joined a terrorist organization. She had finally pinpointed Danford, with the aid of a spy on the ground (Abdi). Meanwhile in a boardroom equipped with close-circuit TV, General Benson (Rickman) monitors the mission with high-ranking ministers from the British government. Though the original mission was to capture Danford, it became a kill mission when they learned she was preparing two suicide bombers. The drone pilot, Steve Watts (Paul) and his assistant, Carrie Gershon (Phoebe Fox), must carry out the kill mission, but neither had fired a Hellfire missile before. Needless to say, they suffer qualms.

They share these qualms with British ministers. With legal, political, and diplomatic ramifications at stake, this action is debated and referred to such people as the Foreign Minister and the US Secretary of State. No one wants to take full responsibility for this action. And the situation becomes more complicated when Alia shows up outside the target house to sell bread. She gives a face to “collateral damage.” Since she would also likely perish in the drone strike, the dilemma becomes: Is it better to kill one innocent to stop a suicide bombing or to abort the mission, which means the suicide bombers would complete their missions. To Benson and Powell, there is no option than to carry out the strike, but to the government ministers and the drone pilots, who must squeeze the trigger, the moral high ground is not so easily defined.

Though the war against terrorism is the background conflict in this movie, the dramatic conflict of Eye in the Sky is the debate over this dilemma. Maybe you learned in school that literary conflict is between good versus evil, and though that applies for many stories, good versus good often tells a more compelling story. That is the case in this movie, where the central issue is whether to spare Alia’s life or to stop a suicide bombing.

Besides the terrorists, who have no speaking roles in this movie, there are no bad guys here, no villains. Character development fuels this movie. We understand the players on the screen: Powell who must complete her mission, General Benson who must convince the politicians this is the right course, and Watts who would prefer to never squeeze the trigger. Good acting is essential in such movies, and all the performers performed well. This allows us to believe that we are watching real people in a real situation, as events unfold in real time. Though Eye in the Sky is slow movie at the beginning, as the characters are established and the conflict develops, that tension builds us to climax and the emotional release that ensues from it. In lessor hands, this movie would’ve felt sentimental, but in Hood’s hands, the emotions felt honest. I cried drying the climax. In fact, my eyes were still teary as I left the theater. Thinking about it still brings tears to my eyes.

As I am sure you can tell by the above comments, I recommend Eye in the Sky. Though I don’t believe it is driving a lot of viewers to the theater, those who do see it are rewarded with an intellectual and emotional drama.