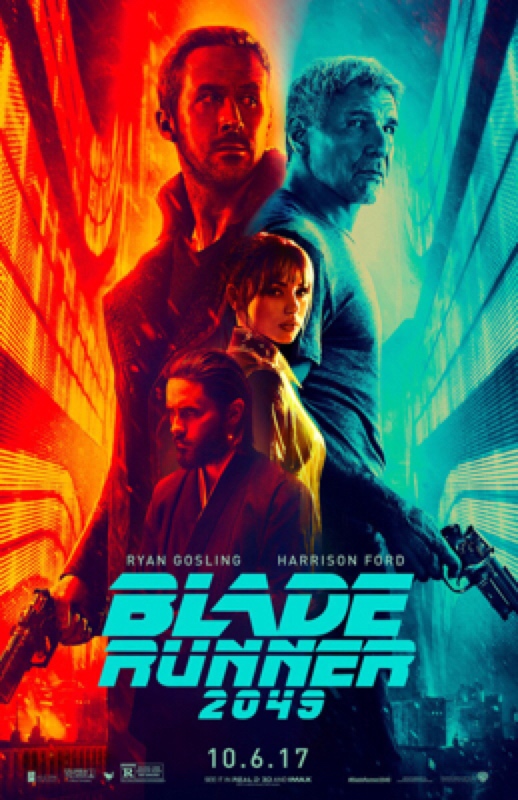 One of Harrison Ford’s line sounded more like Han Solo than Rick Deckard.

There! I said it! Blade Runner 2049 has a flaw. Perhaps it has more than one flaw, but that Han Soloism in Rick Deckard’s mouth struck me as the most obvious false note in the movie. It wasn’t just the line itself that felt more like Solo’s wry humor than Deckard’s war-wariness, but Ford’s delivery and mannerism also struck me as more Solo than Deckard. Han Solo, Indiana Jones, Jack Ryan, and Rick Deckard–perhaps we’re asking him to play too many iconic characters, so he’s getting confused between them, but despite that, he usually delivers. So let’s forgive him this one little slip. As a funny line, it provided a touch of comic relief in a movie that–though great–could use a tad more comic relief.

Now that I had written about the flaw, let me write about what worked. Directed by Denis Villeneuve, Blade Runner 2049 is a fitting sequel to the 1982 Ridley Scott original. It’s a much more complicated plot than the original Blade Runner–with more characters and therefore more character goals and motivations–but it is, as we want a science-fiction thriller to be, suspenseful and enigmatic. Though at 2 hours 44 minutes, it’s a long movie, I was never bored. And it surprised me several times.

No doubt everyone wants to know how it compares to the original. Though it shares the same dystopian future as Blade Runner, there is a tonal shift. This movie feels less pessimistic. That isn’t to call it optimistic. It is still a dark, cynical look of man’s future. There is still a lot to dread, but Blade Runner 2049 feels as if it ended on a happy note. Those who has seen the movie may question my judgement on that, because there is ambiguity in the ending, a dichotomy, that could be interpreted as either hopeful or discouraging. Depending on which cut you saw, the same could same could be said of Blade Runner, but as Blade Runner ended on an ambiguous downbeat, Blade Runner 2049 ended on an ambiguous upbeat. 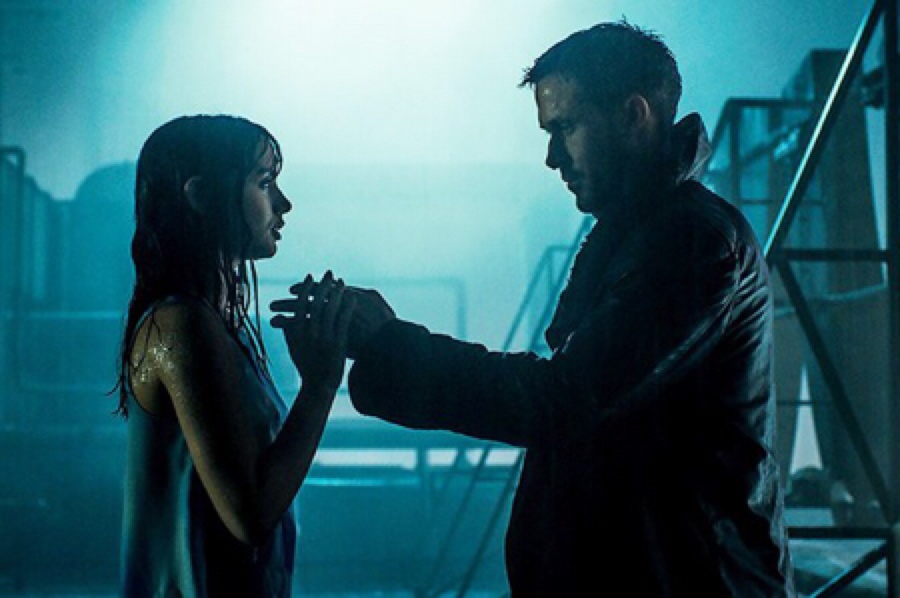 Ana de Armas as Joi and Ryan Gosling as K

In my review for Blade Runner, I called it an actor’s film, where the preformances carried most of the weight of the story. Though the performances were great in Blade Runner 2049, the story is less about the action and more about the visuals, the special effects, and the action set pieces. Roger Deakins acted as cinematographer. Between his photography and the visual effects, this is a beautiful and artistic film. There are several very imaginative shots. In my review of Ghost in the Shell, released earlier in the year, I complained that there was often too much visual information on the screen. Blade Runner 2049 approaches that line without crossing it. The filmmmakers managed to create visions of Los Angeles and Las Vegas that are imaginative, stunning, but still grounded in the characters of these cities as we know them today.

I loved seeing Robin Wright back on the big screen. I meant to write that for my review of Wonder Woman, but neglecting it there, I’ll write it here. I didn’t know she was in this movie, until she appeared on screen, and I thought, Oh yeah! I loved her in The Princess Bride and I loved in Forrest Gump. Though I don’t think she ever stopped making movies, she stopped appearing in the movies I was seeing. She reemerged as Claire Underwood in House of Cards, where I again became a fan of hers. Though the series had began to lose its charm–blame the writers and show producers rather than the actors, who are still delivering stellar performances–I still love seeing her in the series. Her roles in both Wonder Woman and Blade Runner 2049 were supporting roles, but I hope this double-hitter bodes well for her future career.

Ryan Gosling was convincing as K, but nothing stands out about his performance as noteworthy. Except for that one slip I wrote about, Harrison Ford as Rick Deckard was great. He’s not the same Deckard as in the original. He’s more matured, more self-sacrificing, but still as cynical. The performances that stand out as memorable came not from the main cast but from the supporting cast. I’m thinking of Dave Bautista as Sapper Morton, Sylvia Hoeks as Luv, and Jared Leto as Niander Wallace. But my award for best actor goes to Ana de Armas as Joi. She plays K’s holographic girlfriend, and watching her performance made me think, I so need holographic girlfriend! As a holograph, she’s a reflection of K’s inner desires and concerns, and as such, she becomes a narrative device for documenting his character arc. It’s novel, it’s new, and de Armas’ performance made it work. I can’t separate K from Joi, because the most fascinating character trait about K is that he really loved this technological illusion.

Earlier this year, I saw Sicario (2015), and last year I saw Arrival (2016). Blade Runner 2049 is the third film directed by Denis Villeneuve I’ve seen, but I know I’ll see more, and I look forward to seeing his future films. He’s clearly a director on the rise. Hampton Fancher and Michael Green wrote the screenplay. As I said earlier, it’s a more complex story. Though it has its thematic elements, it feels less layered than the original. I’m still chewing on the theme, still chewing from what I took away from the movie, so I’m not prepared to write about it here. There is a enigma behind Blade Runner 2049 that I’m sure will inspire debate and conflicting intepretations.

Blade Runner 2049 isn’t as good as Blade Runner, but since I consider the original as close to prefection as a movie can be, it’s not surprising that the sequel is a little less. Little is the key word there, because there’s more to praise in Blade Runner 2049 than to condemn. With a different director, we get a different take on the same future–only thirty years later. Though it wasn’t the movie I expected, I never felt cheated by it. In truth, I’m no sure what I expected, because I wanted a different story, a different vision, a different mood. I want movies to be fun, entertaining, and thought-provoking, and I want movies to tell exciting stories filled with intriguing characters. The best movies are movies that satisfy those requirements even after repeated viewings. Blade Runner had been such a movie. I believe Blade Runner 2049 will also filfill that criteria. In fact, as I was leaving the theater, I considered buying a ticket for the next showing. Previous commitments prevented me from doing so, but it is a movie I plan to see again. It is that good.