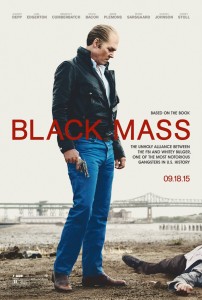 A good gangster movie does two contradictory things at once. First, it must show how the gangster is just like everyone else. Second, it must show how he is like no one else. Black Mass (2015), a biopic about real-life gangster James “Whitey” Bulger, achieved both. It’s the best gangster movie I’ve seen in years; in fact, it’s the best gangster movie I’ve seen since The Departed (2006), another movie inspired by Whitey Bulger. But The Departed approached the subject as fiction, while Black Mass approached it as biography. It claims as its source the 2000 book of the same name, written by Dick Lehr and Gerald O’Neill. Directed by Scott Cooper (Crazy Hearts) and starring Johnny Depp as Bulger, Black Mass is an entertaining and enlightening look at one of America’s most vicious gangster.

Whitey Bulger’s rise to power began in the 1971 Killeen-Mullen War. In the truce that followed that war, he became a key player in the Winter Hill Gang, ran by Howie Winter. In 1974, he became an FBI informant, but according to Wikipedia, there are conflicting versions of how the FBI recruited him. In 1979, Howie Winter was arrested, and Bulger stepped in as the de facto leader of the Winter Hill Gang. In 1986, information he supplied to the FBI led to the downfall of the Boston Mafia chief, Gennaro Angiulo. The Winter Hill Gang, now controlled by Bulger, stepped in the ensuing vacuum to become Boston’s most powerful underworld organization. The real-life Bulger feels like a Chess champion. He used gangland hits and information to the FBI to eliminate rivals and consolidate power.

Black Mass tells the story of Bulger’s rise to power and his downfall. At its heart, it is a rise-and-fall story. It focuses on Bulger’s associated with FBI Agent John Connolly (Joel Edgerton). As with many biopics, the plot felt loose and disjointed. Real life lacks the order and logic of fiction. But the filmmakers could’ve done a better job with presentation. The screenwriters, Mark Mallouk and Jez Butterworth, choose a frame structure. The frame was interrogations of Bulger’s associates, Stephen Flemmi (Rory Cochrane) and Kevin Weeks (Jesse Plemons). The interrogators would ask questions that segue into flashbacks of Bulger’s career. This structure is the movie’s greatest weakness. Loose the frame, I say, and present the story in chronological order, and you would have a more entertaining movie.

Johnny Depp played Bulger as a laconic, stoic loner. You never quite know what he’s thinking, but you fear it’ll end in someone’s death. There was palpable tension every time he was on screen. It was clear that the other characters, even his closest allies, feared him. I love it when I see an actor, whom I’ve seen in a dozen movies, perform so well that I forget he’s just acting. In truth, as I watched the movie, I forgot it was Johnny Depp playing Bulger. Who’s that actor? I kept wondering. So divorced was Depp from his usual acting style that only as the final credits roll did I remember it was him on screen.

With this performance, Depp turned the mythological Bulger into a real man. A living human being who walks on sidewalks, drives cars, loves his mother and his son, and enjoys the camaraderie of his friends. Black Mass developed the personal side of Bulger–the side like every other man–by showing tender relationships with his mother and son. When Bulger learned his son was dying and there was nothing the doctors could do to prevent it, the pathos he showed was the pathos of any father. I found myself in the uncomfortable position of sympathizing with a man I knew was a vicious killer.

But Depp also developed the other side of Bulger, the side like no one else. He portrayed Bulger as a brute-force gangster, as a kill-first-bury-the-body-second gangster. In real life, Whitey Bulger was indicted of nineteen murders and convicted of eleven. (It is easy to imagine the real body count is much higher.) The movie depicted only a handful of these murders, but the murders it showed were chilling. Artistically I’m a realist, which means I prefer scenes in books and movies that feel true to life. I prefer violent scenes that makes me want to turn my head, that leaves me feeling stunned, that reminds us that murder is not some glamorous Hollywood set piece but the worst crime in the world. Though Bulger employed hitmen to carry out many of his murders, he was not above getting his hands dirty. Depp played these murders with the same tight-lip stoicism he used throughout the movie. It sent chills down my back.

Despite a disjointed plot, performances by Johnny Depp, Joel Edgarton, and the other actors make Black Mass a movie worth seeing. It humanizes an inhumane gangster and shows us how only a few personality quirks turns the man who is like everyone else into a man like no one else.