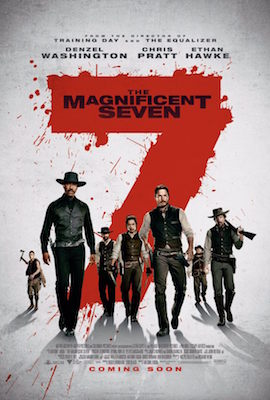 They did it right!

Leaving the theater after seeing The Magnificent Seven, that was my first thought. They did it right! Hollywood had taught us to be wary about remakes. Some are good, some are alright, and some ruin the concept. So anytime I go to a theater to see a remake, I worry about whether it will be worth seeing. And The Magnificent Seven is a remake of the 1960 movie by the same name, which was a remake of the 1952 Japanese movie Seven Samurai. That’s like giving the filmmakers two chances to ruin it. In anticipation of this release, earlier this month I reviewed Seven Samurai and The Magnificent Seven (1960). For different reasons—since they were good in different ways—I recommended both films. Since Denzel Washington anchored the cast of this remake, I went into the theater feeling cautiously optimistic. A compelling story and a good cast don’t always translate into an enjoyable film. But The Magnificent Seven fulfilled its promise. Though an exciting action film, reminiscent of the 1960 film, it achieved the emotional impact that I loved about Seven Samurai. In other words, they blended together the best components of the previous films into one great movie.

In other words: They did it right.

Antoine Faqua directed The Magnificent Seven. He had directed some high-profiled movies like King Arthur (2004), Shooter (2007), and Olympus Has Fallen (2013). (I had recently seen his 2015 movie, Southpaw with Jake Gyllenhaal, and I thought, Wow!) He is a director who is becoming one of my favorites. He seems comfortable and skilled filming both action and dramatic movies, which he demonstrated to strong effect in The Magnificent Seven. Richard Wenk and Nic Pizzolatto wrote the screenplay. Though they paid homage to the two previous films, they create something new, taking the story of the strong protecting the weak in new direction, with new characters and new threats. This is what we want with adaptations—be it from literature, history, or, as in this case, previous movies—we want the writers to ask what will translate well to the big screen, what will resonate with the audience. Wenk and Pizzolatto asked these questions and gave us an excellent screenplay.

It is a screenplay rooted in strong characters. That begins with the villain. In Seven Samurai, the villain was a faceless horde of bandits. In the 1960 movie, Eli Wallach’s Calvera gave the horde of bandits a face. But in this remake, the villain is robber baron Bartholomew Bogue, played by Peter Sarsgaard. A wealthy man stepping on the poor, he seems a villain for our time. After he murders her husband, Emma Cullen (Haley Bennett) hires warrant officer Chisolm (Washington) to protect her town. He assembled a team of seven, the Magnificent Seven, to battle Bogue and his army of hired guns. What follows is a classic Western shoot-em-up. I think of The Magnificent Seven as a hybrid film, a Western drama, that seems comfortable in both strong characters and strong action. Most movies finds its calling in one or the other, but this film is comfortable with both. 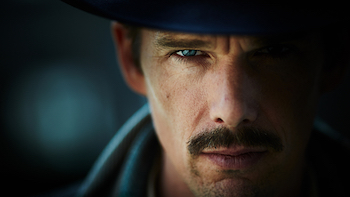 Strong characterizations require strong acting, and the performances delivers. There’s not a bad actor in this cast; there are too many good actors to mention all of them in this review. Since Denzel Washington is incapable of giving a bad performance, there’s no need to talk about him. Chris Pratt’s Faraday gave us a humorous contrast to Washington’s stone-faced Chisolm. Bennett’s Emma Cullen gave the story a strong female character lacking in the previous two films. Warrior Woman is one of my favorite themes, and Emma is a woman determined to fight. Despite this, under Bennett’s performance, she never loses her feminine vulnerability. This makes her the character I find most interesting. But the best performance goes to Ethan Hawke as Goodnight Robicheaux. A Civil War hero, he’s haunted by that war and the role he played in it.

The most interesting thing about the team Chisolm, a black man,  assembles is its multi-racial composition. Byung-hun Lee as Billy Rocks gives us an Asian character, Martin Sensmeier as Red Harvest gives us a Native American. Manuel Garcia-Rulfo as Vasquez gives us a Mexican. Whites are represented with Pratt’s Faraday and Vincent D’Onofrio’s Jack Horne. I like that this movie reminds us that the West, like modern America, was a multi-cultural and racial society. Though there are a few racist moments, the seven are comfortable with each other and treat each others as equals. As American life should be. 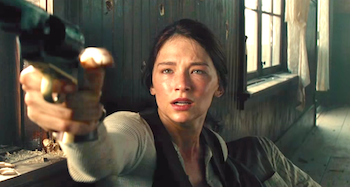 But at its heart, The Magnificent Seven is a Western, and the core promise of that genre is the gunfight. There are several gunfights, from the opening sequence to the climatic showdown. Some were quick, over in a second, while others were protracted set-pieces involving several combatants on each side. They are exciting and tense. During the build-up to one gunfight, Faqua let the tension build for several minutes. I found myself thinking about the Clint Eastwood Spaghetti Westerns directed by Sergio Leone, especially about the three-way gunfight in The Good, the Bad and the Ugly (1966). Was it an intentional homage? Either way, it played effectively on the screen. The tension build in me, until I found myself hoping there wasn’t going to be shooting. But of course there was. And there was the action-packed climax as Bogue’s hired thugs battled the Magnificent Seven. Here all that work building the characters paid off, as we felt ourselves emotionally invested in the fate of our heroes.

The one sour note in the movie happened at the very end. They closed the movie with a voiceover recited by Bennett. I’m suspicious of voiceover, which is an overused gimmick. Though no doubt there are movies where voiceovers are used effectively and are integral to the story—I’m thinking of American Beauty (1999)—in many movies they are added because the filmmakers or—more likely—the production company feel something needs to explain the movie. Since this was the only voiceover in the film, I fear this is what happened: some producer or studio executive refused to let the images speak for themselves. The images needed no help. This was a beautifully shot film, and Faqua and cinematographer Mauro Fiore did a wonderful job framing the scenes.

Rating the three movies, Seven Samurai is my favorite. The story of gathering seven warriors to defend the weak originated here, and it deserves credit for that. But this year’s The Magnificent Seven comes in second, with the 1960’s version bringing up the rear. All three movies are entertaining, and I recommend them, but I prefer Faque’s version to Sturges’, because it has an emotional impact that the previous film lacked. Its character development and emotional stakes is a better translation of Seven Samurai, which is less an action movie and more an emotional drama. So as we go into the weekend, if you’re wondering what movie to see, The Magnificent Seven is a correct choice. 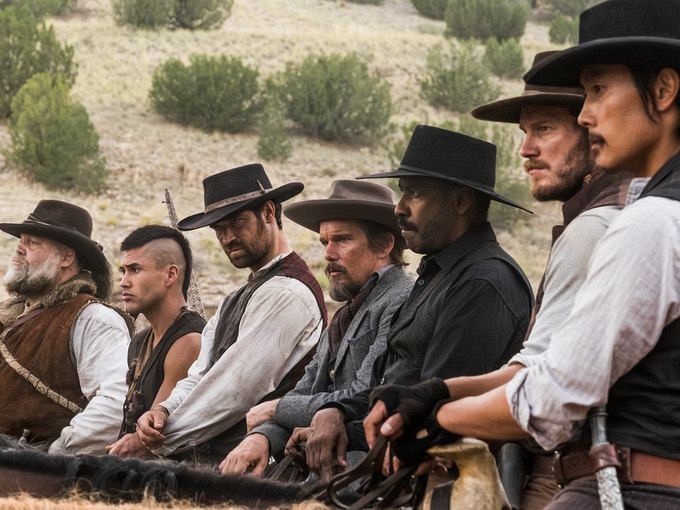