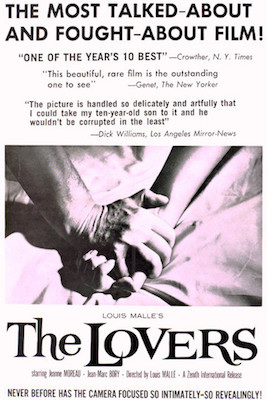 In 1959 the Heights Art Movie Theater in Cleveland showed the French film Les Amants (The Lovers). The theater manager, Nico Jacobellis, was promptly arrested for showing obscenity, convicted, and fined $2,500. Justice served! Menace to society punished! Not so fast. In 1964, when Jacobellis v. Ohio went before the United States Supreme Court, the court reversed the conviction. Though the majority of justices agreed that Les Amants didn’t constitute pornography, they disagreed on why not. The most famous opinion came from Justice Potter Stewart:

I shall not today attempt further to define the kinds of material I understand to be embraced within that shorthand description [pornography] ; and perhaps I could never succeed in intelligibly doing so. But I know it when I see it, and the motion picture involved in this case is not that.

I don’t remember when or why I placed The Lovers—I will refer to it by its English title—on my Netflix queue. I was a little surprised when it came in the mail, but since it was the Netflix movie I had, I watched it. As I mentioned before, in my review of Breathless, I’m on a quest to understand movies and to learn more about film history. That means watching movies that I wouldn’t normally be interested in. So when I received The Lovers, it provided me with an opportunity to see a movie that I knew nothing about. What will I find?

Louis Malle directed The Lovers. He’s a director who would again stir controversy with Pretty Baby (1978), starring a young Brooke Shields as an adolescent girl working in a whorehouse. He had also brought us such interesting films as Atlantic City (1980), My Dinner with Andre (1981), and Damage (1992). I don’t pretend to be an expert of Malle’s career, but from this list of movies, he seems to be a director who film characters on the fringe of society. They are the misfits, the prostitutes and the gangsters, the philosophers and the adulterers. With such focus, is it any surprise his movies created controversy?

In The Lovers, Jeanne Moreau plays a housewife, Jeanne Tournier, living two lives. In Dijon, she shares a luxurious, though provincial life in a country manor. Her husband, Henri, runs the local newspaper. Whenever she can, she travels to Paris, to her second life, where she socializes with her childhood friend, Maggy, and runs around with her lover, Raoul, a Spanish polo player. She loves the city life with its energy, its nightclubs, its active social scene. Despite having the best of both worlds, she still suffers a vague discontent. This surfaces when she meets Bernard, a nonconformist, who stands as both a contrast and a commentary of her settled and predictable life.

This is a simple movie, with a simple plot. A man and woman, feeling mutual attraction, spend an erotic night together. In our modern world—with NC-17 movies, Game of Thrones nudity, and Internet porn—we would find nothing shocking in this movie. It seems surprising that it was the cornerstone of such an important legal case. The movie hardly seems worth mentioning. As I was watching it, I asked myself: Am I enjoying it? It bored me, until Bernard, played by Jean-Marc Bory, was introduced. Recognizing his role as the outside entering a stable, if somewhat dysfunctional, society I felt my interest grow. What will happen next?

In my final verdict, I found The Lovers is more interesting for its role in the United States censorship laws than as a movie in its own right. I would recommend it only to movie viewers like me, who’s on a quest to understand film in all its forms. Or I would recommend it to the student of censorship, to see how innocuous victims of censorship can be, how uncompromising the censor’s razor. It’s not that it’s a bad film, but there are better dramas out there, and better French films—many directed by Malle himself. But watching it incited an interest in Malle, and I’m planning on seeing more movies by him. Next on the list, will be his Elevator to the Gallows.

Jeanne Moreau and Jean-Marc Bory in The Lovers